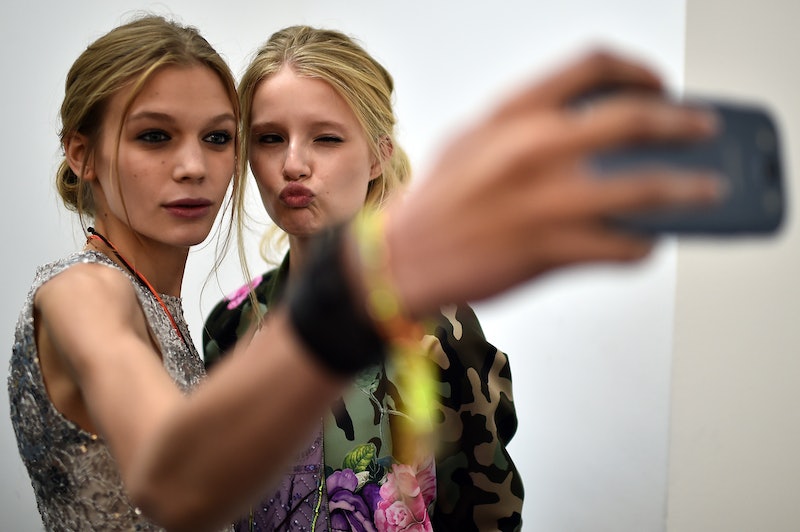 Selfie snappers, we're on to you. A study conducted by FeelUnique found that women take seven selfies before posting one. Sure, in the grand scheme of photos on your iPhone, that's not a huge percentage. At least we can all be assured that no one go that perfect selfie shot on the first snap.

FeelUnique, the beauty site that conducted the study, surveyed 2,000 women. Along with finding out how many selfies they took on average, the study also found that women will only post to two social media sites. That might not seem like a lot, but when you delve into the study a little deeper, it starts to look a little scarier.

When it comes to 16-25 year olds, 10 percent of them have approximately 150 pictures of themselves saved on their device. But these pictures aren't all taken (or posted) just for the likes. Approximately 14 percent of women admitted to posting them to make their followers jealous, while another 15 percent posted them to get to an ex. At least there are the 18 percent of us who snap selfies to feel more confident! IMO, that's the best reason ever to post a photo. Screw all the haters.

Coming from someone who doesn't really take part in the whole #selfienation movement, I can't say that these stats are personally true. But according to all my social media friends, I wouldn't argue that this study's findings are wrong either (no shade, I swear). You selfie you, girl.

Check out the inforgraphic from the study to get a closer look at what else they found.

Shout out to all the selfies I didn't know were taken on the toilet. Way to be, guys.