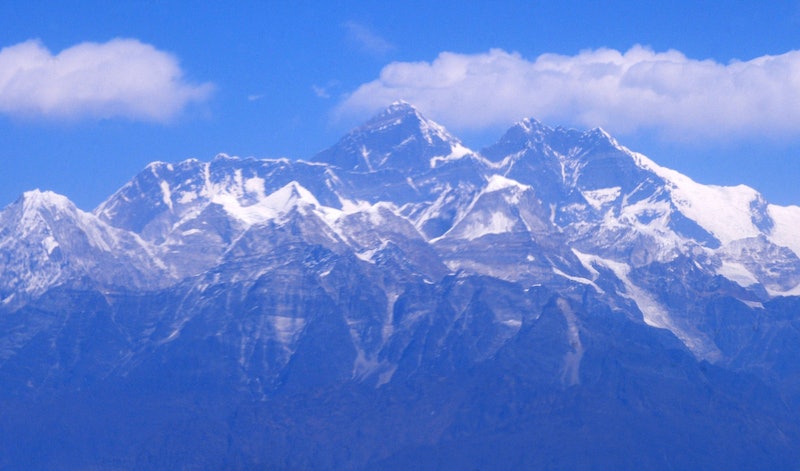 As Bustle previously reported, a massive earthquake struck Nepal’s capital Kathmandu early Saturday morning. According to CNN, nearly 1,500 people are dead, and even more are feared trapped beneath the rubble in what is shaping up to be one of the area's worst tragedies in history. Even more devastating, the 7.8 magnitude quake triggered an avalanche at the Mount Everest base camp, killing at least eight climbers. The quake also impacted Nepal’s neighbor India, where 34 deaths have been reported.

As can be expected, photos and video footage of the area impacted by the earthquake reveal a harrowing scene of the aftermath filled with chaos, shots of the Pashupatinath Temple (which appears to have suffered minimal damage), as well as troubled climbers who were attempting to reach the peak when the huge tremor struck. As the world's highest peak, Mount Everest is tragically known for its numerous fatal incidents just as much as it is for its staggering height and astounding beauty. Despite its well-documented danger throughout an extensive history of climbing attempts, each year Mount Everest continues to attract a steady stream of visitors hoping to scale the 29,000 feet it takes to reach the summit.

Unfortunately, the tragic earthquake that hit Nepal is only one of many deadly incidents to affect the area.

Here are the most devastating, tragic, deadliest disasters to take place on Mt. Everest:

The Nepal earthquake comes nearly a year to the date of the mountain's last major disaster which occurred last April after an avalanche swept through an area near Everest Base Camp, killing 16 Nepalese guides.

In 2012, a total of 10 people died during various attempts to reach the mountain's peak.

During an attempt to reach the summit in May, eight climbers perished when a blizzard struck the mountain.

In 1970, six Nepalase sherpas died when an avalanche hit the Khumbu Icefall, which is widely regarded as one of the most dangerous areas on the South Col trek to mountain's summit because it is part of an active glacier.

1974 Death of Gerard Devouassoux and Sherpas

Gerard Devouassoux escorted a team of 19 climbers up the treacherous path to Mount Everest's summit, however monsoons triggered an avalanche on Everest's West Ridge that killed Devouassoux and five sherpas as they slept. Sadly, their bodies were never recovered.

In May 2012, Chinese officials reported the deaths of four climbers who successfully reached the summit, but were killed descending the mountain's southern slope.

The Death of George Mallory

In June of 1924, British explorer George Mallory and his partner Andrew Irvine set out to scale Mount Everest, but eventually went missing. Mallory's body was only recently recovered, 75 years after his climbing attempt. Images: Getty Images (7)