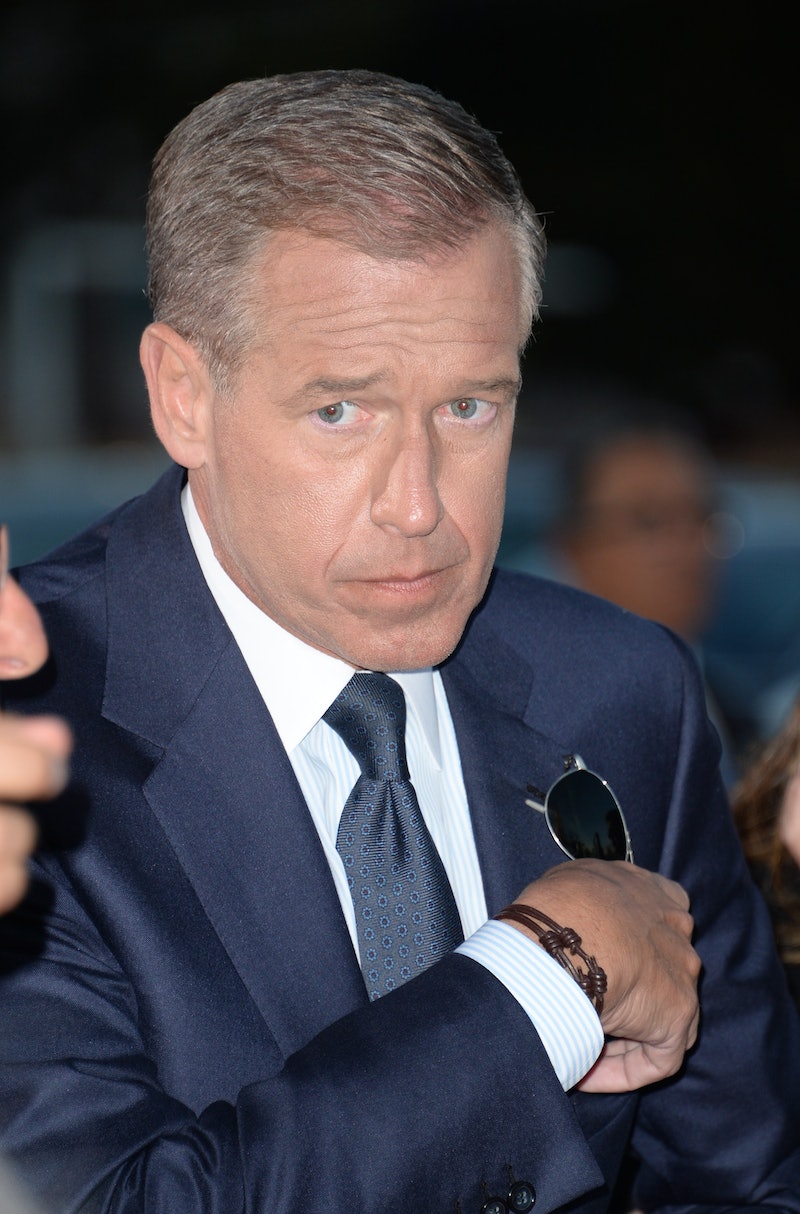 Things sounds like they're getting worse for former NBC Nightly News anchor Brian Williams. According to reports from the Washington Post and Yahoo News, among others, NBC's Brian Williams investigation has widened, thanks to ten stories (at least) that the investigative team now reportedly suspects Williams may have allegedly embellished or lied about. Neither NBC nor Williams responded to Bustle's request for comment.

It's yet another chapter in this dizzying, shocking story, charting the potential downfall of a man who was one of the country's most trusted, high-profile anchors mere months ago. Williams' journalistic credibility was first called into question earlier this year, when some U.S. Army veterans challenged his account of coming under enemy grenade fire in a helicopter in Iraq back in 2003, forcing an on-air apology. Subsequent investigation showed how Williams' account of the events had mutated over time, as he'd told it in public frequently over the years, and NBC News decided to suspend him for six months.

Since then, according to the Washington Post, NBC's investigation (helmed by Richard Esposito, the senior executive director of NBC News) has turned up a number of similarly concerning stories from Williams' career. Not all of the stories NBC is investigating are a matter of public knowledge right now, but there are two prominent ones that the Post's report cites — his account of a near-miss rocket-fire incident while riding in an Israeli helicopter in 2006, and a dramatic story he toldThe Daily Show's Jon Stewart about reporting from Egypt's Tahrir Square in 2011.

Even when the accusations surrounding his truthfulness were contained to just one story, in the very early days of the controversy, there were reports of tension within NBC whether to keep him. In particular, it was widely reported that longtime NBC News stalwart Tom Brokaw allegedly wanted him fired. If the official investigation uncovered a slew of more stories he allegedly may not have reported honestly, this, to put it lightly, does not help his case.

Williams is still under the six-month suspension he received on February 10, meaning — for now, at least — he'd be eligible to return to the air in August.

It'll be fascinating to see where this story goes next, especially if any more cautionary details emerge. After all, it's not as though there aren't other capable people at NBC, with a lot less baggage — such as Lester Holt, who's been the interim host of the NBC Nightly News in Williams' absence.