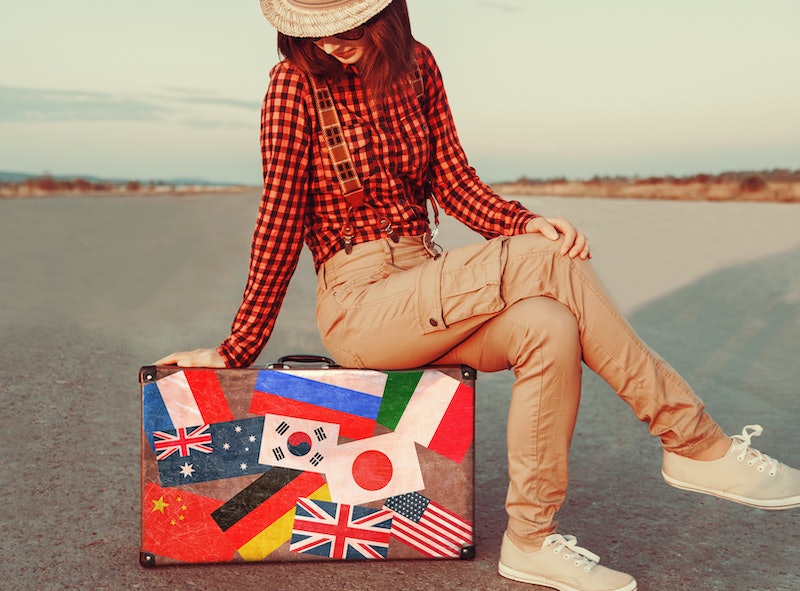 Have you noticed that this year’s trends have revolved around a “less is more” mantra? The minimalist trend is what it's all about now. Gone are the days of semi-opulence that called for brocade patterns, old Hollywood waves, and giant look-at-me prints that were popular just the year prior. Instead, the non-beauty trend kicked into high gear with natural makeup, naked eyes, and hair that looks air dried and slept-in. Minimalism came around in a big way, rolling in clean lined shoes and unfussy dresses, and a color palette that subscribes only to neutrals. And it seems that everyone has been trying their hand in curating a capsule wardrobe, making the effort to pare down their stuffed closets to pieces that only, and very clearly, speak to their style.

And the appeal to all of this? It leads you to try and live a more intentional life. The theory is that by focusing less on the material, you have more time to focus on the fun parts of living. Possessions weigh you down, both mentally and emotionally, and when you have less cluttering up your mind, you have more room for other experiences. By not buying that bag, you can go get fancy cocktails that fizz at that password-only bar. By not being tied down with a mess of things in your apartment, you can break away for two months and go take that Argentinian trip you’ve been planning since you got your first paycheck. Go ahead: Sub-lease your room to a stranger. There’s nothing that they can take or ruin that will break your heart. Or, by not having a scary number on your credit card bill, you can choose to go on a weekend trip with a girlfriend just for the hell of it. Windows down, feet on the dashboard, and nothing but the promise of the road till come Monday. By having less, you live more.

But like with most things, moderation is key, even when it comes to moderation itself. We’re all a motivated bunch and when we jump into a goal we jump in with both feet. Because of that, that goal soon becomes as consuming as the very thing it replaced in our lives.

You can find yourself becoming obsessed with hunting down the perfect curated capsule wardrobe, or itch to find the best minimalist sandals. Or you can go the other way and start denying yourself too much, making yourself unhappy in an unsustainable lifestyle.

If that happens, even though you decided to take a cleaner approach to life, you haven’t really decluttered or changed anything. You just found a new outlet to channel it through.

But that’s the thing: Minimalism, in all its forms, isn’t the goal. It’s a tool. The focus shouldn’t be about succeeding in it or sticking to it, but about what it teaches you along the way, and that’s not something we’re not always cognizant about. If you fail at it one day, think about why you failed. Was it because you felt something missing in your life, or was it just a weak moment? Did breaking your spending ban make you happy at that moment, or did you regret it a day after?

There was a reason you decided to try out this simpler way of living, and it’s important to see if you’ve become happier as a result of it, and if your attitudes and goals have changed because of it. So below here are a few lessons I’ve learned by paring down my own life, and I encourage you to do the same. That way you’re using your tool, and not just going along with a trend:

If you saw my closet a year back, you’d be equal parts horrified and impressed. Sleeves, sleeves coming out of every nook as far as the eye could see.

And I kept buying more because I had a need to fill my life with pretty things. The new tap of ballet flats put a smile on my face, an apron with all the frills made my heart happy, and quirky coffee cups gave me a purpose in life. These types of things make a soul happy. And I still have that need, but now I do it with more of a game plan.

By limiting my chances to shop, when I would finally pick up a new piece it would feel incredibly special. It felt like I was buying myself a token or a gift just because. You know how you can’t stop the pleased smile when a friend buys you something for no other reason than they thought of you at that moment? That’s how that small surprise feels.

You appreciate your treats to yourself more because they’re few and far between. And because of that, you truly value and appreciate them.

Lesson 2: My Possessions Have Been Making Me Miss Out On A Lot

It’s a peculiar thing, having a pretty wardrobe but no chance to wear it because you’re flat broke. The ridiculousness of that point was made clear to me about two months into my foray with minimalism. I cut myself off from buying any new clothes, but had a moment of weakness when I stumbled across a sheer Peter Pan collar dress on Etsy. I didn’t need it, but wanted it just because it was frivolous and fun. Treat yo’ self and all that.

Then the weekend came around and my friends wanted to dress up and spend an evening at a posh, grown up restaurant in downtown Chicago. This was a place where the bartenders looked like they were mixing potions and the seats were made out of white leather. It was a place that called for vampy red lips and heels that would elegantly click across marble, and I was more than excited to join in on the fantasy for a night.

But… I couldn’t. I already shelled out that amount on the dress, and I couldn’t convince myself I felt fine dropping that same amount again, all in the span of one week. I had to bow out and, instead, content myself with spying on them jealously through Instagram. As I sat in the darkness of my room. Drinking boxed wine. It was a sad night.

Lesson 3: Minimalism Isn't About Thriftiness, And Shouldn't Be Treated As Such

This has to do with my point of how minimalism shouldn’t be the goal, but the tool. I found myself becoming wrapped up in the idea of not spending money and living simply, to the point of guilt. A few weekends back my friend proposed we go rent a car and drive down to New Orleans just for the sake of it. She wanted to wear flip flops and drink Pimms Cups, and she wanted them now. Loving the spontaneity of the whole thing, I happily accepted. And then fretted about how much I was spending the whole way through. Have you ever bought a Hurricane cocktail on Bourbon Street? It costs you a cool Jackson.

But that’s the thing: This was exactly why I wasn’t buying dresses and flatforms and purses. It was so I could go on 15 hour road trips and drop money like it’s hot when crawfish and bread pudding were proposed. I lost sight why I decided to live minimally and instead decided to just be thrifty. Without taking a step back and thinking of why I was using the tool to begin with, my goals became warped.

So now it's your turn: Why are you taking a simpler philosophy towards life? And what has that tool taught you?