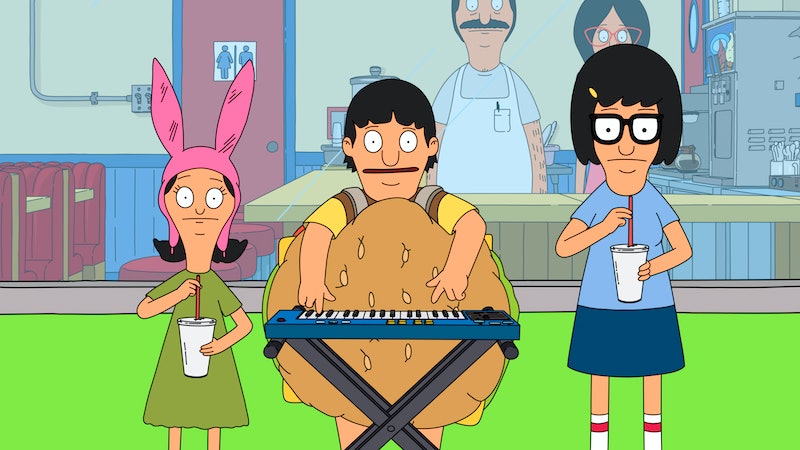 Fox's Bob's Burgers has a fiercely loyal following, a great social media presence, and an Emmy Award for Best Animated Series. So, what's the show's big secret to success? Creator Loren Bouchard says blending music and animation has been a winning combination for Bob's Burgers , according to an interview in the Hollywood Reporter. "It's partly just our sweet little characters," he said. "I would think, secondarily though, that animation and music go together really well. I think back to The Muppet Show a lot, and to some extent even Sesame Street and Schoolhouse Rock, all the Disney movies; these things are really bonded together in a really fundamental way."

No wonder family matriarch Linda Belcher (voiced by John Roberts) has a penchant for musical theater and chanting in the series. Bouchard also revealed that he has a theory that music helps viewers bond to animated series in a different way.

"I don't have any science to back this up, but — there’s a lot of research out there that proves music enters our brain in a different way," he said. "My theory, is that I think animation my enter your brain in a different way, too... I'm starting to suspect that when you like a character that's animated, it goes in a little deeper and might light up some of the same parts of your brain that music does. So in a way I think we're doubling the potency of our formula. Maybe unconsciously without really thinking about it."

Then it's no wonder so many classic animated series have featured songs over the years, like The Simspons, South Park, and Family Guy. Here are five that have gotten stuck in your head — and will again if you press play on those YouTube videos below.

"The Monorail Song" From The Simpsons

The long-running perennial favorite Fox animated series has tons and tons of songs to choose from: "The Bartman," "You Don't Win Friends With Salad" (sorry vegetarians), and so many more. But it's this classic from an 1993 episode called "Marge Vs. The Monorail" that is an eternal favorite. Sham salesman Lyle Lanley (voiced by Phil Hartman) shows up at a town meeting to pitch Springfield a monorail and this musical number ensues.

Conan O'Brien wrote the episode before he became a late-night talk show host and today still gets people asking about the song, which was inspired by The Music Man. He even performed it at The Simpsons 25th Anniversary Concert last year at the Hollywood Bowl in Los Angeles. "Here it is, 22 years later, and people still come up and want to talk with me about 'Marge Vs. The Monorail,' and they can quote from it and I can’t," O'Brien told Buzzfeed last year. "I’ve forgotten it all."

"What Would Brian Boitano Do?" From South Park

Not only are Trey Parker and Matt Stone animation geniuses, but they're also musical geniuses. Their musical The Book of Mormon is still a smash hit today and swept the Tony Awards. But even before Parker and Stone brought their talents to the legitimate theater stage, they were making music on their long-running Comedy Central animated series. There are tons of amazing songs from the show's run, including its big screen movie in 1999.

"What Would Brian Boitano Do?" is a random and fun song from South Park: Bigger, Longer, and Uncut that is so catchy that it's stuck in your head more than 15 years later. "We've had musical stuff in the show forever," Stone told Pitchfork. "That's mostly because Trey's a big musical fan, and he's a great songwriter. He's been writing songs his whole life. So since the beginning, we've always put a lot of musical moments. The movie [South Park: Bigger, Longer & Uncut] is a good example of taking it and making a whole musical."

Creator Seth MacFarlane is a fan of bursting out into song, too — remember when he awkwardly hosted the Oscars? So Family Guy has done its send up and parodies of plenty of famous tunes. One is the internet classic earworm "Peanut Butter Jelly Time," which Brian sings while dressed in a banana suit for Peter in the Season 4 episode "The Courtship of Stewie's Father."