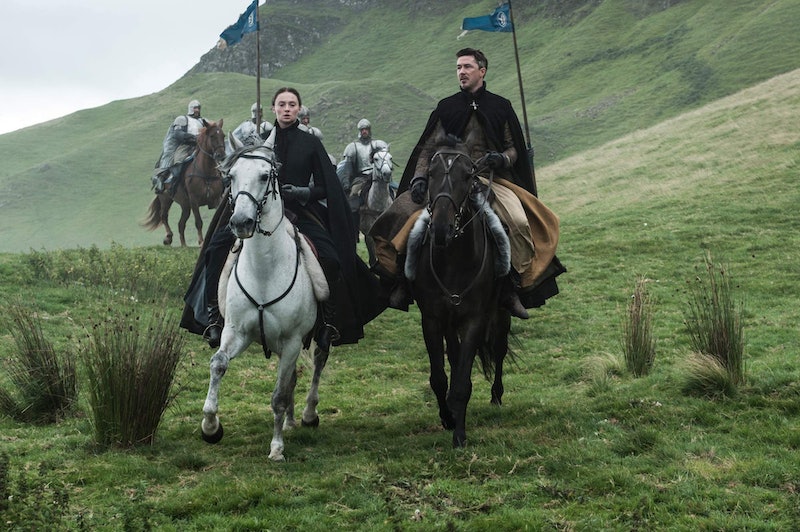 Well, we knew this day was coming — the Game of Thrones TV show is different from the plot of the book, and that official break between the mediums occurred starting on Sunday night. But, even though we've been warned about this moment for months and months now, and even experienced it on a smaller scale in previous seasons, all you need to do to prove that fans were unprepared for the divergence is to spend a couple minutes on Twitter. People have come out in force, with a wide range of emotions and reactions to the explosive plot twist. In case you didn't watch Sunday night's episode of Game of Thrones, I can catch you up on what happened, but I do want to reiterate that there are serious spoilers ahead. Even those among us who've read the books and are used to the smug feeling of knowing what's going to happen will be surprised by this turn of events, so consider yourself warned.

If you're still here, I'm assuming it's because you're ready to get your world rocked by the dirty details of the GoT episode "High Sparrow." If not, leave now or forever hold your peace.

Okay, no more warnings. Here we go. In Sunday night's episode, the third of the fifth season, Littlefinger finally revealed his plans for Sansa Stark, whom he's been holding onto ever since rescuing her from King's Landing in Season 4. When we left Sansa in the fifth and still most recent book, she was still at the Eyrie, being fawned over by Littlefinger, who clearly wants to get it in. But, in the show, he recently revealed very different plans for her: namely, marrying her off to Ramsay Bolton.

Whaaaaaaaaat??? Engaged to yet another psychopath who delights in the torture of others? Girl cannot catch a break, and fans of the series took to Twitter to express their surprise in a variety of different ways:

Thank you so much for the reminder!

We'll see about that!

Stop trying to make Sansa and Littlefinger happen. They're not going to happen.

Chick has a type.

Nice of her hubby to weigh in.