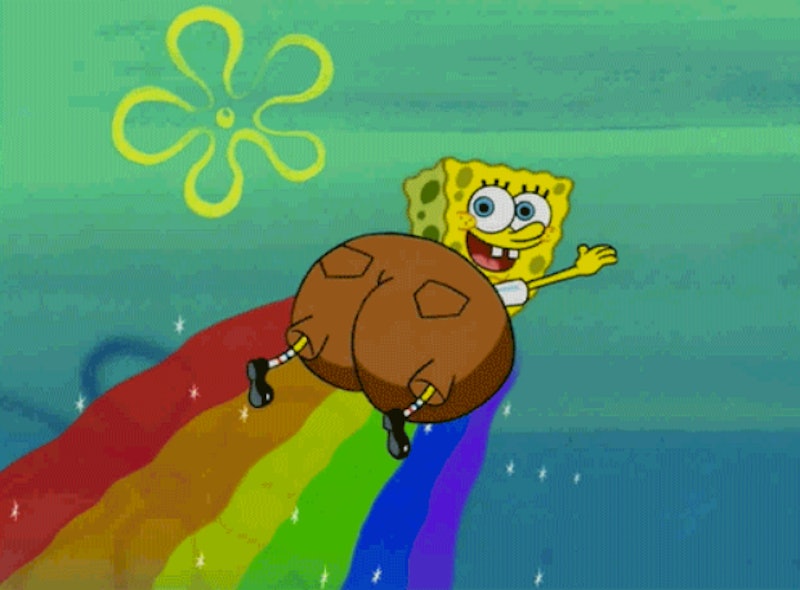 I've always liked J. Law, but that affinity tripled when she preached pure gospel truth last fall: Your relationship is real when you can fart in front of each other. That ability and freedom speaks to a very specific comfort. It's the pinnacle of intimacy, for sure, albeit probably not a very cinematic or fairytale one, in most people's (WRONG) opinions. Farts, though, have a bit of a secret identity, if you will. The gas we pass through a certain channel gets a bad rep, but in reality, it can be pretty interesting, telling stuff. There's a lot you don't know about farts. (Most likely.)

There's seriously no point in ignoring farts. They are a part of literally every person's daily routine. The average human breaks wind between 10 and 20 times a day. Be it farts' notorious aroma component (which, to be fair, does not apply to all farts) or the fact that, well, they enter this mortal world via the portal that is our butts—whatever the reason, farts have been relegated as general taboo, allowed to emerge only in joke form and only in certain circumstances. Whatever. I propose we all call BS on this silly practice and start our collective rejection of a fart-fearing culture with a little education. For starters, here's some interesting facts about farts that's probably new information to you:

Holding it in may cause major health repercussions

Please note: I'm not advising you run around cutting the cheese constantly. Hear me out. Remember, farts are essentially a cocktail of various gases—mostly nitrogen, hydrogen, carbon dioxide, and methane (only a tiny portion of that actually smells). When your body naturally wants to push something out and you consciously won't allow it, it's not like all that flatulence disappears. Instead, the gas can erode parts of the intestinal wall, creating pockets called diverticula. And if the diverticula get infected, the painful condition diverticulitis may develop. Also, weak spots may develop along the colon which ain't no picnic.

Because, when you're knocked out, how could you ever hope to hold that in? You can't! Therefore, you potentially risk a newly-snagged sexual conquest overhearing your unconscious butt trumpet. That is, if you don't hear them first—because according to this very official Reddit chain, sleep farting is normal.

Typically, it's safe to assume bottoms are clothed while farting. That clothing acts as a filter, combing the wind any potentially passes bacteria—primarily streptococcus pyogenes , which can summon all sorts of upsetting health issues including actual skin-eating disease. But without that first line of clothing defense, there's no telling.

One denizen of the Internet recorded his farts as vocals for a metal track. Thankfully, it's been about a year and a half since its YouTube unveiling and it doesn't appear to have become a trend. Yet, it's one subgenre option, I guess.

Your own farts smell less bad to you because of #science

It's not just an ego thing, as it turns out. We tend to find our own flatulence way less offensive than anyone (or anything) else's on this planet. That's because that smell is familiar to you. Think about it: If each of your own 10 to 20 farts a day hit you the same as a stranger's on the train, you'd hardly have the brain space to accomplish a single thing ever. It's called survival and it's not so bad.

One guy tried to market farts from around the world

True, "exotic farts" may have a market somewhere, that market is apparently not online. Despite a Kickstarter campaign, fart in a jar did not meet its fundraising goals and therefore—hopefully—will never actually materialize.

A recent study suggests small whiffs of hydrogen sulfide gas (present in human farts) could help prevent all sorts of scary stuff like arthritis, cancer, and heart disease. Although there's no concrete conclusions about this, it seems a viable defense when "Dutch oven"-ing a partner. Except, um—

"Dutch oven", for the uninitiated, is when you trap a fart under blankets (or as one ex did to me—a big parka) then pull said blankets over someone's head. Rumor has it that a man accidentally killed his wife by a Dutch oven gone "horribly, horribly wrong." She supposedly died in 30 seconds. This is probably a totally fabricated fable, but still, possibly worth considering when planning your next prank on your partner.

Termites fart the most

It's true: termites fart the most out of all the animals running 'round (including humans), second only to camels.

The old schoolyard mantra is unfortunately correct. Beans have these ginormous sugars in them that make "the musical fruit" truly tougher for your system to digest. Since they travel through your digestion system fully intact, they—um—kinda scoop out all the bacteria chilling in your colon. Hence, farts. Sorry, hummus fans.

Beer makes you fart more, too

A huge culprit in brewing up extra farts is simple: more swallowed air means more flatulence. That means an affinity for carbonated beverages like beer and gum might make make you a less-than-savory bedfellow (to some). At least this kind of fart usually doesn't stink. So if you're gearing up for a hot date, maybe opt instead for wine or something else less fizzy while sidled up to the bar with your cutie. Or—I don't know your life—pound beer and/or seltzer and test this new person out early on. Can they deal? If so, perhaps consider marriage.