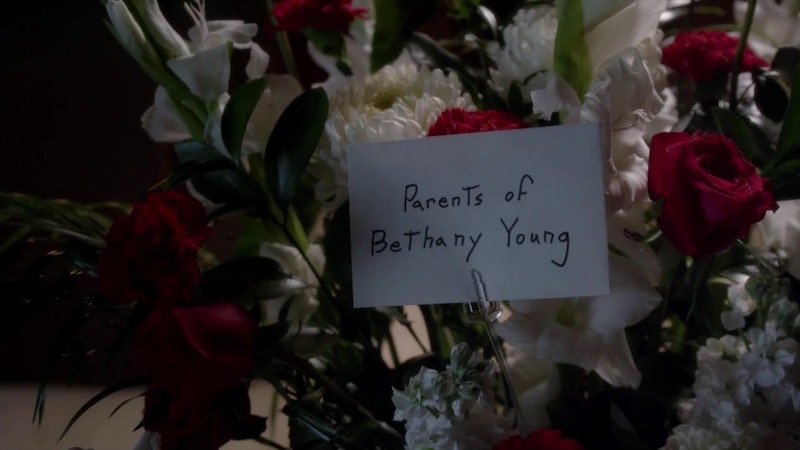 Just like many fans, following the Season 5 finale, I fell down a giant Pretty Little Liars rabbit hole that I have yet to come out of. "Welcome to the Dollhouse" promised to answer questions for us, but for every resolution it delivered, only a million more questions followed. The most significant example of this is the reveal that Charles is Pretty Little Liars' Big A, because now we have to question his apparent family ties to Ali. Their connection was implied by the home movie that played at the very end of the episode, showing Mrs. DiLaurentis holding a baby whike talking to two young blonde boys, who I believe to be Jason and this new mysterious Charles. After the finale, I orginally assumed that Ali was the baby in Mrs. DiLaurentis' arms, but now I'm not so sure. Could the baby in the home movie actually be Bethany Young?

One of the big things that will eventually be revealed when PLL returns is Charles' identity, but that's not the only mystery Season 6 needs to answer. There are still loads of questions about Bethany that haven't been answered, and in some twisted way, everything might actually be connected. Parts of this mystery already are: we know Bethany was the girl buried in Ali's grave this entire time, we know she was at Radley, and we know she had some ties to Mrs. DiLaurentis. If we take all these pieces and try to build something out of it, our answer just might lie with the fact that Bethany's been wrapped up with the DiLaurentis family this whole time. While we might have been writing her off as someone "random," she is most certainly not.

It's been explained during past episodes that Bethany wasn't from Rosewood, but was admitted to Radley because she often went through psychotic episodes. While there, Mrs. DiLaurentis took a liking to her. She was on the board at Radley while Bethany was a patient there, and the two became friendly. Mrs. DiLaurentis would often take Bethany out of Radley, and to some stables in Harrisburg where she rode a horse named Custard.

Does anyone else find these things odd? Mrs. DiLaurentis had her own children at this time, so why was she spending so much time with this other girl locked up in a psychiatric facility? Why was Mrs. DiLaurentis on the board at Radley to begin with? That whole scenario has never been explained, but it might have been because Bethany was inside, and Mrs. DiLaurentis wanted to be closer to her daughter. This whole time I've been assuming that Charles was the long lost DiLaurentis kid, and he still could be, but he might not have been the one in Radley. It could have been Bethany, and that's why Mrs. DiLaurentis joined the board.

A piece of the Bethany puzzle we do know for certain is that Mrs. DiLaurentis and Bethany's father were having an affair. There hasn't been any mention of exactly how long it went on, but we do know it ended at some point. That's one big PLL secret that has been exposed.

What if Mrs. DiLaurentis had a daughter with Mr. Young, and then for unknown reasons, somehow the baby ended up in the sole custody of the Youngs. Did Mrs. DiLaurentis pretend that she lost the baby somehow? Did she and the Youngs come to some agreement that Mrs. DiLaurentis and the child were never to interact? Maybe the baby was sent to live with another family because Charles, Mrs. DiLaurentis' son, was having violent outbursts and they wanted to keep the baby safe. There a ton of ways this could go, but the point is Bethany could easily be the infant we saw in the home movie. There's nothing that guarantees the baby is Ali.

Maybe Mrs. DiLaurentis started visiting Radley in an attempt to make up for lost time. There's also the fact that Bethany began drawing pictures of Mrs. DiLaurentis while in Radley. Aria found one of these while she was volunteering, and the picture shows Mrs. DiLaurentis watering her flowers, with some sort of beast right next to her.

It seems like once Bethany learned about the affair her father and Mrs. DiLaurentis were having, the two did not get along. Could it have been because Bethany learned that Mrs. DiLaurentis is her mom, and the thought of her biological parents getting back together was too much for Bethany to handle? If Bethany was already struggling with mental heath issues, then learned her family isn't what she thought it was, only for her biological mom to come strolling into town trying to make everything better, I wouldn't blame her for not being OK with it.

And here's one last thing to consider: maybe it was actually Bethany who befriended Ali, not the other way around. Ali lies. Who says she couldn't have lied about this? Bethany may have eventually come around to the idea of her "new" mom, and was trying to get close to her. That's why she was in the DiLaurentis' back yard the night this whole incident started — and that's why Mrs. DiLaurentis was so freaked out when she learned someone had escaped from Radley. She knew Bethany was coming to see her.

Crazy enough theory for you? I'm just thankful that PLL comes back in five weeks, so I can slowly start climb out of this theory-hole. It's dark down here.

More like this
Everything To Know About The 'Pretty Little Liars' Reboot On HBO Max
By Mary Kate McGrath and Jack Irvin
Everything To Know About The Summer I Turned Pretty Season 2
By Kadin Burnett
Everything You Need To Remember Before Westworld Season 4
By Brad Witter
Why Simone Ashley Had To Study Snails For Intimacy Training, Pre-‘Bridgerton’
By Grace Wehniainen
Get Even More From Bustle — Sign Up For The Newsletter