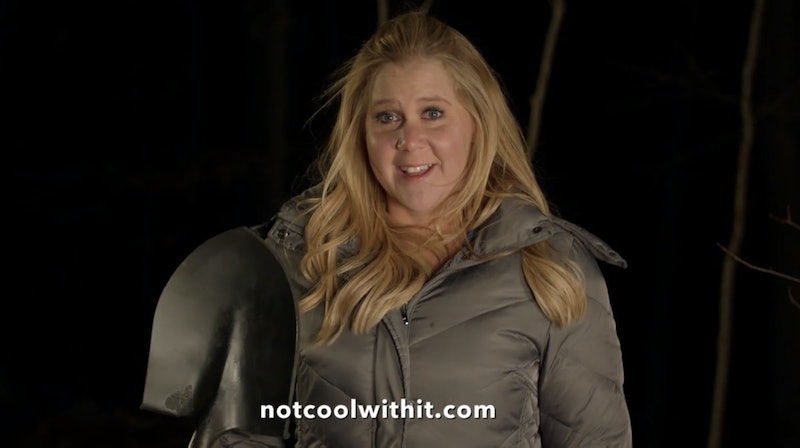 One of the reasons I love Amy Schumer most is that she basically exists at the intersection of funny and offensive, which is my favorite place to live — especially because one of the fastest ways to get people's attention on an important issue is by mildly offending them first, and that seems to be exactly Schumer's game plan. On Tuesday night's episode, one Inside Amy Schumersketch takes on the wage gap via a pretty ridiculous sketch, and even though Schumer's methods are the antithesis of conventional, they're crazy effective.

It's not like it's a shocker or anything: Women have been getting paid less than men for the same job since the beginning of time, and minimum wage workers haven't been getting paid enough to live on since the first paycheck was ever delivered to cavemen by a T-Rex. But in the midst of a completely over-the-top sketch of office workers hanging out together after work, Schumer forces her audience to think about how unfair payment can drive a gal to do some pretty crazy things, and she just happens to use a mostly-dead stripper to do it. And it totally works.

Basically, Schumer and her male coworkers are at a strip club, doing very normal afternoon activities like doing shots and venting about their work week. In an attempt to be one of the boys and be, you know, "COOL WITH IT!!!," Schumer gets way too drunk, pays for the champagne room, and while one of the guys she works with is gets kinky with one of the strippers ("totally normal choke stuff"), she goes unconscious. Drunk Schumer's solution? Just bury her and act like nothing happened, because it's fine, guys, she cool with iiiiit.

And, in a situation most women who have ever worked in a male-dominated workplace (or any workplace in general, really) can understand, the guys quickly leave Schumer to do the literal dirty work of burying the stripper, which is the perfect time for a quick PSA on the very real pay gap. Boom. And you thought you were just in for some giggles. Nope.

I'll just be here doing 100 percent of the work even though at work I make 78 cents on the dollar! Hi. I'm Amy Schumer and I'd like to talk to you about an important issue: The wage gap for women. Write to your congressperson today and tell them you're not cool with it. Or just support raising minimum wage. Two-thirds of minimum wage workers are women.

Gets the job done, and the website that flashes at the bottom of the screen — notcoolwithit.com — redirects to the Institute For Women's Policy Research's page on pay equity and discrimination. Get educated, y'all.

And don't worry. The stripper's OK.