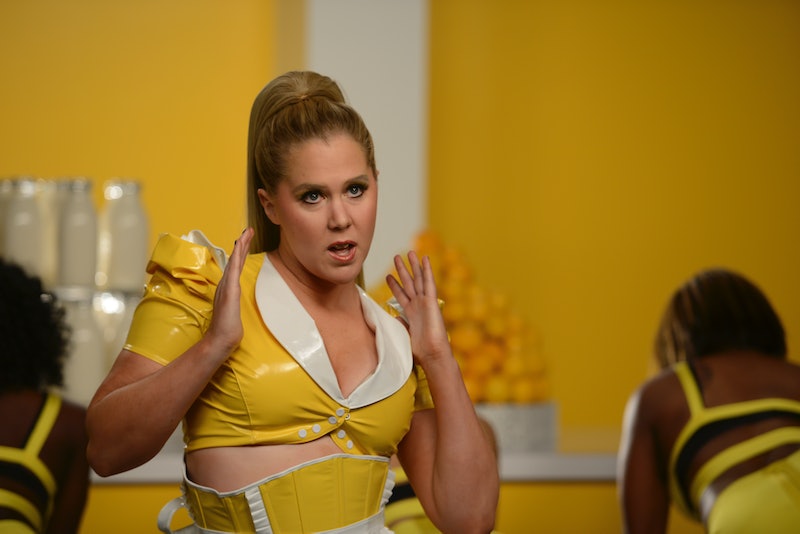 It's kind of starting to feel like April is the month where my inner clock tells me to hop online and praise Amy Schumer for six to ten paragraphs, because for the third year in a row, homegirl and her writing team have put together a killer set of episodes for Inside Amy Schumer . And once again, it's not all milk and lemonade (that's the phrase, right?). The Inside Amy Schumer Season 3 premiere is bolder and brasher than anything we saw in Seasons 1 & 2, though there were signs that Schumer and Co. would reach these heights eventually. Seasons 1 & 2 were like the girl who decides it's a great decision to bring up abortion via Jenny Slate's Obvious Child at Easter dinner. Season 3 is the girl who builds a full on crime board of every man she's ever so much as made out with at a dark dive bar and presents it on Christmas morning. And it is glorious (and not just because it's brave enough to open with a song that makes you sing "this is where my poop comes out").

Back in Season 2, Schumer debuted — among many buzzier sketches — one that saw Amy and her boyfriend playing a game obviously modeled after Call of Duty. When Amy tries to play, she opts to play as the singular female avatar, against her boyfriend's warnings. You see, when you're a woman in fake Call of Duty, you don't actually get to play the game. You get assaulted by a fellow soldier, then guilted about his ruined family for reporting it, and finally attacked in court for "what you were wearing" or "not being a team player." The sketch is brutal and honestly, kind of depressing, but with enough comedy from the bluntness of the video game narrator to the disbelief from the token boyfriend. While we were right to chatter about last season's The Food Room with Josh Charles and the hilarious "I'm so bad" ladies brunch parody, this vicious video game sketch from Season 2 seems to inform much of Season 3's direction.

In Season 3, immediately after we're introduced to Amy's world via the butt-themed music video that simultaneously objectifies and totally breaks down the female posterior, we dive right into another TV parody featuring Josh Charles. This time, he's taken on the Coach role in a Friday Night Lights parody about rape. Much like the video game sketch before it, this FNL sketch finds the ridiculousness in the common thread between young football stars and a misunderstanding of sexual assault. The sketch is sure to be controversial, but it's almost begging the question: Why can't sketch comedy really, truly be about something important and still be funny? The answer, if Schumer has anything to do with it, is "Well, it can."

That take seems evidence from the rest of the episode, in which Schumer explores the completely nonsensical age bias that plagues women over 40 in Hollywood. It's dark — though not as dark as rape, to be fair — and a serious problem with the industry, but enlisting Julia Louis-Dreyfus, Tina Fey, and Patricia Arquette to help ramp up that discussion while chugging pints of ice cream, extolling the virtues of growing one's pubes out, and exchanging farts is pretty freaking brilliant. Normally, this issue just makes me angry and sad for ambitious women everywhere — should I just stamp an expiration date on my forehead right now? But seeing it through the lens of this sketch that essentially puts four badass women together and calls BS on the whole game is cathartic in a way I didn't think was possible.

Don't get me wrong. The series isn't without its usual fare — there's a so-so One Direction inner beauty sketch forthcoming and Schumer hasn't forgotten how much we love her jokes about drunk women cooking with mayo, Xanax, and old carrot sticks in their kitchen at 2 a.m. But the fact that Schumer has placed so much potentially controversial material in her debut episode says a lot about the tone and the mission she and the writers are looking take in Season 3. Schumer has become something of a feminist icon, and they are not just leaning into that, they are pushing the damn wall down with all the fervor of the Kool-aid man in a mid-'90s commercial.

And to me, that's the crux of IAS' new season and what makes this show not only continually wonderful, but truly important.