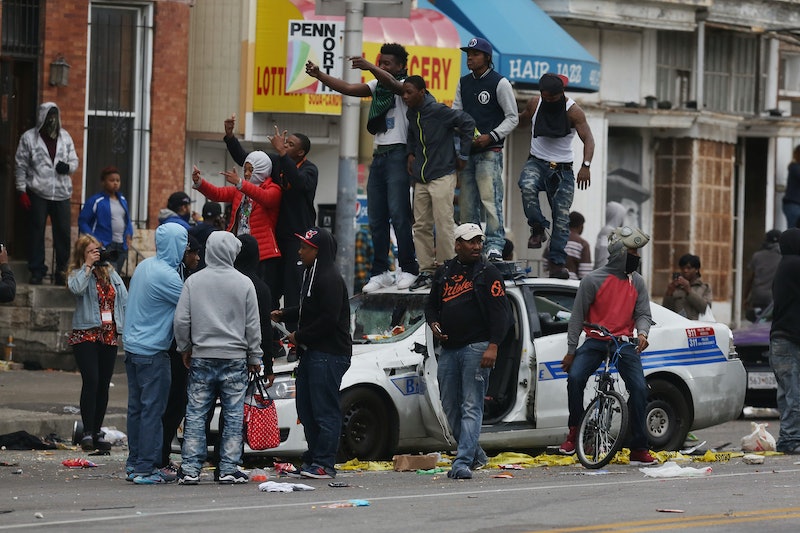 Freddie Gray's funeral was marred by violent protests as the heart of Maryland further descended into chaos. Businesses and government offices in Baltimore shut down Monday as the violence that began in the late afternoon continued into the night.

In an attempt to contain the increasingly dire situation on Monday, Gov. Larry Hogan declared a state of emergency and mobilized the National Guard as Baltimore called a curfew for all residents. At least 15 police officers have been injured, two of whom remain hospitalized, and riots and looting reportedly broke out in much of the city's west.

As violence escalated, Baltimore Orioles announced a postponement of their game with the Chicago White Sox and a number of the city's leading universities closed, including the Maryland Institute College of Art, the University of Maryland, Baltimore, and the University of Baltimore, according to The Baltimore Sun. Field trips to the city by Baltimore County and Anne Arundel public schools have also been canceled or postponed, as reported by the local newspaper.

Buildings normally open to the public have similarly shut their doors: all of the Enoch Pratt Free Library's branches, the Lillian Jones Recreation Center and the Robert C. Marshall Recreation Center, The Maryland Athletic Club and Charles Theater, which announced on Facebook that it was closed on Monday night, The Baltimore Sun reported.

A senior center under construction by a church erupted in fire as people reacted in disbelief. The severity of the bedlam in Baltimore led all of the city's public schools to close for Tuesday. Stores have similarly closed as the curfew goes into effect at 10 p.m., among them a handful of CVS branches and a considerable number of small businesses listed on The Baltimore Sun. Trinacria Italian Deli took to Facebook to tell customers that their store was "destroyed."

Monday's riots began near Mondawmin Mall hours after Gray was laid to rest at the New Shiloh Baptist Church. His death sparked a week of peaceful protests calling for justice for the slain 25-year-old that abruptly turned violent over the weekend. Mayor Stephanie Rawlings-Blake, struggling to contain rampage in her city, told CNN on Monday that the violence was "very disturbing":

Too many people have spent generations building up this city for it to be destroyed by thugs who, in a very senseless way, are trying to tear down what so many have fought for. ... It is so frustrating that people think that this makes sense — to destroy our community. People who live there that are already hurting are going to be the ones that pay.

Billy Murphy, an attorney for the Gray family, said that the family didn't approve of the violence:

I am sure that the family is concerned, and I am positive that they are against what is beginning to develop here in town. [The cops injured] don't deserve this any more than Freddie Gray deserved it.

More like this
The Lionesses Are Calling For Equal Access To Football In Schools
By Sophie McEvoy
'The Capture' Is Finally Back – & S2 Looks Tense AF
By Sophie McEvoy and El Hunt
25 Things I've Reduced My Life To, In Addition To WFH In My PJs
By Ginny Hogan
7 Things We Learned From Rebekah Vardy's First Post-WAGatha Christie Interview
By Sam Ramsden
Get Even More From Bustle — Sign Up For The Newsletter