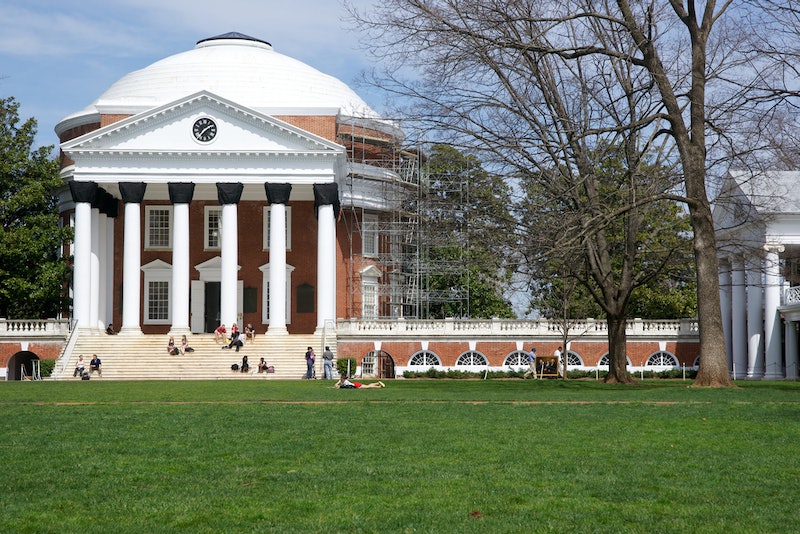 Rape and sexual assault on college campuses and other educational institutions has become such a topic du jour around sites like Jezebel and xoJane that it seems as if some people ignore it entirely. Not so long ago, I would have counted myself among that number. It happened, I knew, but surely not at my school – or if it did, it couldn’t occur frequently. Then I came to Valencia, and during some of the most open, frank conversations I’ve ever had, I heard stories from almost every girl I met. One got drunk at a party, went home with a boy but told him she didn’t want to have sex, and found him on top of her later. Another was raped at a frat and then blacklisted. The cases of assault and harassment seemed to be the rule rather than the exception. With those stories filling my ears and humming in my blood, I decided to tell my own.

Almost six months ago, when joining an organization at my university that I very much enjoyed participating in, I found myself in need of fulfilling one last requirement to join. As a prospective member, I had to get to know several long-term members in an informal setting. The day before the semester was over, I needed one more meeting. A man in the group had reached out to me previously, and since we shared interests in travel and foreign languages, I asked him if he wouldn’t mind chatting with me over coffee to nab that final requirement. As the day wore on, the situation began to change. First he pushed the meeting back to night. Then he said he’d pick me up. Then he said we could just go to his apartment. Then there was no one else there. It became clear to me that a casual conversation about all the places we’d traveled wasn’t what he had in mind. Despite my repeated excuses, he continued kissing me, pinning me to the couch, and touching me. It took me two hours to convince him that I wanted to go home. I walked, shaking, up the steps to my dorm room, papers in hand. In the ‘location’ space for the meeting slot on my sheet, he’d written that we’d talked in the library café.

It wasn’t rape, I kept telling myself over the following days. It wasn’t rape. I never said no, not exactly. The other half of my brain kept picking out the flaws in those words. He was twice my age, twice my size, and twice my strength. He held a position of power over me, both physically and metaphorically, because he knew I needed one last meeting before the next day. He probably thought that, as the only first-year female in my prospective group, I wouldn’t turn him down. And just because it wasn’t rape didn’t mean that it didn’t signify anything.

I eventually went to the president of the organization to tell her exactly what had gone down. Furious at what had happened to me, she wrote out a list of my resources. Let me take a moment to say that, during this step of the process, I met a group of dynamic, intelligent individuals who took the time to constantly make sure I knew all my options. I was fed waffles. I was treated at the Pigeon Hole. I was given legal advice and personal advice, all of which was sound. But the president told me that the only way to expel this member from the organization was to hold a hearing and pass a vote. Not only would this man have the chance to twist the scenario to his liking and reveal my name, I had no evidence. This was a classic example of a he-said-she-said case: no evidence on either side, just bitter feelings and a gnawing sense that this had been wrong.

I then considered reporting him to the university. In my research on that front, I found some truly disappointing statistics. In the past twelve years, UVA hasn’t expelled a single student for sexual assault. However, during the last academic term alone, it’s expelled six for violations of the Honor Code. For those of you who aren’t students here, UVA expels students who break the Honor Code, as per the single-sanction rule. The Honor Committee website defines an honor violation as follows: “a Significant Act of Lying, Cheating or Stealing, which Act is committed with Knowledge. Three criteria determine whether or not an Honor Offense has occurred:

Call me crazy, but sexual assault seems to be on par with, if not worse than, lying, cheating, or stealing. To put things in perspective, let’s apply the same parameters to what happened to me.

I try not to pretend to be anything other than what I am. I am only a writer. I am not a lawyer, nor am I an educator, nor am I any kind of authority on what kinds of laws govern sexual harassment/assault cases on university grounds. I was not raped, just put in a situation that made me queasy. And outside of the organization in which I am involved, I didn’t report this to anyone. In some ways, that makes me part of the problem, and I wish I had taken further action six months ago. But I know enough to say that all people – women and men both – who are enrolled at any educational institution deserve proper protection from that kind of situation. If it does happen (and it will – I’m not naïve enough to imply that it can be eradicated entirely, even by the best schools), they should feel safe in the knowledge that whatever happened to them will be treated with the same gravity as lying, cheating, or stealing. To any members of the UVA Sexual Misconduct Board who happen to read this post: you are on the right track, but you are not doing enough. When students who have been courageous enough to report their stories (Kathryn, Annie, Anonymous Wahoo) consistently come away saying that they feel blamed and that their perpetrators are able to get away with nothing more than a slap on the wrist, you may want to consider that the way that you’re evaluating cases could use some work.

I have come to love so many aspects of my university: lying on someone’s old quilt spread across the Lawn on a fall day, taking creative writing classes with the incredible English department, blissfully stuffing a Bodo’s bagel in my face. Others I have come to hate, and none more so than this one. The University of Virginia already has a centuries-old reputation for sweeping distasteful problems under the rug, such as misogyny and elitism. It is now also gaining a reputation as an institution that fails to protect its own students in the most basic of ways. Nearly ten years ago, Hook wrote a story called “How UVA Turns its Back on Rape.” I’m still not sure it’s accurate to say things are much different. Today, when debates over rape culture, allocation of blame, and nitpicking over sexual assault laws, semantics, and definitions run rife through the media, it is now more important than ever for UVA to tighten its standards. A true community of trust, after all, does everything it can to foster that trust in every aspect of student life.

An aside: thank you to all the students I’ve met who have shared their stories with me. You have all survived so much and are so incredibly strong. You are my role models.

Editor's note: Bustle reached out to the University of Virginia for comment on the concerns raised in this piece. UVa has not responded.