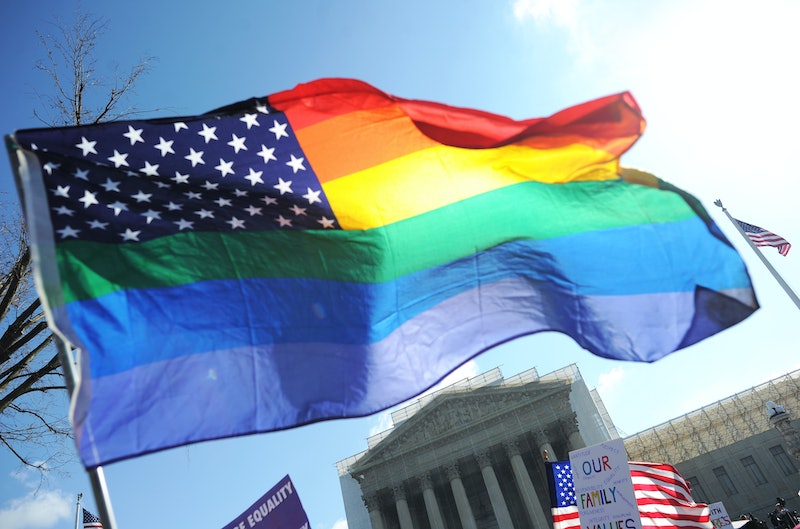 On April 28, oral arguments over the nationwide legalization of gay marriage were heard for two and a half hours by the U.S. Supreme Court in Obergefell v. Hodges. NPR notes that the case addressed two questions: "First, whether bans on gay marriage are constitutional; and second, if they are, whether those states with bans may refuse to recognize out-of-state gay marriages performed where they are legal." Now, we'll have to wait until June to find out if gay marriage will finally be legal across the nation.

For LGBT activists and allies, the Constitutional right for same-sex couples to marry has been a cornerstone of their fight for social justice. In the above NPR story, gay marriage advocate Mary Bonato argues in favor of its legalization: “‘This is not about self-government or persuading voters,’ argues Bonauto. ‘It's about the Constitution and whether, constitutionally, same-sex couples can be denied the right to marry that all other Americans enjoy.’"

Thankfully, Mary Bonato is far from the only public figure to speak out in favor of gay marriage. For decades, celebrities, politicians, and writers have lent their fame and interview time to the topic of gay marriage. As it turns out, some of these well-known folks have a lot of interesting things to say. If you’re curious about what some of your favorite writers, actors and entertainers think about gay marriage, below are some of their thoughts:

1. Author Cheryl Strayed thinks the end of homophobia is nigh

"I think that we’re going to age out of homophobia... in my lifetime I’ve seen real change that has happened. I’m so absolutely furious about these amendments that say marriage is between one man and one woman — that stuff is just horrendous and retrograde, but it’s going to die out. In the next generation, we’re not going to have to mount these battles. It’ll be recognized as a basic right that two people who love each other should be able to get married, regardless of their gender or sexuality or whatever. In Minnesota, my home state, they’re trying to go out of their way to make a constitutional amendment that makes gay marriage illegal, and I think that the reason that exists is that there’s so much feeling the other way — they’re threatened and they’re going to be eradicated. We have them cornered! That’s why they’re fighting so hard, because there has been a perspective shift." - PQ Monthly (November 2012)

"We need everyone on our side... we just need people that believe in equality and believe in fairness and love. So if we have people that will join us and give us that, which is only fair to have the same rights that everybody else has, then it's a wonderful world." - US Weekly (January 2015)

4. George Takei will flip the bird if you give him flack over gay marriage

"You know, 60 years ago it wasn't considered a real marriage if a white person wanted to marry an Asian American like me. And now look, I married a white dude. Times change. Attitudes change. And for the better... It is all about love, and we, as a same-sex couple, just want the same right to have our love recognized." - The Huffington Post (March 2015)

5. Lady Gaga has determined it will be so

"Gay marriage is going to happen. It must." - BrainyQuote

“Don't hide behind the Constitution or the Bible. If you're against gay marriage, just be honest, put a scarlet 'H' on your shirt, and say, 'I am a homophobe!'” - Talk is Cheap: Volume 1

9. Writer Elizabeth Gilbert believes this could very well save the institution of marriage

"Still it is true that many same-sex couples want nothing more than to join society as fully integrated socially responsible family-centered taxpaying Little League-coaching nation-serving respectably married citizens. So why not welcome them in? Why not recruit them by the vanload to sweep in on heroic wings and save the flagging and battered old institution of matrimony from a bunch of apathetic ne'er-do-well heterosexual deadbeats like me?” - Committed: A Skeptic Makes Peace With Marriage