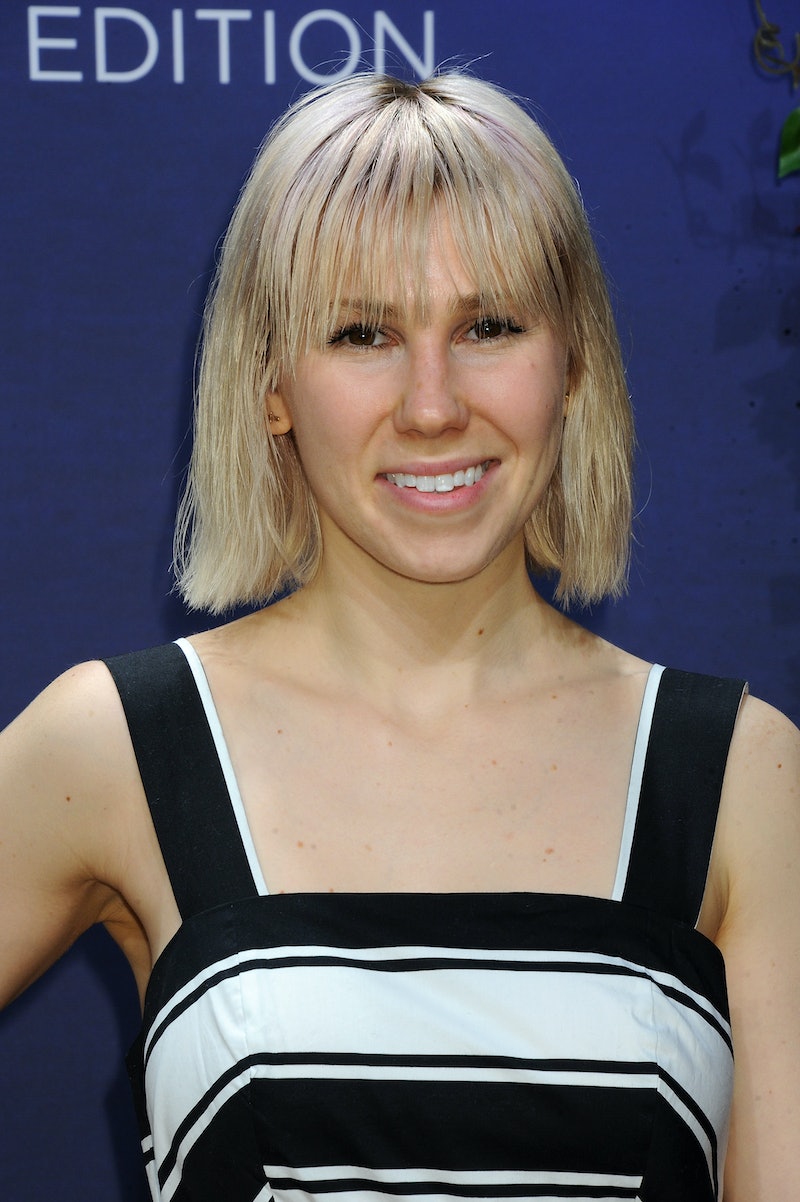 When we last left Shoshanna in Girls Season 4, she was saying goodbye to her life in New York and konnichiwa to a new job in Japan. For the first time in the show's five seasons, Shosh was embarking on her own in a new country, deciding to "lean the f—k in" and take a leap of faith instead of staying with her new beau, Scott, stateside. But will she stick to her guns in Season 5? When I caught up with star Zosia Mamet at the Milly for Kohl's launch in NYC on Wednesday, she revealed that things get "cray" this year and also dished about how Shosh could be running for president in the Girls movie and her big dreams of guest-starring on Nashville.

"Something pretty cray happens. Stuff’s getting pretty crazy," Mamet immediately says about Season 5. "I can’t give you any specifics, but she’s sort of continuing down the path of trying to figure out what it means to be an adult and have an adult life, and I think she’s still sort of sifting through what she actually wants. I think for the first two or three seasons, you saw her going by what she sort of thought she should want, and I think part of growing up, you start to think, ‘What do I want? What do I actually want out of this life?’"

Even though it was a drastic decision to pick up and move to Japan, Mamet says we shouldn't be too worried about her settling in. "I think her new job is like her dream job," she says with a grin. Unfortunately, she couldn't give any answers about Shoshanna's future with Scott (Jason Ritter), but she gushed about the actor who portrays him. "I cannot say anything but kind, incredible things about Jason. He is the best human being," she reveals. "He’s also f—king hilarious. He had me dying. I was dying." (In case you were wondering, yes — Mamet is as bubbly and fun as Shosh in real life.)

Jumping ahead, I also asked Mamet what she thought Shosh would be doing in Lena Dunham's imagined Girls movie in which the gals are all grown up and in their 40s, and it sounds like she'll be ruling the world.

"Something fabulous, hopefully! I feel like Shoshanna’s going to run a Fortune 500 company and maybe invent something, have five children, and start a farm," she suggests. "I think when she sets her mind to things, she’s incredibly capable, and she could maybe run the world. Maybe she’ll run for president! Shoshanna for president? I don’t know!"

As for now, Shosh is figuring out her new life and also discovering her feminist identity. With her "lean in" moment at the end of last season, Mamet says she thinks "she’s growing into figuring out her identity when it comes to that [feminism] — she's still figuring that all out.

One thing Mamet is absolutely sure about is what she wants to do outside of her own show. Apparently she's been rallying to get on Nashville, ready to rock big hair and cowboy boots alongside Connie Britton and Hayden Panettiere.

"I am literally embarrassing myself with the amount that I’ve asked to be on Nashville, but I want to be on Nashville so badly," she says excitedly. "I just secretly want to be a country star." She will play "anything" they ask, and since has a band of her own named Chacha, she's totally ready to sing. Or, as she puts it, "Yeah, I'll sing for Nashville. I’ll sing for my supper!" Juliette vs. Shoshanna in Nashville Season 4, please.