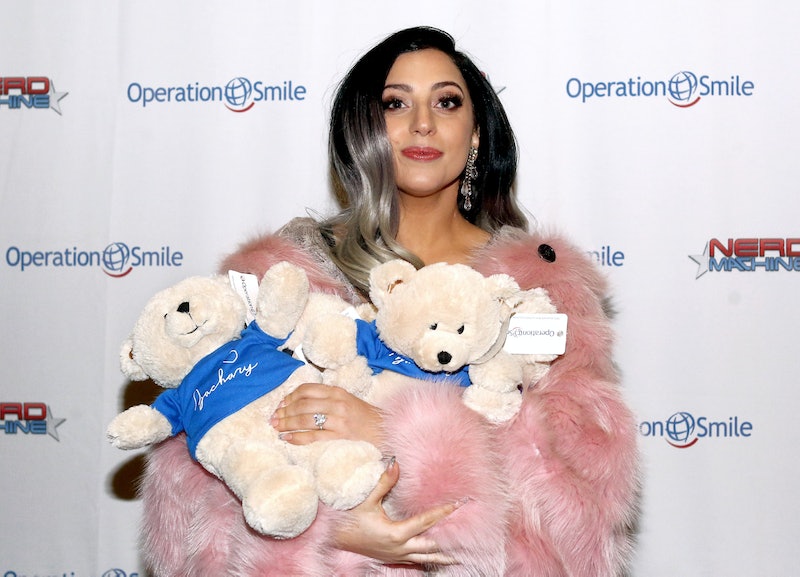 When it comes to accessories, Lady Gaga knows what she is doing and she isn't afraid to take calculated fashion risks, like going Old Hollywood glam. Mother Monster is always in favor of things like of neckbreaking heels, bows made out of hair, or telephone hats, among others. But lately, it seems like Lady Gaga is all about pets as fashion, but beyond pets-as-accessories that you carry around a la Paris Hilton in the early '00s.

Sure, her adorbs black pup Asia has been her arm candy for the past year or so. But she just added a new pooch, named Koji, to the her brood and Gaga has taken to posing with Koji, who is a warm caramel shade, as opposed to Asia's glossy black fur, while topless.

He sort of acted as a de facto bra in Ma Monster's lates Instagram posts. And while she looks amaze, it's really Koji who captures my attention because he is crazy cute.

And that's just the dogs. Gaga has also been posing in her new chicken coop.

Gaga has been the target of PETA's ire many times in her career, due to her stance on wearing fur and dressing up her dog. Having a chicken coop via her fiancé Taylor Kinney and these sorts of poses won't do anything to squash PETAgate.

But she clearly has love for her pets and keeps them by her side, no matter what else is going on in her crazy life. The Kinney brood of fur babies factors into her fashion.

Gaga posed in the chicken coop in a leather-look, colorblocked outfit with an outrageous hat.

That's some hat and some photo shoot location. I've seen stranger places for high fashion posing, but this feels very impromptu with Gaga. And the arm panels feel like some sort of reverse wings.

Gaga was checking on her chicks in a pair of creepers and the overall presentation here is sort of alien-like and ridiculous, in a fabulous way.

Who isn't crushing on Koji?

Gaga has welcomed animals in her life and she does so in a typically Gaga way—incorporating them into her look while loving them.

And here's Asia, in case you forgot how cute she is.