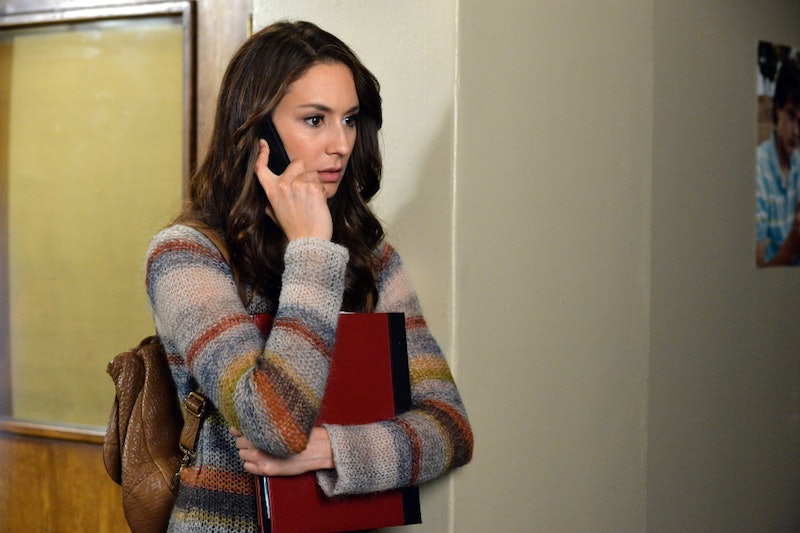 The Season 5 finale of Pretty Little Liars let us all in on the secret that Big A is Charles DiLaurentis, brother of Jason (possibly his twin, though that’s unconfirmed) and Alison. But what many forgot was that if Charles is blood to Jason and Ali, then Charles could also be Spencer’s brother if he's the product of another Mrs. DiLaurentis and Mr. Hastings tryst. I mean, I don’t even think that Spencer realized it at first. You see, good old Mr. Hastings had an affair with neighbor Mrs. DiLaurentis, resulting in bouncing baby boy Jason (he also fathered Melissa with his own wife that same year, which, gross). That makes Jason related to Melissa and Spencer, and if Charles is also Mr. Hastings' son, that would make Spencer and Melissa half-siblings to both DiLaurentis boys. Got all that? This isn’t a family tree — it’s a family shrub. A rolling familial tumbleweed.

Like I mentioned before, Spencer was too busy trapped in a weird dollhouse in an orange jumpsuit to really understand the possible (and likely) ramifications of what she was seeing: Though she doesn’t yet realize that she could be a sibling to Big A — the person who has been torturing her and her friends for five seasons, by the way — the connection is pretty obvious to me. Spencer and Charles (from what we know of him, at least) do share a lot of similar characteristics. Now, I’m not saying that Spencer is evil — people can use their talents for good, and people can use their talents for evil — but blood ties run strong, and Spencer and Charles have more in common than you’d think.

Spencer didn’t get to be the smartest, most well-rounded girl in school without a serious datebook and the self-restraint to go with it. It takes a lot of time to schedule all of those extracurricular activities and internships! Charles also shares this trait, as all of the shenanigans (OK, more like stalking and terrorizing) he’s done over the past five seasons have been very calculated. Charles is working on his five-year plan: That’s something that takes plenty of forethought and more than one murderous bulletin board.

Though Spencer and Mona (and Andrew, too) have been duking it out to see who gets to be the school valedictorian (Andrew has murder in his eyes, so my money is on him), Charles has shown that he’s the smartest of them all. Drilling into teeth? Hacking into phones? Erasing whole hard drives remotely and with the click of a button? Tim Cook had better watch his job at Apple, because Charles DiLaurentis could certainly tell him a thing or two about computer systems.

They Hold A Grudge

Spencer doesn’t let go of transgressions lightly. I mean, there was a reason why everyone was convinced that she chipped Ali/ Bethany Young in the back of the head with a field hockey stick. No one would have thought that Spencer had the propensity for violence if she… didn’t have the propensity for violence. Similarly, Charles has been plotting the demise of his little sister and her friends, for, oh, about five seasons now (at least), so I’d say that’s the pinnacle of grudge holding.

Charles was either locked up in Radley (my theory) or sent to live like Nell alone in the woods, so it’s safe to say that he doesn’t have many friends. If he did, he would probably have them locked up in the dollhouse with the liars. He’s just a man alone with his mannequins, you know? Spencer only hangs out with four people — Aria, Hanna, Emily, and Toby — so her dance card is hardly ever full. Unless, of course, you count that weird British guy, which I do not.

Spencer and Charles’ intrinsic similarities and very different outcomes make an interesting point about nature versus nurture. Will Spencer realize that the most evil person they’ve ever met is her flesh and blood? Take it from me, Spencer — go to college, and go to the most far-away school you can.