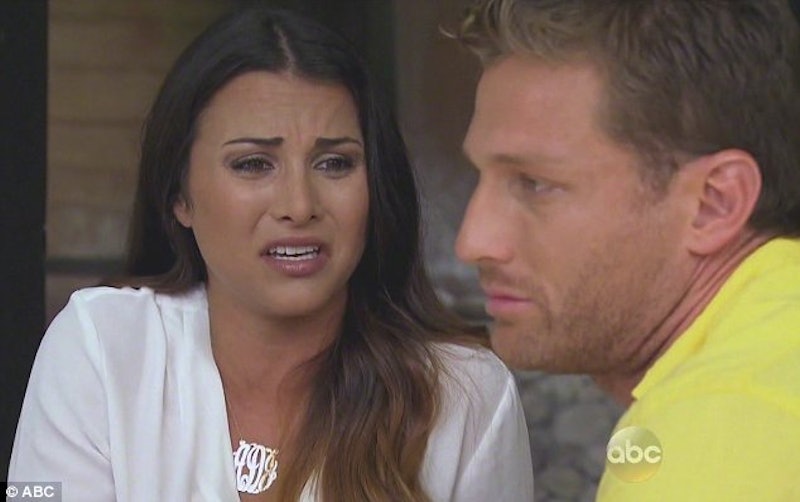 Although The Bachelor has been on for over 13 years, it's only in the last few years that it's really picked up steam thanks to the Internet and social media. Now, not only do all of the contestants live tweet the drama, but fans have made The Bachelor memes — and they're straight-up hilarious. Starting around Season 16 with Ben Flajnik, and really picking up steam thanks to "Ees OK" Juan Pablo Galavis during Season 18, the funny pictures make watching the show that much more entertaining.

The best thing about the memes is that they can include everyone from host Chris Harrison, to the Bachelor, to the contestants themselves. But don't worry, it's all in good fun. Fans of The Bachelor know that part of the whole experience is mocking it. After all, one man and 25 girls vying for love over a matter of weeks? It's a little silly — but I can't help but love to watch.

Unfortunately, we still have a ways to wait until the next season. So, for now fans, can tide themselves over with these hilarious Bachelor memes featuring the best moments of the last few seasons.

When The Bachelor Episode Isn't As Dramatic As Promised

Andi's face is everything here.

I love a good Bachelor doppelgänger.

Not that anyone was complaining.

Remember when this girl rolled down a bunch of stairs to get Sean Lowe's attention? Cray.

The Bachelor Affects My Productivity

Chris Harrison is just so good at his hype job.

Juan Pablo Doesn't Care About Anything

He was Juan lame boyfriend.

The Best Kind Of Product Placement

In the words of Andi Dorfman, "I want to die if I have to hear 'it's OK' again."

No Wonder He Loves Corn So Much

The strongest bond is between man and his corn.

Mean Girls plus The Bachelor is the stuff of dreams.

This is a taste of what life would have been like if Chris had picked Becca.

Whitney Has Big Shoes To Fill

Chris Soules sure loves his corn.

No One Likes Arlington

Neil Lane is not about this life!

Combining a Kim K. meme with a Bachelor meme is genius.

Trouble In The Badlands

No wonder he could hardly string a sentence together!

Chris Soules was quite the kisser on his season.

The Bachelor contestants will put up with a lot for a shot at that rose.

I feel your pain, girl.

Nothing comes between me and The Bachelor.