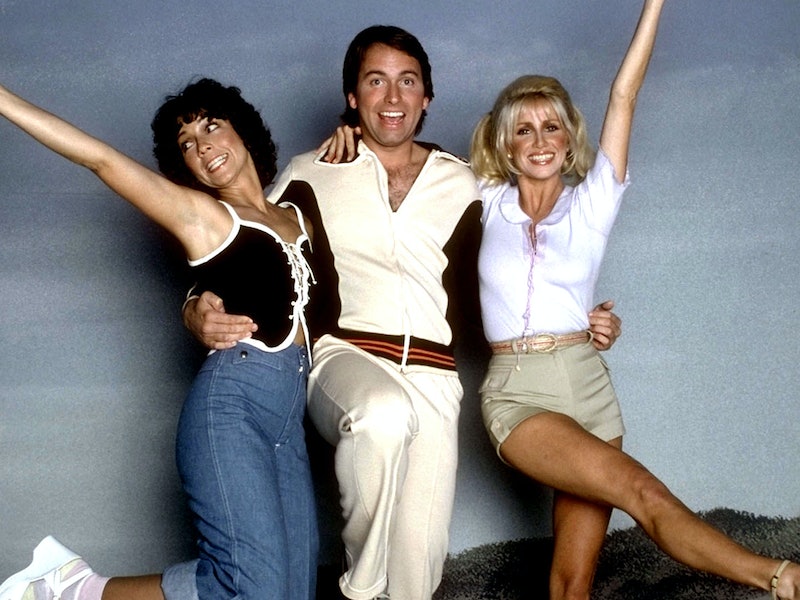 Listen, we've got a huge crush on Jason Ritter. This stems all the way back to his Joan of Arcadia days, and was only exacerbated when he romanced Lauren Graham in Parenthood. He's pretty much the embodiment of that hot English teacher we all had a crush on in high school, and it kind of makes us completely on board with that thing Suzanne Somers just said about a Three's Company spinoff starring Ritter.

Now, don't get up in arms already about reboots and unoriginal ideas and yada yada — this ain't Charmed , and this also isn't actually happening at all yet. It's basically just something Somers said in an interview with Closer Weekly, but due to our Jason Ritter crush and the hours we spent as kids watching Three's Company reruns on TV Land, our nostalgia and our unfettered love of boyish charm already has us kind of approving of this.

So what did Somers say, exactly?

I said to my husband the other day, ‘You know what would make a great sitcom? If Chrissy Snow’s son was Jason Ritter!' It would mean that ultimately, Jack [John Ritter's character] and Chrissy got married and they had Jason. It is the first acting idea I’ve had that has made my heart flutter.

Usually we'd be hugely skeptical of a spin-off like this, but what Somers suggests is rather cute. Whether Ritter wants to play the son of his tragically late father in a spinoff of the sitcom that made him a household name is completely up to Ritter himself — he may want to continue branching out on his own. His most recent gig is Us & Them, the American import of the British sitcom Gavin & Stacey, in which he romances Alexis Bledel (formerly Rory Gilmore). Because apparently his TV-type is former Gilmore Girls? Can't say we blame him.

Still, this is an idea we'd be interested in seeing, even if we highly doubt it will ever come to fruition. And even if we always kinda shipped Jack with Janet a little more than with Chrissy.

More like this
Melanie Lynskey Met Her Husband Jason Ritter While Filming 'The Big Ask'
By Alyssa Lapid
These Brooke Davis Quotes From 'One Tree Hill' Will Never Get Old
By Sabienna Bowman and Jack Irvin
The Banned 'Friends' Ad Shows Monica As You’ve Never Seen Her Before
By Sam Ramsden
Ashton Kutcher Wants Danny Masterson “To Be Found Innocent” In Rape Retrial
By Jake Viswanath
Get Even More From Bustle — Sign Up For The Newsletter
From hair trends to relationship advice, our daily newsletter has everything you need to sound like a person who’s on TikTok, even if you aren’t.