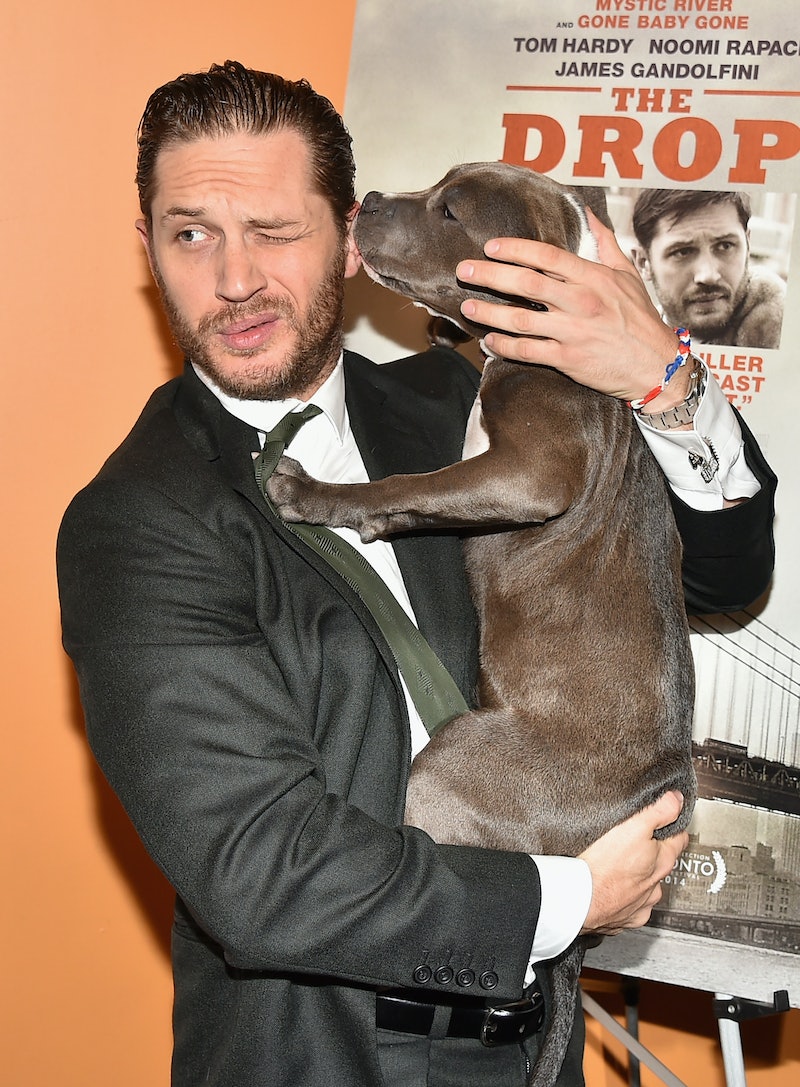 I'm going to try to get through writing this post without passing out, drowning my keyboard in drool, or hyperventilating. Because when Tom Hardy and dogs are involved, it's easier written than done. The 37-year-old actor stars in Mad Max: Fury Road, the latest iteration in George Miller's masterful series, and when he's not going insane on the big screen opposite Charlize Theron and Nicholas Hoult, he's supporting an awesome cause: animal adoption. Tom Hardy teamed up with PETA to bring you the most swoon-worthy and adorable campaign fathomable.

The campaign features the Mad Max star getting a big 'ol kiss from his pooch Woodstock. According to E!, the "duo first crossed paths back in 2011, when Tom was filming Lawlessin Atlanta and spotted the homeless pup running loose on the highway. The British hunk sprang into action, caught the canine, gave him a name and brought him home to London."

And this isn't Hardy's first adopted pup. When he was filming The Drop in Brooklyn, Hardy rescued another dog, and hopes others will follow in his footsteps. Last year, Vulture published an article entitled: "Tom Hardy Is a Huge Fan of Dogs and Proves It 62 Times in This Interview." That's a lot of puppy love.

Here are 14 times that prove Tom Hardy is man's best friend, because a picture is worth a thousand puppies.

When He Campaigned With PETA For Animal Adoption

When He Brought A Dog To A Film Premiere

When He Spooned With This Pooch

When He Had A Good Cry With His Puppy

When He Was Shirtless With A Dog

When He Giggled & Kissed A Dog

When A Dog Photobombed Him Perfectly

When He Hid A Puppy In His Jacket

When He Proved Your Relationship Goals With This Snuggle Sesh

When His Selfie Game Was Strong

When We Wished We Were This Puppy

When He Filmed Scenes With A Puppy

When He Begged A Puppy To Kiss Him