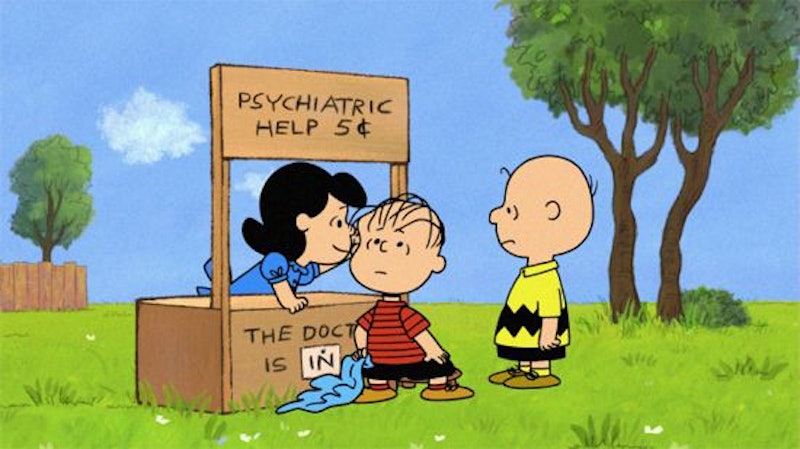 Despite the fact that we're well into our second century of psychology, there are still a lot of misconceptions out there about how talk therapy works, why it works, and whether "just talking" actually helps at all. For many of us, traditional talk therapy methods — most commonly psychodynamic therapy or cognitive behavioral therapy — have been a literal lifesaver, helping us claw our way out of depression, anxiety, or other psychological problems that made life feel impossible to handle. Which is why it can be so frustrating to hear people discuss talk therapy as if it were just a self-indulgent excuse to talk about yourself (my mother is a proponent of this theory; coincidentally, I find myself talking about her a lot in therapy).

Others are confused about why talk therapy still exists when we now have access to a wide variety of safe and effective psychological medications — after all, who wouldn't prefer to take a pill and feel better, rather than spend hundreds of hours (and thousands of dollars) talking to a therapist about that time you split your pants at soccer camp? This line of thinking includes not only a misconception of the nature of talk therapy, but a misconception about the nature of meds. Though one out of five Americans takes psychological medication, they don't instantly resolve our psychological problems, which can often be rooted as much in life experiences as they are in brain chemistry.

Which is why talk therapy remains so important. In an age when many psychiatrists are cutting down on their talk therapy sessions and many insurance companies are offering coverage that privileges psychiatry over therapy, talk therapy remains as important as it ever was. So whether you're thinking of going into therapy yourself, supporting a friend who's considering it, or just want to understand why some of your friends spend so much time and money talking with a stranger about their parents, here are four documented ways that talk therapy can still improve people's lives.

I mean, they haven't invented a pill that helps you vent about your mother yet, have they?

1. Therapy Can Be More Effective Than Medication

When Prozac was popularized in the '90s, many people thought we'd found a "magic bullet" to fix depression and other mental health issues — but the reality has been more complex. Though meds have changed many lives immensely for the better, not all people respond in the same way to psychological medications, and some people don't respond to psychological medications at all. Recent research has found that for those folks, talk therapy can make more of an impact than any pill.

A 2014 study in medical journal The Lancet examined data from 101 studies, covering over 13,000 patients, and found that talk therapy, particularly cognitive behavioral therapy, was an overall more effective treatment for severe and long-term social anxiety disorder than medication or a placebo.

A similar 2012 UK study focusing on people with depression found that the study's 470 subjects — all of whom had not responded to a six week course of antidepressants alone — were three times more likely to feel that their symptoms lessened if they underwent traditional talk therapy in addition to taking antidepressants, rather than just taking meds.

2. Therapy Can Make Your Body Healthier

You know that your brain is part of your body, but sometimes it can be hard to see the link. That big globby thing, sitting all alone up there under your hair and earbuds — could it really be causing that weird ache in your back?

Believe it: a 2010 study in The Lancet found that a course of cognitive behavioral therapy helped a group of subjects who experienced chronic lower back pain feel less nervous about their back pain, less tense about injuring themselves further, and ultimately actually lowered the amount of pain that they experienced each day.

3. Therapy Can Help You Sleep Better

If you're reading this while drinking your fourth cup of coffee because you got about five hours of restless sleep (and one really weird dream about Tom Hiddleston) last night, you're not alone — one in five American struggles with insomnia.

Studies have shown that even a short course of CBT can improve insomnia. In fact, a 2013 study published in the Medical Journal of Australia advised that CBT should be the primary therapy for those suffering from long-term insomnia, and that sleep medications like Ambien be used in a more auxiliary capacity.

4. Patients Continue To Improve Even After Therapy Ends

The days when going into therapy meant committing to a lifetime of sitting on a couch, discussing your father with a therapist who just nodded and took notes, are over. Today, most people attend talk therapy to work on specific problems, and stop attending talk therapy after they feel like they have a handle on those issues. But the benefits of talk therapy last even after you've paged through the weird magazines in your therapist's waiting room for the last time.

Medication can be a great help for many people suffering from mental health issues — but if the circumstances causing the problem are not changed, the patient may end up back at square one once they stop taking their meds. Talk therapy gives you a different arsenal to work with.

As psychologist and author Jonathan Shedler writes in Scientific American, "research shows that people who receive psychodynamic therapy actually continue to improve after therapy ends, presumably because the understanding they gain is global, not targeted to encapsulated, one-time problems."

So don't think of talk therapy as navel-gazing, or a waste of time — talk therapy is more like taking a class in yourself and how you operate. And I mean, you took that knitting class last winter and then only knitted for six weeks. You're going to be you forever. Is it really such a waste of time to spend a few hours sitting down and figuring you out?

More like this
This Psychological Effect Might Be Keeping You From Hitting Your Goals
By Lexi Inks
The 5 Best SLS-Free Toothpastes, According To Dentists
By Amy Biggart and Danielle Calma
Angel Number 333 Is All About Self-Love & Alignment
By Brittany Beringer and Kristine Fellizar
26 Ghost Story Podcasts To Get You Ready For Halloween
By Jessica Booth, Mia Mercado, JR Thorpe and Emma Carey
Get Even More From Bustle — Sign Up For The Newsletter