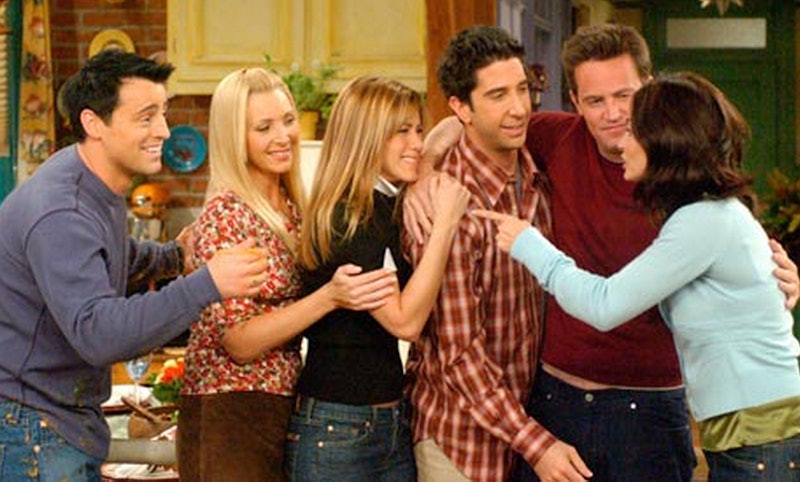 Like the rising of the tide or the setting of sun, rumors of a Friends reunion periodically appear like clockwork and break the internet every time. Despite all of the members of the Friends cast regularly denying reunion rumors, the Internet can't let it go. In fact, we refuse. We've seen some of our favorite shows return long after we thought they were dead (i.e. Dallas, Arrested Development, The Comeback), and we demand the same of Friends! Sure, the writers and creators have openly stated that the show was about a very specific time in their character's lives and that returning to that world wouldn't make any earthly sense, but dammit, I want to see the misguided attempt at doing so!

Really, though, what could a Friends reunion even look like? Is there a way to do it right, or will seeing Joey with three kids and Rachel experience early-onset menopause somehow tarnish the legacy of the show? It's certainly happened before: The Sex and the City movies aren't exactly critical darlings, the fourth season of Arrested Development had its problems, and now the Twin Peaks revival seems vulnerable to a similar fate with David Lynch's exit. A bad Friends reunion would be an huge, public failure!

With those stakes in mind, I present a wish list of ideas for the imaginary Friends reunion that we fans can't stop thinking about. IF it ever happens, here's what I want to see:

Use The Flashback Premise

I agree with the show's creators that seeing the Friends characters in the winter of their lives would be a really bad idea. We don't have to stay there, though! Set up where they are now, but then use the time-honored Friends trope of flashbacks! Show them moving through the trends of the past 11 years in the time before they all have kids, divorces, and second mortgages.

Phoebe was one of the best characters, and Lisa Kudrow has the Emmy to prove it. Out of all the characters, I think it's a safe assumption that she probably will have had the most interesting adventures in her late 30's and early 40's. I hate to say it, but you know who probably didn't have the most interesting lives after 35? Ross and Rachel. Based on the show's finale, they presumably lived happily ever after — and even if they didn't I don't think anyone is up for another will-they-or-won't-they where they're concerned.

Update The Comedic Aspect Of The Show

The tone of television comedy is very different now. While no comedy writer is above a good pun, you have to earn them. Like Sex and the City, Friends liked to use a lot of puns, and that's just not how television comedy functions now — just look at a show like Modern Family, for instance. Toning down the puns to keep the show modern would not only give Friends a fresh spin — thus further validating the reunion — but it would certainly ensure the show doesn't grow old.

Don't Focus On The Kids

It seems highly likely that the characters would have had quite a few more babies 11 years down the road. Already, there were four kids in the mix by the end of the series, but at the time they were mostly too young to really be featured in any way. Ross's son got screen time every now and then, but the show's focus was never on the children. The hypothetical reunion should continue in that vein, even if the characters have a lot of kids. We were all invested in Friends for the friends, not their kids.

Steer Clear of the Usual Character Traps, or Make New Ones

Monica likes things clean! Joey's not the smartest! Ross is such a nerd! While the dynamics on the original series could be fun to watch, the general criticism of later seasons is that characters became cartoonish versions of their previous selves. Monica became sociopathic in her obsessive compulsion, Rachel turned a bit self-obsessed, and Joey developed the IQ level of a broken garbage disposal. If Friends comes back, it would be nice to see them written a little more realistically. If not, then at least change up the joke.

The friends of Friends live in the most diverse city in the world — the cast should absolutely reflect that.

The original song is brain-meltingly catchy, but, if you're making a reboot, everything needs to be rebooted — even the theme song. And, you know, if Arcade Fire or Kanye West wanted to take a stab at it, I wouldn't say no.