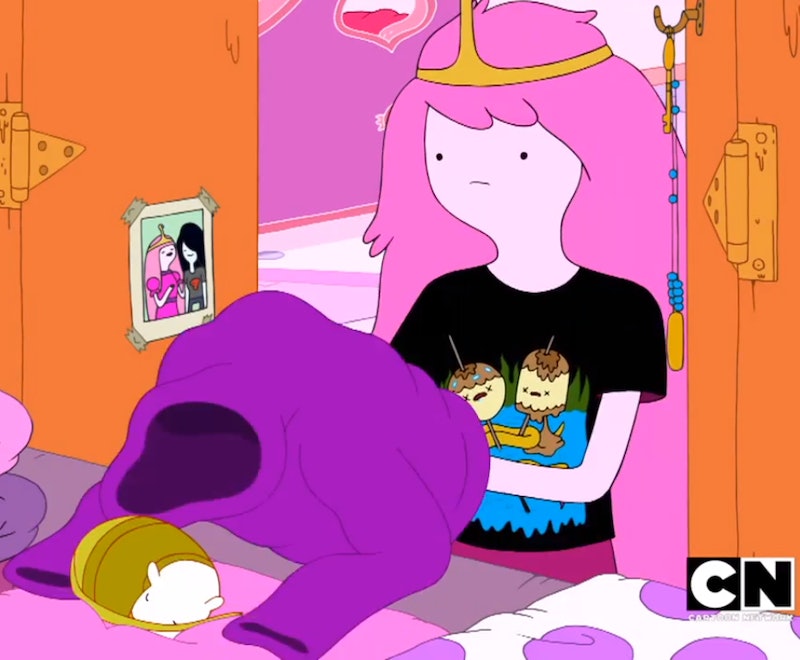 Have you ever imagined Princess Bubblegum in designer clothes? Or better yet, all the Adventure Time girls in designer clothing? Back in 2013, illustrator Jerome LaMaar drew a selection of our beloved female cartoon characters in clothes straight off the runway, including the infamous PB. His illustrations included: Daria wearing Marni, Jem in Balenciaga and all of the Sailor Scouts in looks cherry-picked from the catwalk.

Obviously the fashion world went wild for LaMaar's drawings because they combined two of many women's favorite things: Fashion and popular cartoon characters. It was LaMaar's carefully selected choice of our most beloved animated ladies that really hit the nail on the head, though. Fashion and lifestyle blogger Susie Bubble described her feelings towards his illustrations, "I've now been giddily tempted into shopping for new collections whilst simultaneously consuming marathons of both Sailor Moon and Daria — a dangerous combination of procrastination factors."

But what now? Two years later and with a whole host of new, female Adventure Time characters and an array of different fashion and designers to swoon over, I wanted, nay, needed more. So I paired the major Adventure Time chicks with outfits I imagined they would love to wear from the Spring/Summer 2015 runways to satisfy my craving for awesome animated gals paired with high end designer clobber.

Marceline loves stripes and is often seen in a stripy jumper. She also tends to go for dark-colored, grunge tones and her signature pieces would include ripped jeans. Occasionally this vampire queen will be seen in something a bit more feminine e.g. a dress or a sun hat. With its daring length, grunge color palette, and stripes, this Sonia Rykiel dress would be perfect for Marcy. Plus with the stripes being orange (and not quite red) she wouldn't be tempted to suck the color out of it. Score! Plus is that a cape I see? Or a furry jacket worn as a cape? Whichever it happens to be, it is nostalgic of the time that she and Finn ran with a pack of wolves. Maybe she skinned one afterwards — I wouldn't put it past her!

Princess Bubblegum is the ruler of the Candy Kingdom and although she dresses like a girly girl, she sure knows how to vanquish bad guys! Peebles is almost always seen in pink (often head-to-toe) and/or a traditionally feminine outfit. Thus this beautiful Ralph & Russo dress would be perfect for her. Its cotton candy pink shade would be right up her street and it looks fancy enough to wear to attend all manner of royal outings; perhaps even a Mallow Tea Ceremony. Plus, if needed, she could kick some serious butt if the opportunity arose as the short skirt would allow her to move around freely.

I would love to see Flame Princess wearing this outfit. It is hot off the spring/summer 2015 runway of designer Karin Mellqvist at the Swedish School of Textiles show. The skirt literally looks like fire and the top gives a nod to her armor in her more recent appearances. The sleeves are superbly billowy and elegant yet the black heels paired with white ankle socks hints at Flame Princess' youth and vulnerability.

Lumpy Space Princess is the coolest, lumpiest princess in all of Ooo. LSP is often seen in her friend Melissa's car driving around Lumpy Space or entering talent contests and showcasing her awesome moves. This divine Ralph & Russo lilac dress is totally LSP. With its purple shade and fabulous, layered look it is perfect for our favorite limelight-hogger. She's sure to get lots of complements in this stunning gown, which she will of course, revel in. Although if you see her, please don't mention Brad...

This Valentino gown is a magical match for Lady Rainicorn. Not only has it got rainbow-esque patterns all over it, but it is sparkly and glittery; it is everything a rainicorn's outfit should be. Being the mother of Jake's numerous foals/pups and perhaps not having as much spare time as she once did, this dress would most likely be worn to special occasions such as birthday parties or date nights with Jake. Plus, she'd look awesome whilst giving Princess Bubblegum a royal escort (as her steed) and the two would look gorgeous wearing their designer frocks together. Although she best not phase through any walls while wearing this lovely Valentino number, as the dress may get left behind her!

So now you have more dreamy Adventure Time fashion pairings to keep you going a bit longer! Maybe one day the show will feature a fashion show? We can but dream...