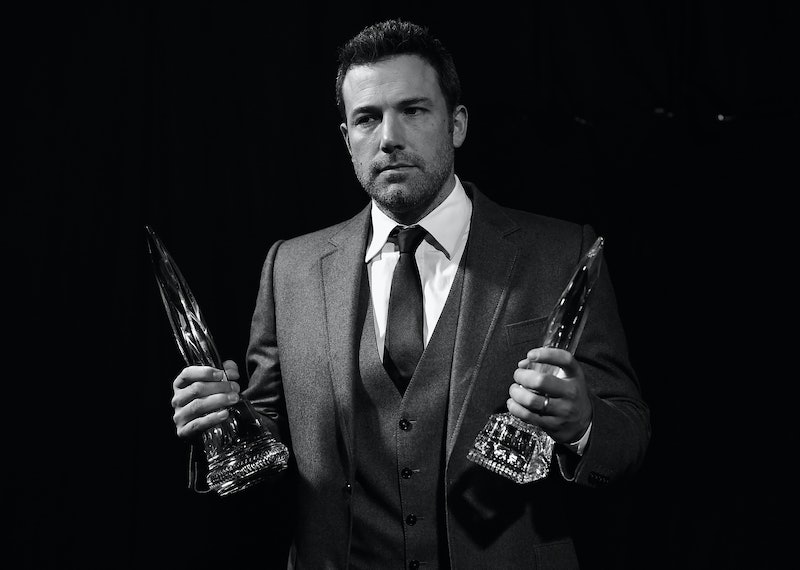 I certainly hope that the lingering doubters come around to accepting Ben Affleck as their personal Batman really soon, because Batman v. Superman: Dawn of Justice won't be the last time we see Affleck don the infamous cowl. The controversy surrounding the decision to cast Affleck as Batman continues to rage, despite the actor proving in several photos and one leaked trailer that he's quite cut out for the job, and now it appears that we'll be seeing even more of him. Maybe. On Tuesday, Affleck was spotted on the Suicide Squad set, leading some to believe we might be seeing the Batfleck in the film when it arrives to theaters on August 5, 2016. The question I have is, well, why?

There has been no official explanation for why Affleck was on the set, and there has been no confirmation that he's in the movie. However, it would make sense, wouldn't it? After all, both Harley Quinn and the Joker are in the film — the latter being Batman's most famous foe and the former being the one who came closer to killing Batman than the Joker ever did, according to Batman himself. The Suicide Squad movie is going to have to devote some time to explaining how this band of criminals was brought together under Amanda Waller's iron fist and, let's be real, it's probably Batman's fault.

The Suicide Squad was established as a means of giving known criminals a way to escape prison — or, rather, as a means of handling missions that were too dangerous to risk good agents over by sending criminals instead. After all, who cares if they return alive? And who keeps dumping criminals in the prisons, and in Arkham Asylum, in Gotham until they inevitably get out to kill more people? Yeah, that's right, Batman. Affleck's role in the film probably won't be very large, but then I could be wrong about that. After all, the Joker isn't a member of the Suicide Squad in any of its incarnations and yet a lot is being made of the fact that Leto will be playing the clown king of crime in the movie.

Perhaps Affleck is there to help deal with the threat of whatever the Joker is up to, which is the same threat that the Suicide Squad is there to deal with. Perhaps he's just there to dump the initial criminals in jail, where they'll be approached with the offer to join the Squad. Perhaps he'll show up at the end to round them up and throw them back in jail. Whatever option they choose, it's unlikely that Batfleck will be making a huge appearance in the film unless more photos of him on set come out. All of Batman's scenes couldn't possibly be shot in one day.