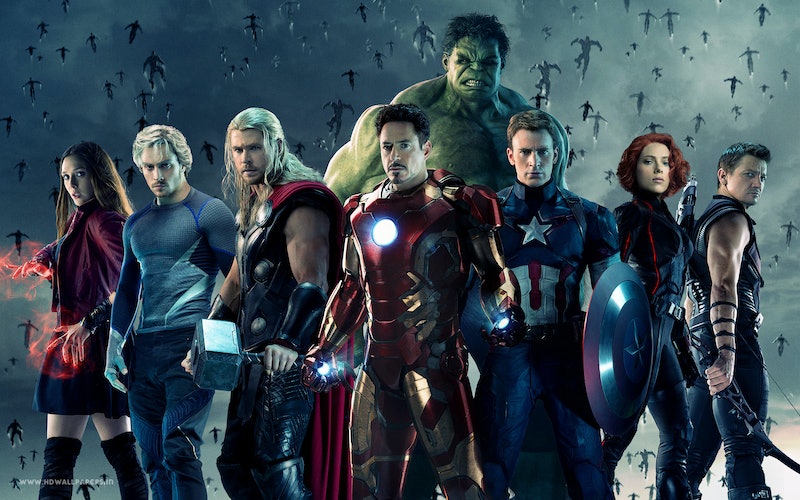 Even bearing in mind Marvel’s extant track record of setting up stories yet to come in its feature films, Avengers: Age of Ultron has an awful lot of irons in the fire. Following the stories of all six Avengers, plus the newly introduced Scarlet Witch, Quicksilver, and Ultron, is a delicate balancing act that occasionally makes for a pretty bloated film. But, on the bright side, all the different pieces of the movie offer suggestions of what we’re to expect in films like Captain America: Civil War, Thor: Ragnarok, Black Panther, and the Avengers: Infinity War films. So, how does Avengers: Age of Ultron connect to future Marvel films?

Scattered throughout the film are pieces of groundwork laid for Marvel pictures yet to come, with character cameos, plot diversions, and finale fanfare all more concerned with the future of the franchise than the picture at present. It can get a little distracting, to say the least. Tracing such Easter eggs as they appear along the linear thrust of Age of Ultron is a huge journey to undertake, but I was willing to make that journey to spare you from having to. That way, you can just enjoy the movie in its magnificent entirely without scrambling to pay attention to each little plot detail for clues to the future.

Thor is only one of the Avengers to fall victim to the hallucination-inducing superpowers of Scarlet Witch, a turn of events that occurs relatively early on in Age of Ultron. Fellow sufferers are Tony Stark (whose premonition of a team of dead friends launches his mission to create an artificially intelligent force to protect the planet), Steve Rogers (whose flashback to a David Lynchian 1930s abets his consistent “man out of time, man out of place” character theme), and Natasha Romanoff (whose visions of her haunted past allow for an in-movie exploration of her deep-seated self-loathing and loneliness).

Thor’s fugue state launches him to a future of destruction and dismay befalling Asgard, with a glowing-eyed Heimdall (that’s Idris Elba) faulting the frantic son of Odin for the deaths of his people. To confront this precognitive nightmare, Thor insists upon a tangent in which he and Erik Selvig (Stellan Skarsgard) take a moonlit dip in a mystical pool, effectively setting up the premise of his 2017 film, Thor: Ragnarok, in which the hammer-wielding god will have to protect his alien planet from a wave of total annihilation.

Even further removed from the central Avengers’ story (in that it involves exactly zero Avengers) is the setup for Black Panther, as introduced by Scarlet Witch and Quicksilver’s visit to South African criminal Ulysses Klaue (Andy Serkis). The ruffling of his feathers, decimation of his crooked operations, and removal of one of his arms preps him almost without room for error as the villain for the forthcoming 2018 Chadwick Boseman picture.

In some small way, all of Avengers: Age of Ultron acts as a setup to Captain America: Civil War, a notion that feels kind of backwards when you consider the Phase I model of using the standalone pictures as building blocks toward the grand union rather than vice versa. But the ideological spats we see kindling between Tony Stark (championing an almost Orwellian level of controlled safety) and Steve Rogers (who fears the sort of tyranny he fought back in World War II) will erupt further in next year’s face off.

At the end of Age of Ultron, Captain America inherits a new team of Avengers: Scarlet Witch, Vision, War Machine, Falcon, and, of course, Black Widow — the team who’ll take his side come the terrific fissure that we’ll see in Civil War (whereas Tony Stark will earn the camaraderie, we suspect, of Spider-Man, among others). The new collection of Avengers also gives way to…

…the colossal two-part be-all and end-all that finally allows that do-nothing Thanos to wield his power over the universe. And this brings us back to Thor, whose vision quest also clued him into the mission of some unknown being to collect the heap of the Infinity Stones and use them for some unthinkable bout of demolition. So we’ve got that coming in 2018 and 2019. But at least it’s something we can hang our hats on, unlike…

Okay, so cinema has a pitiable track record when it comes to Hulk movies. But anyone familiar with the story, in which Hulk is sent on a one-way trip to Mars in order to safeguard the human population from his uncontrollable rage, won’t be able to help entertaining the notion upon watching the big, green Bruce Banner fly off into solitude at the end of Age of Ultron, refusing the beck and call of his beloved Natasha Romanoff. We can dream.

Putting the ending of Avengers: Age of Ultron right up against that of its 2012 predecessor, we can see straight away how much this franchise has changed in the past three years. Just as Avengers: Age of Ultron does, the close of The Avengers sends each of its characters off on his or her own way, with Steve Rogers and his motorcycle laying claim to the final shot. In that simple, nebulous ending, we knew an air of mystery, possibility, and hopeful intrigue — a stark contrast to the certain fates that drape every figure at the end of Ultron.

Sure, Easter eggs playing on the plots of Civil War, Ragnarok, and Infinity War give us something to look forward to, but it’s hard to be quite as wowed by demigod expositing his next move as we were by Cap’s wistful grimace as he rode that old chopper off into the sunset.