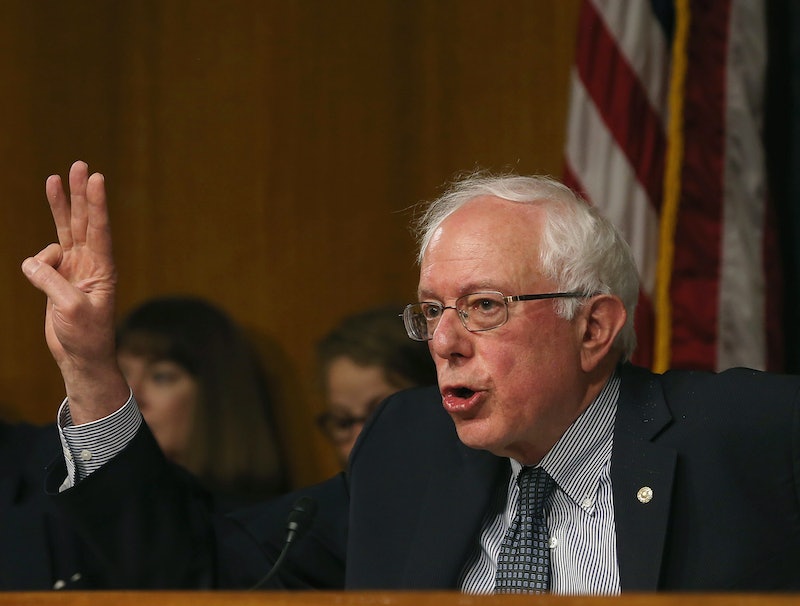 Well, we've finally got another Democrat in the race to stand-off against Hillary Clinton! At least, kind of. Although he personally identifies as an independent socialist — that's right, GOP, there are actual socialists in Washington — Vermont Senator Bernie Sanders will run for president in 2016 as a Democrat. Sanders announced his candidacy on Thursday, and now, well, he's in it! He's not exactly a household name, however, so maybe you have some questions. Like, where does Bernie Sanders stand on Israel?

It's a pretty important question for any would-be Democratic presidential contender, even though Sanders' hitherto scant resources might preclude him from posing a true challenge. Israel is, after all, America's foremost Middle Eastern ally, despite apparent tensions between Prime Minister Benjamin Netanyahu and President Obama. And in a general election, any criticism of Israel or its military operations is something of a political third-rail — or that's how it's treated, at least.

This can lead to some odd, awkward moments when Democrats (or independent left-wingers like Sanders) field questions from their constituents. The American left tends to be much more sympathetic to the Palestinian people than the general public is, or at least that's the perception within major party politics, and that can put somebody who's otherwise well-aligned with a liberal crowd in a tough spot.

Take Sanders' town hall event in August 2014, for example. Sanders got embroiled in a tense Q&A session on the topic of Israel. He was challenged by a constituent regarding Israel's military operation in Gaza, called Operation Protective Edge. A weeks-long bombing campaign, Protective Edge ended with more than 2,000 people dead, the majority of them Palestinian non-combatants, according to the United Nations Office for the Coordination of Humanitarian Affairs.

Basically, as Sanders explained his view — he claimed that Israel "overreacted" and wrongly bombed U.N. facilities, but the country was also faced with Hamas-fired rockets shot from populated areas — he was met with an angry interruption. Before you know it, he was yelling "shut up," and a woman in the back of the room was yelling "F**k Israel!" It was ugly.

This pretty well demonstrates the difficulty in figuring out the true feelings of some ostensibly left-wing politicians on the Israeli/Palestinian conflict. The exchange does give some insight into Sanders' opinions, however, even if he felt he had to ever-so-cautiously offer them to a home crowd in Vermont.

Basically, he's further left than most mainstream American politicians on Israel (although the White House itself was quite outraged by the U.N. shelling incident) — but he's not willing to overlook the safety concerns of the Israeli government or citizenry. He also affirms his belief that Hamas wants to destroy Israel — an existential enemy, in other words.

And this is where it might get tricky for him: Among the same far-left circles he really depends on for support, he might still be out-of-step on Israel/Palestine. But then again, it's not as though there's going to be a candidate that's going to outflank him on this — there probably isn't a further left candidate running in 2016 than Sanders, which makes it pretty unlikely you're going to hear too much trenchant criticism sent Israel's way.