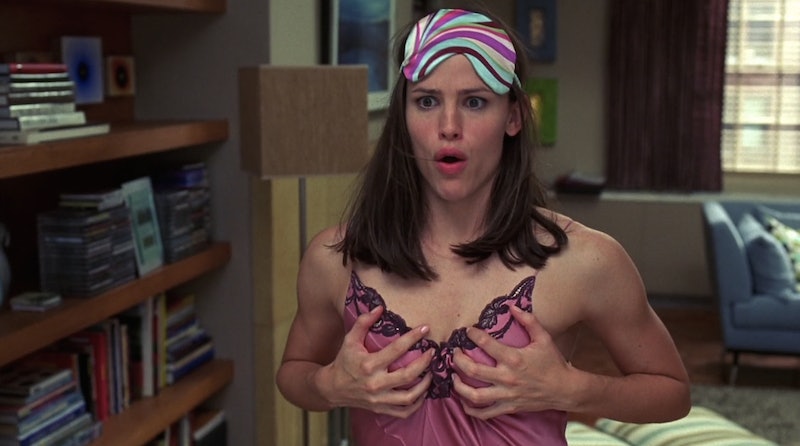 13 Going on 30 is a throwback on top of a throwback: it features both regretful fashion from 1987 AND 2004. It is also, and you'll have to keep this a secret, 13 Going On 30 is one of my favorite romantic comedies... and by default, kind of cheesy sometimes, in an adorable way. So for all those reasons, it's inevitably the perfect film to revisit for this week's movie rewatch.

Let me get you up to speed on the plot. 13-year-old Jenna Rink (Jennifer Garner) wants to be 30, flirty and thriving, and gets her wish thanks to some ill-placed magic glitter. She wakes up an editor of one of the hottest fashion magazine in the world, Poise, and finds out she got everything she ever wanted... and also became a horrible human being in the process. Will reconnecting with former BFF Matty (Mark Ruffalo!!!) help her adapt to this New, Improved Jenna? Or will she just make awkward, outdated references and wear tacky green eyeshadow? Guess.

Cute as it may be, there's a lot ridiculousness at work here, and quality wise... well, it's no Big. But in recognition of its guilty pleasure status, and the passing of its monumental 11th birthday (shut up, every year matters), I chronologically captured the silliest moments from this timeless rom-com.

1. When Matty invented the selfie.

2. When everything with the Six Chicks was wrong.

That kind of flat-ironed straight hair would make you a social leper in the '80s, and they're about two or three girls over the standard limit of Mean girl Clique. Unless the two to the far right are alternates looking to make the final cut, which makes TOTAL sense.

3. When Jenna's watching TV on a microwave.

Oh no... that's an actual TV. It's so daunting to see one of those in lieu of a Macbook Air.

4. When Matty proved to be a potential serial killer.

"Hey, I made this dream house complete with a miniature you TAKING A BATH, I hope that's not the creepiest thing you've ever heard.

"I wanna be 30, flirty and thriving!" she shouts to the heavens while systematically banging her head against the closet, making a strong argument for why she should be popular.

I get that waking up suddenly 30 is something to adjust to, but let's not sit here and act like we have a Kate Upton situation on our hands.

7. WHEN THIS ENTIRE APARTMENT WAS AFFORDABLE ON A JOURNALIST'S SALARY.

Jenna's allegedly an executive editor, but considering that she has an editor-in-chief, let's say she's more of a senior editor. The average senior editor makes approximately $70,000, give or take — and those stats are from 2015, according to Glassdoor.

This location places her in a luxury condominium near Union Square.

8. When this shoddy business work happened.

9. When Jenna rents a freaking limousine to go to a stupid party.

10. When Jenna doesn't get wasted after one and a half Piña Coladas.

I don't care if she has the body of a 30-year-old woman, any early teenage mind tricks itself into thinking they're waaaaaay drunker you are once they get a sip of alcohol.

11. When Mark Ruffalo half-asses it through the Thriller dance.

12. When Jenna tearfully wore a Muppet.

Or it may be Faux-Muppet. I'm not entirely sure.

That's... not really a rule, that's kind of just a general statement.

So many nightmares realized.

15. When Jenna was an Autumnal Beyoncé.

How does she not end up asylum bound after this scene?

17. When Jenna and Matty conceptualize a sexy photoshoot of balloons.

It's really going to compliment the Chanel.

18. When Jenna, who's making constant efforts to be a better person, makes out with someone else's fiancé.

Showing so much personal growth, this one.

19. When that kid on the far right was the best character ever.

20. When Lucy's big pitch for redesign basically to advocate the death of fashion.

It falls flat because of course it does, it's a terrible idea.

Here's the thing, while the photographs are high quality and the concept endearing — photographing real women and putting a focal point on real life — this would never fly. The sad truth is, kids, the magazine industry is just that, an industry. While digital media has made great strives with featuring more empowering pieces that focus on "real" women, or bringing in "realness" with relatable listicles and personal "It Happened to Me" essays, print media isn't about to forgo on their ways... because their element of glamour is what keeps copies circulating.

Let's say Vogue decides to use "real" women in an editorial, it works great as a novelty piece. But what if Vogue decided suddenly "real" women to model "real" clothing and photographed them in "real" settings? No more Annie Leibowitz, no more Cara Delevingne, farewell Prada, Dior, and Rodarte. It's suddenly nameless faces wearing Target, all shot with iPhones. The magazine simultaneously loses their sponsors, and all hell breaks loose. It isn't something I agree with, or something I try to endorse, but it's the sad reality: glossies can't currently afford to let go of what makes them high fashion and artistic, and yes, unattainable.

23. And finally, when Jenna goes back in time and resolves to forgo a life of fashion, style, power and glamour... to marry the kid next door.