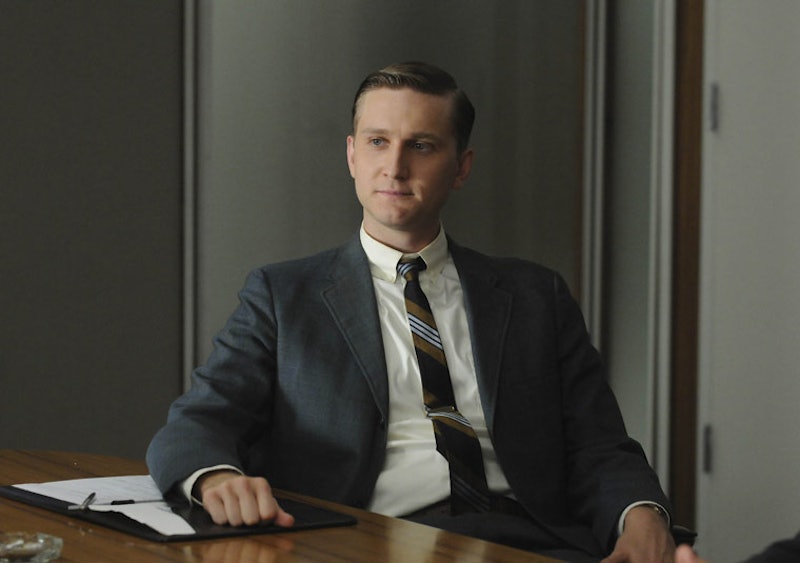 Mad Men is a true ensemble show. The lead cast is large, and each season brings plenty of opportunities to showcase the supporting characters. So trying to choose a single favorite character is difficult — but not for me. Ken Cosgrove is, without a doubt, my absolute favorite character on Mad Men.

I know it sounds like a strange choice. After all, the accounts manager rarely gets his own real storylines and is often missing for a few episodes per season. But when we finally get to catch up with Kenny, played by Aaron Staton, it's always worth the wait. As much as I wish Kenny was front and center for every episode, it just makes it that much more special when he does appear — even if he is getting shot in the face and giving me a heart attack. Here are just some of the many reasons that I love Ken Cosgrove.

The characters on Mad Men are incredibly well-written. They're all complex and played by great actors. But they also tend to be awful people. But has Ken ever cheated on his wife? No. Has he ever backstabbed someone else at the agency? No. Is he a near-constant drunken mess? No. Ken is proof that genuinely nice guys can exist in the world of Mad Men.

Last season, Ken and Peggy had a deal that if either of them left SCDP, they'd bring the other with them. He was planning on keeping his word... until Peggy completely abandoned him for CGC. And, even though the partners bafflingly chose Pete as their accounts man for the new agency, Cosgrove eventually joined them at SCDP.

His Wife is Alex Mack

The extremely lucky Mrs. Cynthia Cosgrove is played by Larisa Oleynik, or Alex Mack from the Nickelodeon classic, The Secret World of Alex Mack. She was also in The Babysitters Club movie, Boy Meets World, and 10 Things I Hate About You — basically everything you loved in the '90s. Not only does Ken have an awesomely cast wife, he actually loves her. Their relationship is sweet whenever we get a glimpse of it, and he was hesitant to chase her father's company as an account — unlike a certain other accounts man.

He's About to Be a Great Dad

First a great husband, now a great father. In last week's episode, Ken, who has been treated horribly by Chevy this season, asked to be removed from the account because Cynthia is pregnant. He doesn't want to endanger himself or spend so much time in Detroit when his child is born (even though he totally rocks that eye patch). Guess who jumped at the chance to join? That's right, world's worst husband/father/human, Pete Campbell. Please Matthew Weiner, give us just one scene next season of Ken being adorable with his baby.

Since he doesn't have any mistresses, outside of work, Ken spends his time writing sci-fi stories that actually get published. Of course he co-workers are jealous of his talent, but even when Roger says he has to stop, Ken just changes his pen name. Keep writing Ken — I believe in you. Maybe the series will end with his book becoming the next big thing in sci-fi —or maybe it will end with Sterling Cooper & Partners being his book.

Seriously. Do you need another reason?