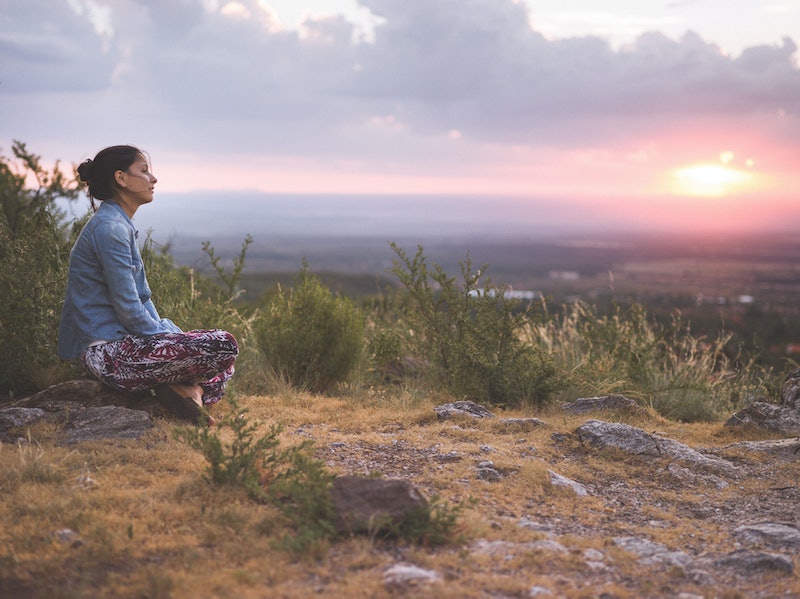 If you perpetually have no idea where you left your shoes/phone/youngest child, a little bit of memory improvement might be for you — and science is here to help (::cue trumpets::). The good news? Studies have tended to find that people with bad memories can make pretty simple changes to help their brains retain the bits they need, from small lifestyle changes to easy shifts in how you think about information itself. No drugs, no need for hypnotism or reciting something 1000 times; just some easy-as-pie steps so that you don't continually feel like killing the person who says, "Where did you last see it?" (I don't know, that's why I can't find it.)

First, a few details about what memory actually is: it's got two parts, working memory (which is where we store things we only need to remember temporarily, and where songs get stuck in our heads), and deep, long-term memory (which contains both conscious and unconscious memories of our lives and feelings). A lot of memory takes place in the hippocampus, and we've just figured out how the brain physically makes memories — it involves microscopic filaments called "spines" touching each other gently, like they're on an awkward date. Scientists hope to be able to reproduce that process artificially one day, to help people with Alzheimer's and dementia rebuilt their damaged memories.

Before we get to that point, however, we're stuck with doing it ourselves. So here are six tips from science on how to improve your memory. Ohhh, that's where I left that.

1. Have a (moderately) challenging job or hobby.

The old "your brain is a muscle" idea actually isn't all that far off. A new study by the American Academy of Neurology has discovered that people who have seriously challenging jobs or hobbies in their lives tend to stave off age-related memory loss in later life.

The study asked professionals to rank what their job was like over three categories: executive (developing strategies and firing people), verbal (doing presentations), and fluid (analyzing data). If their jobs involved high levels of all three, they completely blitzed a memory test.

However, this can backfire a bit if the job is too challenging and drives you mad with stress. Another study last year showed that too much stress hormone was linked to short-term memory loss in adults. So do something that pushes you, but try not to let it stress you out.

The latest idea at the party of memory-boosting science is about how good sleep is for your brain's memory capacity.

A new study did a (slightly strange?) experiment on fruit flies, watching how various levels of increased sleep affected their memories of stuff like courtship dances. The fruit flies who'd had many hours of Zzz's managed to do the finest strutting for partners, because sleep had a huge boost on their memory. It's been backed up by a study from China, which found that sleeping is when the human brain does a lot of its neuron-production. Getting a good night's sleep looks to be a bonanza for memory, human or not.

This advice looks to be confined purely to young people whose brains are still highly plastic (i.e. up until you're 20-30), but omega-3 acids, specifically one called DHA, which is found in fish and fish oil tablets, has been shown pretty comprehensively to help working memory in youth. Why? One study from 2012 thought they'd found the answer: that the acid helped inter-neuron communication, essentially helping the different parts of the brain talk to one another more efficiently. So get more oily fish into your diet, STAT.

Sorry, couch potatoes (of which I am one, and in my defense my couch is so comfortable one of my friends proposed to it) — exercise has yet another mark in its benefits column.

A study in 2013 found that regular aerobic exercise significantly improved human memory as people aged. Exercise increased the blood flow to the hippocampus, the brain's memory center, and participants who were twice as aerobically fit as their peers made 25 percent fewer errors on a memory test.

Ever hear the term "memory palace"? Benedict Cumberbatch referred to using one in his turn as Sherlock, bringing a heap of attention to what's actually a seriously old technique dating back to the ancient Greeks.

Memory palaces are a means of "storing" memories in locations that you visualize in your head, meaning that recovering them is as simple as thinking about "walking through" that place. The U.S.A.'s own "Memory Champion" uses his own house as his memory palace, walking through it to recover memories he's stashed in various rooms. Even if you're no Sherlock, though, visualization techniques are pretty highly recommended.

While so-called "brain training" games are currently facing a flood of criticism —70 of the world's leading neuroscientists signed a petition last year saying that science "does not support" any claims that the games improve your memory — there's an exception: Sudoku.

It's not proven to work for youngins, though: they've only discovered that Sudoku, the Japanese number puzzle, slows up memory loss in adults with a high genetic dementia risk or who are already showing signs of mental decline. Crosswords have been the subject of similar claims in what's called "geriatric science."

There's currently no evidence that it might help people at a younger age — but hey, can't hurt, right?

More like this
6 Abortion Advocates To Follow On TikTok
By Sara Youngblood Gregory
How 5 People Upended Their Lives To Fight For Abortion Rights
By Hannah Smothers
Lily Allen Was “Quite Emosh” After Performing Sober At Glastonbury Festival
By Stephanie Topacio Long
Here’s How Lizzo Is Supporting Abortion Rights After The Roe v. Wade Reversal
By Brad Witter
Get Even More From Bustle — Sign Up For The Newsletter