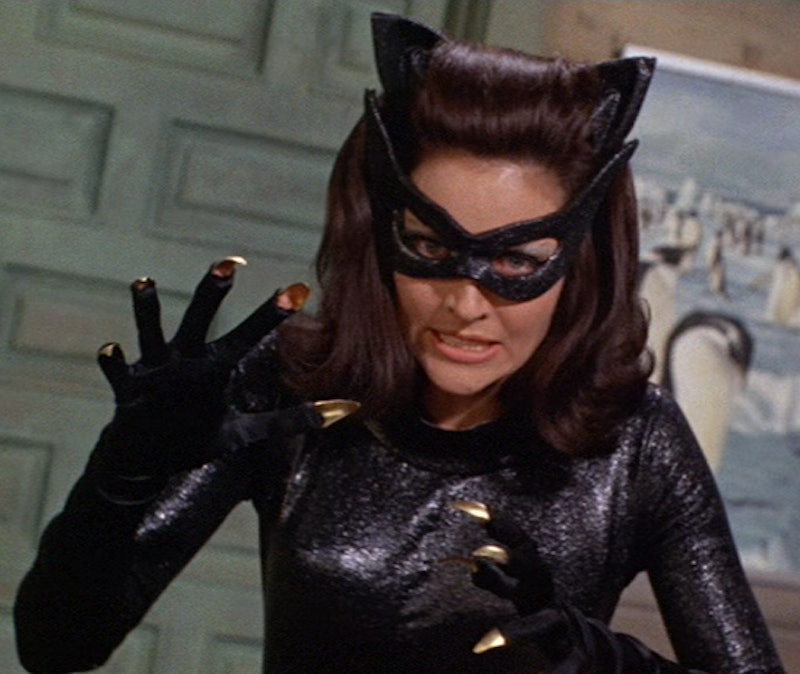 Selina Kyle (a.k.a. Catwoman) is a part of comic book and comic book movie history, and Catwoman's stylish fashion has been much adored since the 1960s when Julie Newmar first portrayed her in the Batman TV series. No matter who has played the role of Catwoman over the years, you can guarantee her outfit consists of something slinky — a nod towards her feline friends and a catty weapon.

However, not all of the cat women were created equal. Some Catwoman costumes are super saucy, others are a bit creepy, and some give out awesome, bad gal vibes. And many of her outfits reflect the time period and general ideals within society at the time they were made.

For the purpose of this article, I will stick to analyzing clothes worn by Catwoman played by real women in live action movies and TV shows. I have chosen to go down this route as I think there are three main media streams in which to consider Catwoman, which include: live action, comic books, and cartoons. I think it more fitting to compare only the live action versions of Catwoman as she is wearing actual clothes, as it could be tricky to discuss these versus illustrated ensembles. One could compare her comic book and cartoon outfits more simply because they are all drawings. But I do not think the live action costumes are directly comparable to the animated/illustrated ones. So, shall we begin?

As well as being the first Catwoman in the aforementioned Batman TV series — I bet she loves telling people that, I would at every opportunity — Ms. Newmar was also the first to wear the slinky catsuit. With its shiny belt, Newmar's catsuit gives a nod towards the upcoming disco era of the '70s. The rest of her outfit is comprised of: cat ears, gold necklace, cat mask, ankle boots, and golden-clawed gloves. She's got an (almost literal) Goldfinger Bond girl vibe going on, which would make sense as the 007 movie was released within two years of the series. Newmar's Catwoman had humorous weapons such as "sneeze bombs" and the brainwashing chemical "Cataphrenic."

Also, would you check out those fabulous, feline brows? Newmar's eyebrows are so on fleek and she also has a cat eye — she's just purrfect.

Due to portraying the same Catwoman as Julie Newmar in the Batman TV series, not much changed between these feline outfits. She still had the necklace, the catsuit, and gold nails. However, her ears are slightly higher on her head and she is sporting an up do. Maybe this was because the creators realized it's hard to fight crime when your hair is in the way! Kitt's Catwoman weapons continued to be comedic, such as the "hair-raising bomb," which destroyed the hairdos of women in the surrounding area. Although it appears the feline eyebrows got binned.

Lee Meriwether was the first live action Catwoman to star in a Batman movie — the 1966 film, aptly named Batman: The Movie. In this particular adaptation, Catwoman is an all out villainess — she masquerades as Ms. Kitka and joins the other Gotham bad guys to try and take over the world. It appears she is only in the movie to play the part of Batman's love interest.

As the movie was released in the same year as the TV series, Meriwether's attire is extremely similar to her TV counterparts'.

My all-time favorite Catwoman, Michelle Pfeiffer played the role in Batman Returns, Tim Burton's second Batman movie. Before becoming Catwoman, Selina Kyle is a shy little mouse who lets people push her around. However, after her transformation, Kyle becomes a dangerous, psychopathic pantheress. One of the coolest things about Pfeiffer's Catwoman is in fact her metamorphosis and, of course, her costume design skills — this woman knows how to sew! Plus, I am quite the Tim Burton fan and I love the dark twist he put on Catwoman.

Pfeiffer's Catwoman wears a vinyl catsuit, clawed gloves, a full-head mask and her weapon of choice is a bondage style whip. This version of Catwoman evokes feelings of the "grunge" trend, which would be right on cue for this '90s movie. She is also blessed with some serious one-liners and catty wit, which Pfeiffer pulls off perfectly.

In contrast to Pfeiffer's Catwoman, Halle Berry's noughties portrayal in the Catwoman movie is my least favorite and for a number of reasons. Someone fetch me a saucer of milk — I'm feeling catty! First off, let's tackle the issue staring us in the face: her outfit. This Catwoman outfit is comprised of low-rise ripped trousers, long, clawed gloves, a full head cat mask, and oh, a bra. This outfit is vile IMO. Next there's the major character catastrophe that this Catwoman isn't even Selina Kyle, she's called Patience Phillips... What?! Selina Kyle and Catwoman are the same person, who is this imposter called Patience?

If that wasn't enough, her general portrayal — she appears to exist for the sole viewing pleasure of men — is degrading. Yes, she's got her whip and she uses it, but don't get me started on those camera angles...

Anne Hathaway has always been quite the little sex icon. She has often been seen in other movies clad quite scantily or fully nude. But in Christopher Nolan's The Dark Knight Rises she keeps covered up in a classic catsuit. A huge difference between Hathaway and the other ladies is that her character is only referred to as The Cat. She is still Selina Kyle, but there is no mention of Catwoman, even though we all know that's who she is. I wonder if this decision was to try in some way to desexualize her, so that she was a refreshing change to the overtly sexualized cat women before her?

She has also had a modern makeover. Her "ears" are actually high tech goggles placed on her head and the whip has been replaced with guns. Her catsuit, although attractive, looks highly functional and appears to be made of a thick, high-quality leather. Hathaway's Catwoman is like a female Robin Hood: She burgles from the rich and is totally on the side of "the people." One of her famous lines exemplifying this is:

"There's a storm coming, Mr. Wayne. You and your friends better batten down the hatches, because when it hits, you're all gonna wonder how you ever thought you could live so large and leave so little for the rest of us." — Selina Kyle.

In my opinion, Hathaway's version of Catwoman is a metaphor for society at the moment. Because of the media, we are all very aware that a small proportion of the world's people/companies have enough money and resources to put an end to others' suffering, protect the environment, or generally do great things. Yet not many are stepping forward. This kick ass, motorbike-riding Catwoman wants to even the playing field.

At just 15 years old, Camren Bicondova plays a young Selina Kyle in hit TV series Gotham. Don't let her age fool you into thinking she's innocent and naïve, though. This strong, young woman is sadly an orphan and lives on the street. Her attire definitely reflects the need for comfort and warmth over slinky style. However, at this young age, technically she's not actually Catwoman yet, but rather Selina "Cat" Kyle, with "Cat" being her nickname. She wears mainly monochrome colors including ripped jeans, a leather jacket, a grey hoodie, and fingerless gloves. She also has some goggles, which she sports occasionally.

I imagine she would most likely evolve into a modern Catwoman such as Hathaway's portrayal, considering the hard life she has lead and the fact that she started wearing leather already.

So will there be a Catwoman in the upcoming Batman v Superman: Dawn of Justice film? And how will young Selina Kyle transform as she matures? We'll just have to wait and see!