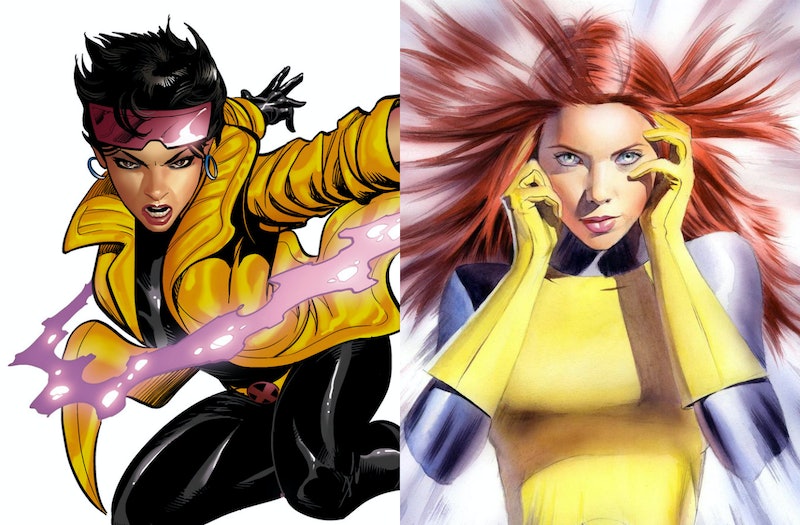 We're going back to the '80s for the next X-Men movie. Director Bryan Singer must've had such a totally outrageous time depicting this time period in X-Men: Days of Future Past , that there was no choice but to go back for the sequel, X-Men: Apocalypse . To get us pumped as production is currently underway, Singer unleashed a first official behind-the-scenes look at X-Men's two new characters that will bring some girl power to the superhero film: Jubilee and Jean Grey!

Virtually unknown actress Lana Condor plays Jubilee, while Sophie Turner, best known for portraying Sansa Stark on Game of Thrones, is our new Jean Grey. Since the first X-Men film in 2000, actress Famke Janssen has been our telekinetic, telepathic, mind-manipulating redhead mutant — but the '80s setting means that Singer can include younger versions of these characters.

As for Jubilee, the filmmaker has wanted to include her in a large capacity for ages. There were even concept art images created for Days of Future Past , but, unfortunately, the character was ultimately cut from that film. The character, whose ability is to shoot firework-like blasts of energy from her hands, was featured in the background of X-Men and in a deleted scene in X2. But I'm glad she's now able to step into the spotlight, especially with that adorable yellow jacket.

Check out the first photo of the two direct from Singer's Instagram.

Notice how Jubilee's shirt, which says "Bring On The Light," is an homage to her powers. Gotta love it!

Singer released other photos from the first few days on set. So far, we know that one scene will take place in a mall and feature Jubilee, Jean Grey, Cyclops (played by Ty Sheridan) and Nightcrawler (Kodi Smit-McPhee). Malls are significant to Jubilee: In the comics and in the X-Men animated series, she lived in one and stole to survive, having lost her parents at a young age. Her powers eventually attracted the presence of the X-Men, who offered her a place at Xavier's School for Gifted Youngsters. It's unknown if X-Men: Apocalypse will follow this same story, but a mall can't be a coincidence.

Elsewhere, Singer described the character of Jean to Empire magazine as "complex, interesting and not fully mature." He continued, "It’s fun to see someone struggling with their powers when you know one day they’ll become the most powerful person in the world." For those unfamiliar with the movies or the comics, Singer's referring to Jean's chaotic powers, which eventually become so great that she becomes the Phoenix, as shown in X-Men: The Last Stand.

X-Men: Apocalypse won't hit theaters until May 27, 2016. Hopefully our next few looks from the set are as enjoyable as this one.