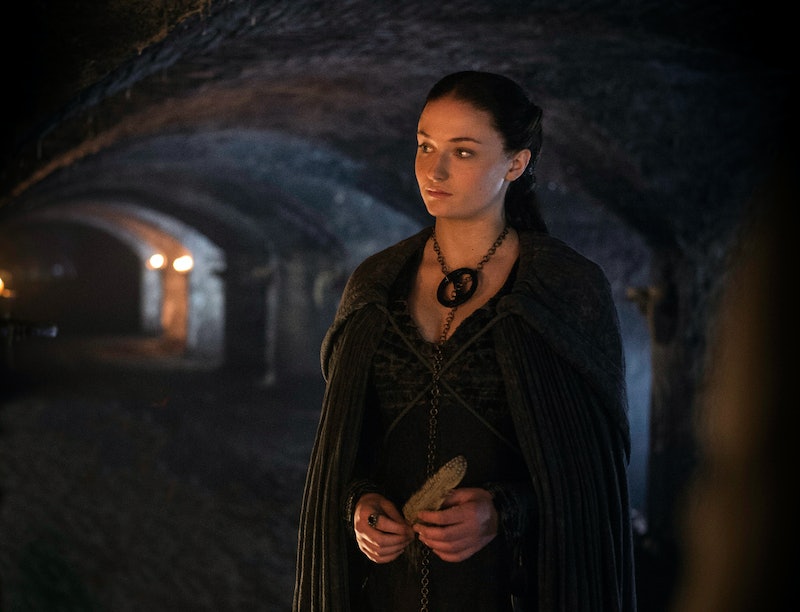 In the words of Joni Mitchell, "You don't know what you've got 'til it's gone" and Sansa Stark had no idea how good she had it being married to Tyrion Lannister on Game of Thrones. Now that damn Littlefinger arranged her marriage to the artist-formerly-known-as Ramsay Snow, could Sansa kill her Ramsay Bolton, her soon-to-be-husband? She already avoided one marriage to a psychopathic, young man (*cough* Joffrey *cough*), but she's got another on the horizon already in Season 5. Sansa is still technically married to Tyrion, but that fact does not matter to Petyr Baelish. The master manipulator has decided to marry off his dead love's daughter to Lord Roose Bolton's recently un-bastardized son.

The HBO show is taking a turn from the books with this plot point. In the books, Ramsay marries a different character not in the TV show (Jeyne Poole). Showrunner David Benioff told Entertainment Weekly, "We really wanted Sansa to play a major part this season. If we were going to stay absolutely faithful to the book, it was going to be very hard to do that." And with the plots changing, EW warned that the fates of these characters could change from the books too, for you readers out there.

Sansa initially was disgusted at the idea of marrying Ramsay (and she doesn't even know what a terrible dude he is) in April 26's episode "High Sparrow." Ramsay's father, Lord Bolton, betrayed her brother Robb and killed him at the Red Wedding (where her mother, Catelyn, was also murdered). So understandably, Sansa wasn't super keen on the nuptials — especially since she thought Littlefinger was the one who was going to be getting married.

But Littlefinger gave her a pep talk about how it's time for her to no longer be a "bystander to tragedy" and she needs to "stop running." He topped his speech off with, "There's no justice in the world, not unless we make it. You loved your family — avenge them." She agreed to return to Winterfell and was on her best behavior when she met the Boltons. Well, really Ramsay was the one who was on his best behavior since Game of Thrones viewers know what the demon is capable of.

So will Sansa have what it takes to avenge her family? Her evolution from spoiled brat who wanted to be a princess to the young woman who has seen a parade of horrors and is constantly being offered up to the highest bidder has made Sansa was one the most sympathetic characters on the show. (And trust me, I hated Season 1 Sansa.) Sansa avoided being tortured at the hands of Joffrey and right now, it looks like Ramsay will not be abusing her as to not piss off his father. (Ramsay also promised Littlefinger that he wouldn't hurt her.)

But his father still killed her brother, and she's been under the tutelage of Littlefinger for the past few months who knows how to play the game. Plus, Sansa was also in King's Landing for the better half of her developing years. And if Cersei is good for anything, it's manipulating situations, so perhaps Sansa learned something from the Queen Mother and is playing it cool while she creates a plan to hit the Boltons.

In the second Season 5 trailer below, around 31 seconds, you can very quickly see Ramsay sexually torturing a young woman (who appears not to be Sansa?) and then Sansa creeping around the Winterfell crypts by candlelight.

Perhaps she has intentions of killing Ramsay since she can get close to him in private situations, while killing Lord Bolton would be much more of a challenge for her. But if she walks into that Ramsay bedroom scene or hears rumors of how horrific he is, she'll know she will need bigger guns to take down the evil son of Lord Bolton. If that's the case, she should enlist the help of Theon a.k.a. Reek, who clearly recognized who she was. Or Brienne who is headed toward Winterfell with Pod. Or Jon Snow who could take up Stannis Baratheon's offer to take back Winterfell as Jon Stark! The possibilities of good guys helping Sansa are kind of endless for the first time ever. (Let's just not get too excited since this is Game of Thrones and feeling joy while watching is not really an option.)

Although Theon was so mentally unstable that when his own sister tried to save him from Ramsay that he didn't go with her, Sansa's appearance seems to be reaching him. Sansa was actually the girl who grew up with Theon and is more like a sister to him than Yara was. I'm hoping her appearance shakes Reek and brings back memories of Theon. He would be a great ally for Sansa since he has some serious insider knowledge of the Boltons if he can escape the physical and emotional prison that Ramsay has put him in.

If Sansa does try to avenge her family, I just want her to take her time with her plan. Because you don't become someone like Littlefinger or Cersei overnight. And unfortunately, I expect Ramsay to do some truly disgusting stuff before her day of vengeance comes since EW reported that "Ramsay finds a new plaything to torture" this season. Although I don't want anyone to suffer at the hands of Ramsay, I'm going to have faith that Sansa won't end up being his plaything and that she'll be busy playing her own game of strategy.