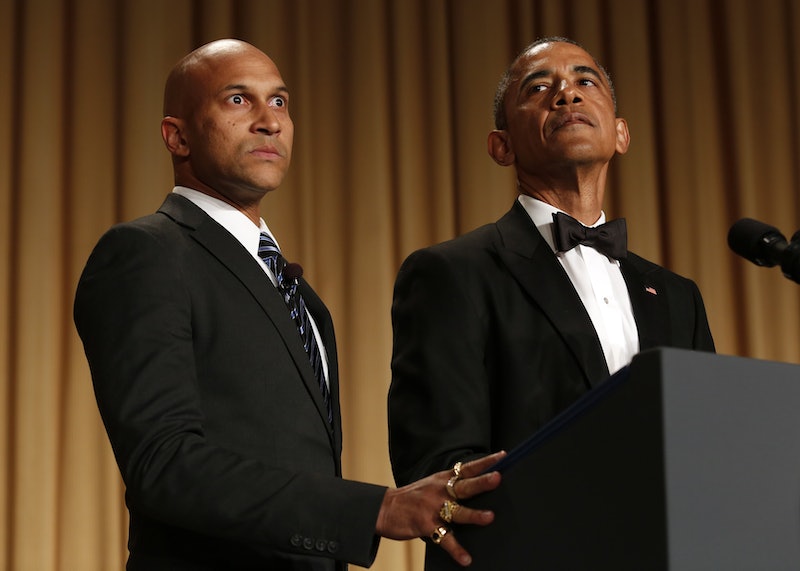 All of my celebrity crushes are comedians and/or anyone who can dance, and after the latest season of Key & Peele and the White House, the latest entry on my list is Keegan-Michael Key. Yes, there are plenty of reasons to crush on Keegan-Michael Key, not least of which is the fact that he is everywhere right now, from Comedy Central (obviously) to the CW on this Friday, where he'll take his talents to Whose Line Is It Anyway. He'll be on hand to play with the rest of the cast and make everyone laugh on May 1, ushering in the new month with improv games. I greatly appreciate when Aisha Tyler and Key are sharing the screen, because I get two crushes for the price of one hour of DVR'd entertainment. After all, Whose Line is pure early Saturday morning breakfast television — just know that you probably don't want to have a hangover that's too bad while you're watching it (there's a lot of high-energy yelling).

There's a trend in the entire comedy television scene of hiring more and more people who aren't just hilarious and skilled and kinda good looking, but also come across as just the cross section of nicest and hardest working people on Earth. And KMK is one of the best examples. Also, these are just my personal reasons... I'm sure everyone has their own baker's dozen of reasons to appreciate Keegan Michael Key.

He's appeared on Whose Line before, and he's one of their better guests... the guy didn't just waltz onto the set of his own Comedy Central show.

2. He Was One Of The Best Parts Of Mad TV

I know for plenty of y'all that Mad TV is just the discount Saturday Night Live, and their love of ethnic stereotypes and instantly dated pop culture parodies doesn't really disprove that, but their casting department was on point. Note this early sketch that seems like the first version of his now-classic substitute teacher.

3. He Has The Most Adorable Relationship With Jordan Peele

You really get the sense that they're actual friends, and I'm all about imaginary boyfriends that have real best friends that I also want to be friends with.

4. He Wasn't Upstaged By The President Of The United States

And he delivered a flawless performance as Luther the Anger Translator during the White House Correspondents' Dinner. That's talent. #TeamTalent

5. He Rocks The Bald Head

Most of the time, bald is not the freshest look. Not so on KMK! I have to admit, even as a die hard "hair on dudes" person, he manages to make it look good.

He will be performing with Sarah Silverman, Retta, Garfunkel & Oates, and a bunch of other talented ladies in REALgirl Foundation's "Stand Up For Girls" fundraiser/event.

7. And It's a Feminist Charity

Yes, this gets its own entry on the list. Finding out a celebrity crush is a confirmed feminist multiplies the existing crush by 5000 percent. It's just math.

"White and Nerdy" got a lot of play at my middle school.

I don't even have anything to add.

If we can call it out when lady comedians like Julia Louis-Dreyfus somehow get even better looking as they get older, than why not do the same for the opposite gender? Dude looks significantly younger than 44.

Literally all of my crushes have to be considered politically/socially relevant and be appropriately awarded for it. Sorry bout it.

The rest of my points are more on the objective cool person/awesome potential friend category, but this is straight up swoon-worthiness. Keegan Michael Key: practical and adorable. I rest my case.

More like this
Twitter Is Identifying With Sally Field & Jane Fonda’s Friendship In New Viral Video
By Jake Viswanath
Here’s What Happens To Bill & Frank In 'The Last Of Us' Video Game
By Brad Witter
Michael B. Jordan Tackled His "Public Breakup" With Lori Harvey On 'SNL'
By Brad Witter
Who Is Murray Bartlett Dating? 'The Last Of Us' Star Is Extremely Private
By Alyssa Lapid
Get Even More From Bustle — Sign Up For The Newsletter
From hair trends to relationship advice, our daily newsletter has everything you need to sound like a person who’s on TikTok, even if you aren’t.