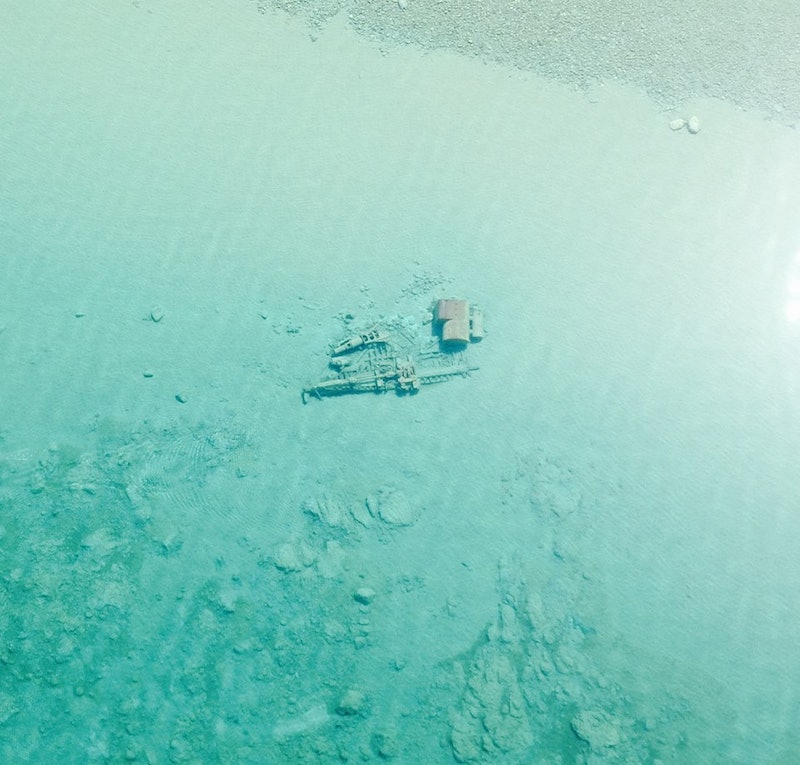 The days are getting warmer, which means the ice has melted in Lake Michigan and the water is clearer and bluer than ever. So blue, in fact, the water looks almost tropical and so clear that you can see a large number shipwrecks from the sky. On a routine patrol, the U.S. Coast Guard in Traverse City aircrew captured a number of aerial photos of shipwrecks at the bottom of Lake Michigan. They posted on the photos on their Facebook page, calling the intriguing sight “Shipwreck Sunday.”

The photos were taken from Sleeping Bear Point, an area northeast along the shoreline. Since there is so little information on the shipwrecks in Lake Michigan, the U.S. Coast Guard asked the Facebook community to reach out if they recognized any of the photographed sites. One of the fans responded with a map pointing out different known shipwrecks in Lake Michigan. The map serves as a useful resource for shipwreck divers visiting the Manitou Passage Underwater Preserve in Lake Michigan, and as it turns out, it was a great resource for the U.S. Coast Guard to figure out the ships they were looking at, as well.

In an interview with NPR, Lt. Cmdr. Charlie Wilson, one of the pilots on the routine patrol, said it’s common to spot wrecks on patrols “but not in the numbers we saw on that flight.”

The Coast Guard used the shipwreck map to identify the subjects of the photos they posted on their Facebook page. The one above is the Rising Sun. It ran aground during an early season snowstorm at Pyramid Point on Oct. 29, 1917. Now, it rests in 6 to 12 feet of water. The ship was carrying potatoes, rutabagas and lumber to another harbor when it sank.

The brig shown above created a sensation during its heyday for supposedly being the first ship to sail from the Atlantic Ocean to a Lake Michigan port. Unfortunately, the 121-foot James McBride ran ashore after encountering a gale on October 19, 1857.

The rest of the photos are just as crystalline and mesmerizing. Though the decaying skeletons of ships blend seamlessly in with the tranquil and brilliantly clear waters in these photos, it's jarring to think that it's the freshness and clarity of spring that allows us to witness the aging and rotting flesh of sunken ships.

More like this
7 Symbolic Meanings Of Autumn — From Letting Go To Self Preservation
By Kirsten Nunez
The Historical Meaning Behind Why Autumn Is Called ‘Fall’
By Chelsey Grasso
Craving The Beach? Here's Your Guide To A Solo Vacation In Turks & Caicos
By Alexis Morillo
7 Ways To Help People Impacted By Hurricane Fiona In Puerto Rico
By Carolyn Steber
Get Even More From Bustle — Sign Up For The Newsletter