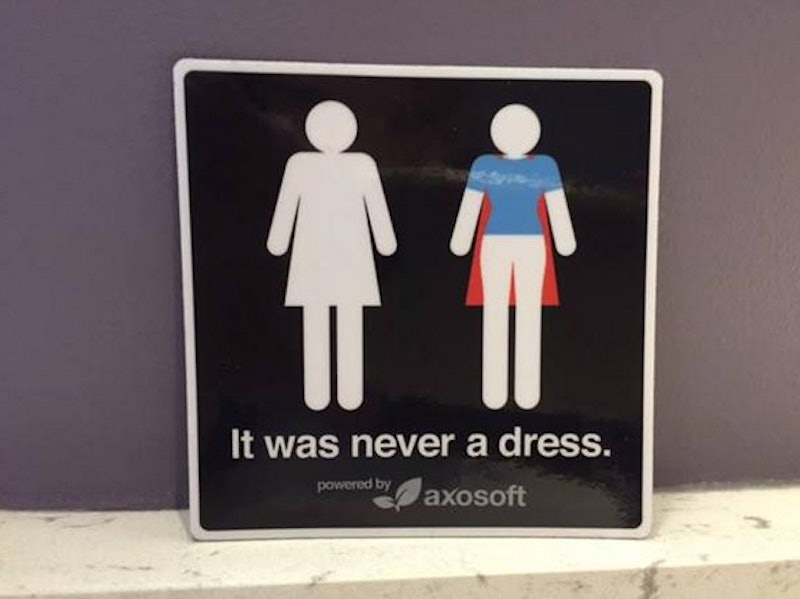 We’re taught from an early age that the easiest way to universally indicate the idea of women is with a dress. This symbol has helped to reinforce a system of strict gender binaries and norms that causes anxiety for people who look at the symbol and wonder if it's safe to identify with it, and if this vague outline of a person in a dress is what it means to be a woman. But what if the icon wasn’t of a woman wearing a dress? What if it were of a woman wearing a cape? As a purporter of the greatest plot twist of all time, the #ItWasNeverADress campaign is using this symbol to take the initiative in creating spaces for more women in the workforce where they can feel welcome, safe, and free to exist as themselves.

The project’s mission listed on its website is powerful and inspiring:

It Was Never a Dress is an invitation to shift perceptions and assumptions about women and the audacious, sensitive, and powerful gestures they make every single day. In science, technology, arts, mathematics, politics, houses of worship, on the streets, and in our homes, insightful women are often uninvited, overlooked, or just plain dismissed. Through storytelling, community building, innovation and creative disruptions, It Was Never a Dress will foster necessary conversations, vital voices, and images from around the world that honor ALL women. When we see women differently… we see the world differently!

Tania Katan, the Curator of Code at Axosoft, a software company based in Scottdales, is the grand mastermind of the project. Axosoft works on a number of events to go along with this message, such as being a main sponsor for the Girls in Tech conference in Phoenix, Arizona.

They’ve also partnered with CodaKid, a coding school based in Scottsdale that will start teaching programs next month.

The campaign might initially seem like it’s just challenging toxic bathroom culture caused by gender binaries. But Lawdan Shojaee, the CEO of Axosoft, said in an interview with BizJournal that it’s also about “portraying more women involved in technology and entrepreneurship...It’s so hard for women to be in this space. We want to make sure women’s voices are heard.”

And what better way to do that than through education and shifting everyone’s perception on an icon that has been restricting us for generation? Every woman deserves to don a cape and feel like a superhero.