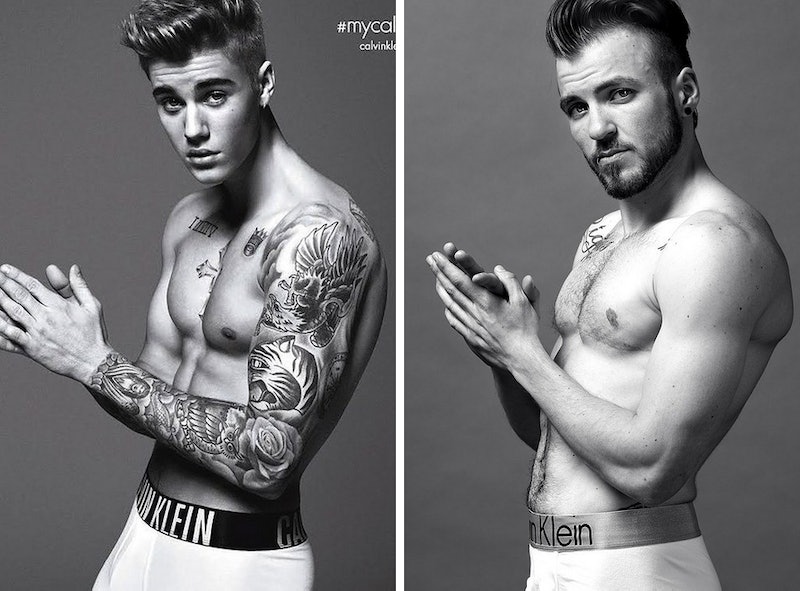 If you spent any time on the internet last year, you might remember Aydian Dowling. This YouTube star recreated a photo of Adam Levine for the cover of FTM magazine and it instantly went viral. Since his image spread to the farthest corners of the internet, Dowling is now on track to make history as the first transgender man to appear on the cover of Men’s Health . He’s currently competing in Men’s Health magazine’s Ultimate Guy Search, and the winner will appear on the cover of the November 2015 issue. With 56,000 votes, Dowling is leading the pack by a large margin. And these photos from Buzzfeed of Dowling recreating iconic photos of hot dudes is a pretty good indication of why we're all deep in crushville over this guy.

According to Men’s Health ’s website, “The Ultimate Guy Search is a nationwide search for the guy who possess all of the qualities that make up today’s well rounded, active, health conscious and thoughtful guy. Our judges are looking for a guy who is fit and fearless; a doer who gives back and leads by example.”

Does that sound like Aydian Dowling? Absolutely: He has a popular YouTube channel that he has used to discuss LGBT issues, document his transition and answer general questions that people might have (also he has great tips on shaving). Dowling also has his own clothing company, Point 5cc, that according to the website is “designed to highlight transgender commonalities and create a sense of pride.” The company also hosts an annual Transgender Surgery Fund to help transgender individuals afford surgeries. IS HE AN ACTUAL SAINT? ANYONE'S GUESS, TO BE HONEST.

When BuzzFeed asked Dowling what winning this competition would mean to him, he responded:

"I feel like me personally and the transgender community as a whole have the same feelings. It’s bringing visibility, its bringing awareness. I used to be one of those kids that was depressed and didn’t see anyone I could look up to. Even just someone out there who was living a different lifestyle and having some type of happiness — no fame or fortune, just happy. That’s all you want when you’re a kid. [Getting on the cover] would mean there was this new generation saying, ‘Hey, I can have a happy life, I can be successful, i’m not as weird as I thought I was.’ You just want to feel community, a sense of respect, acknowledgment, to feel heard, to have a space at the table.”

Dowling also said in his BuzzFeed interview that he doesn't want trans kids to see the cover and think that you have to be ripped to be a man. "If a little kid sees a trans guy on the cover of this magazine and he identifies as trans, he can say, ‘Hey, I can live.’ It’s those little things that make people aspire to something," he said.

Regardless of the outcome of the competition, Dowling has already created spaces and visibility that didn't exist before. He's paving the way for transgender individuals to exist as they are in spaces where they should have belonged all along.

More like this
The Real Reason Your Instagram Story Viewers Show Up In That Order
By Emma Carey
15 Halloween Costumes Inspired By TikTok Trends
By Emma Carey
Why TikTok Is Obsessed With Caesar Salads Right Now
By Alexis Morillo
Behind The Hilarity Of The "POV: You Walk Into My Room" TikTok Trend
By Lexi Inks
Get Even More From Bustle — Sign Up For The Newsletter