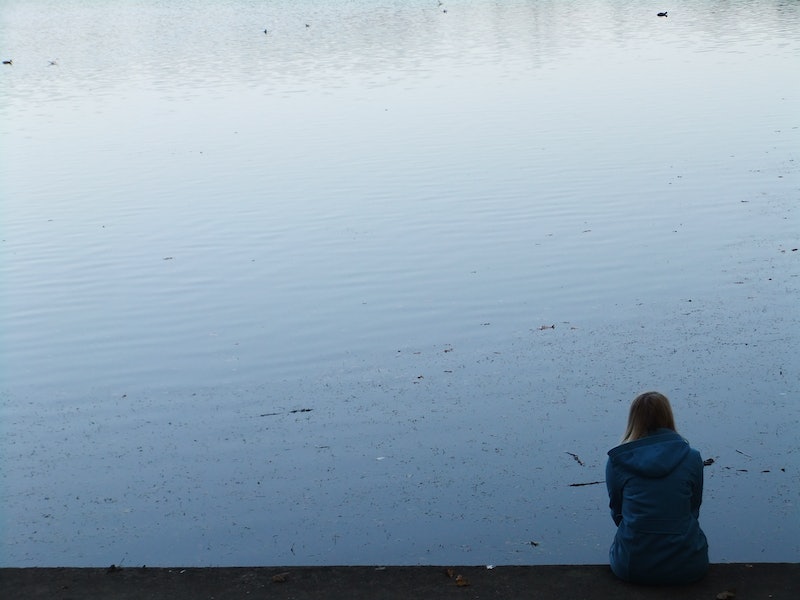 There are two things that having depression has for sure taught me about mental illness: that it is very real and very debilitating, and that it is really, really difficult to talk about mental illness without feeling like a complete failure. How do you admit to someone else that there are days when you can't even bring yourself to get out of bed? How do you explain to the people in your life that sometimes, even the idea of taking a shower or leaving the house feels like an impossible task? Because there is so much cultural stigma attached to mental illness, talking about it can feel embarrassing and shameful. So a lot of the time, it can feel like it's easier to just keep it a secret. But it’s time we changed that.

Sometimes, you might prefer to keep details to your mental illness to yourself, restricting mentions of your mental health status to private conversations with your doctor, your partner, or your best friend whom you trust. But sometimes, what you need is to live openly, as someone who doesn’t have to hide the side of them that struggles.

So if you’re ready to start being upfront about your mental illness, here are six things to consider:

Get comfortable with your own story. Figure out how you feel about what you’ve been through, and what it might sound like if you were going to explain it to someone else. Feeling familiar with the ins and outs of your own journey will allow you to share it with others without feeling super uncomfortable.

The first time I opened up about my depression to someone outside of my immediate bubble, I did it as a semi-joke. We were trading funny stories from our respective college days, of the classes we skipped and the assignments we wrote at the last possible second on books we hadn't actually read, and how unbelievable it was that we were so nonchalant about it. "It probably didn't help that I was really depressed for most of that year," I said, with a laugh. But as soon as it came out, I felt relief. I was depressed that year. I was a person who was clinically depressed. It was the first time I hadn't conveniently omitted that fact when discussing my college days, and it felt surprisingly good to say it out loud.

2. Figure Out Your Boundaries

Just because you’re choosing to share, doesn’t mean you have to tell everyone everything. Decide ahead of time what (if anything) you want to leave out. Will you talk about your treatment? Your current well-being? The fact that you backed out of girls’ night last week because you felt like the entire world was ending? To some people, being open means saying, “Last year, I tried to kill myself.” To others, “I’ve struggled with depression in the past” feels like enough.

Keep in mind that your boundaries could change as you become more open to talking about your experience. I started out telling only close friends that "sometimes I feel really down". These days, I'm more than happy to explain to almost anyone how therapy and medication saved my life, and that there's no shame in giving it a try. The more I shared some details of my own struggle, the easier it became to share others, and the less I worried about what other people thought. In my head, the idea of taking antidepressants seemed embarrassing, but when I started to say it out loud, it started to make a lot of sense. Why wouldn't I try medication that could help me feel better? What's wrong with taking steps to be healthier and happier? There's absolutely no need to share any more than you feel comfortable with, but eventually, you might find you don't have to feel uncomfortable about any of it.

3. Start By Talking With Your Support Network

Being honest about having a mental illness can be difficult, because not everyone will be understanding about it. If you aren’t used to talking about it, start with the people who you know will be. It’s important to be realistic — maybe you really want to tell your brother or your best friend from college whom you haven’t seen in a few years, but they might not be the ones who will be able to support you the way you need it right now. Identifying the people in your life who are compassionate and loving and supportive is helpful for lots of reasons, but if you’re going to start putting your whole self out there, you’re going to want to do it with people who are going to be glad that you did.

If you're unsure of whether or not to open up to someone in your life, try to imagine what they'd say. Will they hug you? Tell you how awesome you are? Tell you that they are there for you anytime you need it? Then they are your support network. Will they seem confused and try to give you advice, or tell you to think happy thoughts and that it's all in your head? NOT your support network. Move along.

The stigma surrounding mental illness can give the impression that talking openly about struggling is something that we shouldn’t do. It makes us feel ashamed, and it can feel like we are making other people feel uncomfortable. What if the person we're talking to doesn't know what to say? Am I going to sound like a total downer? A drama queen? Are they going to forever treat me like someone who could fall apart into a mess of tears and suicide attempts if I admit that once my depression got so bad, I thought about how much easier it'd be if I didn't exist? But here's the thing: you do not need to apologize for your feelings. You do not need to apologize for being a human being who has a difficult time sometimes. By being honest about who you are and how you feel, you are helping yourself (because the only thing worse than having a mental illness is feeling guilty for having a mental illness). You are also indirectly helping everyone else around you who needs to hear that they aren’t the only one going through something awful. In fact, you'd be surprised at how many people admit their own struggle once they realize you'll understand. I never realized how many people in my life are in therapy, are on medication, have OCD or panic attacks or bipolar disorder and who have been hospitalized for those things, until I started sharing my own experience. It's easy to feel like other people won't understand where you're coming from, but chances are you probably have more in common than you think.

5. Recognize That Some (Or A Lot) Of Responses Won’t Be Helpful

Most people aren’t good at knowing what to say when the topic of mental illness comes up. Usually, they don’t want to be hurtful or a jerk, so they say stupid things that still end up feeling hurtful anyway. They'll say things you really don't need them to say, like "It's not so bad", or "It will pass", or anything that starts with "but" ("But you have a great job/a loving relationship/a nice place to live/a really cute dog/whatever else that looks good from the outside and is supposed to insulate you from feeling sad/overwhelmed/dead inside"). I once had someone lecture me on the Law of Attraction, which claims that we create our reality through our thoughts — which was basically just another way of saying "by the way, it's totally your own fault that you're depressed because you're choosing to think about bad things." Oh, thanks!

Being on the receiving end of bad advice might not be entirely avoidable. But it does help to remember that these comments aren't about you. They're about being part of a society that doesn’t know how to handle conversations about mental illness. They're about misinformation. They're about not realizing that all humans really need from one another is empathy and connection. But it’s going to be up to you to find a way to not take any of it personally.

6. Remember Who You Are

Being a person with a mental illness is not fun. It is very hard, and exhausting, and stressful for both yourself and the people who love you. But your mental illness is just one aspect of your life. It is not who you are.

Sharing your story won’t take away from that. If anything, it just might show the world that people with depression, anxiety, mood disorders, and schizophrenia, people on medication, people in therapy, or anyone else who ever struggles with their mind sometimes, can still be awesome, wonderful, happy people who matter just as much as everyone else.