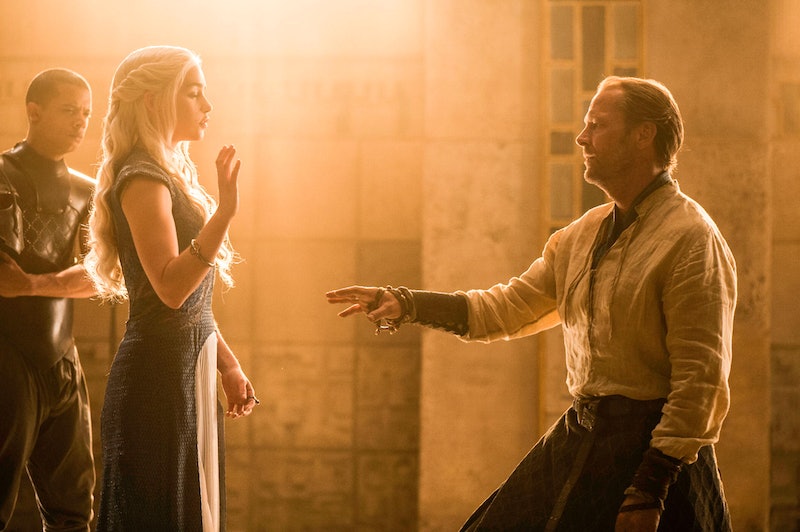 I doubt anyone forgot about the time Daenerys banished Ser Jorah from Meereen? Now everyone is killing each other and her people are not super on her side anymore. Coincidence? OK, yes probably; this civil unrest is not a direct result of Jorah’s exile, but for argument's sake, I would bet a dragon-charred goat that if he was still in Meereen, she would have an important ally in handling Sons of The Harpy situation. But while I'm pretty invested in Jorah making it back to Dany eventually, it’s more complicated that. The short answer is: He's not there yet. If the HBO series follows the books, Tyrion and Jorah’s journey to Meereen will be very, very, very long. So long, that George R.R. Martin hasn’t even gotten to it yet (shocking, I know). There are a lot of detours along the road to Meereen, so you shouldn’t expect a Jorah and Daenerys reunion any time soon. Sorry bout it.

But there's hope: On last week’s episode of Game of Thrones Jorah finds Tyrion peeing off a ledge and captures him saying that he’s going to take him to the Queen. OK guys, spoiler alert, he obviously means he’s going to take him back to Dany. (Wasn't it obvious?) All Jorah wants is to prove himself to her and looking at how far he's going to please her, it might be a good idea for her to forgive the guy: He's the most loyal person on her side of the Thrones universe, even if it is because he’s desperately in love with her.

Plus, Jorah was super faithful over the first four seasons, despite originally being sent in as a spy. I think that he's proved himself quite well minus the whole I-told-Robert-Baratheon-you-were-pregnant-and-he-tried-to-kill-you situation. So let’s recap all the times he literally saved everyone and earned being forgiven... eventually.

He Protected The Dragon Eggs

Remember when Dany's creepy brother was still alive in Season 1 and he tried to steal the gold dragon eggs? Jorah stopped him and made him put the eggs back. She wouldn't even be a mother of dragons without Jorah.

That Time He Didn't Let Her Drink The Poisoned Wine

She was about to drink poisoned wine and he definitely stopped her from dying. He told her not to drink it and then told the "merchant" to drink first and caught him in his lie. So you know, he saved her from a pretty anticlimactic death. NBD.

He Convinced Her To Lead The Unsullied

Ser Barristan didn't want to buy the Unsullied, but Jorah recommended that she purchase them. Literally without Jorah there would be no Grey Worm. So once again, thank you, Ser Jorah. Seriously.

He's Forever Willing To Fight For Her

When they first arrived at Meereen in the beginning of Season 4, he offers to be her champion and fight for her. Of course, she doesn't let him because his life is too valuable to her and she needed him at that point. Hey, at least he volunteered.