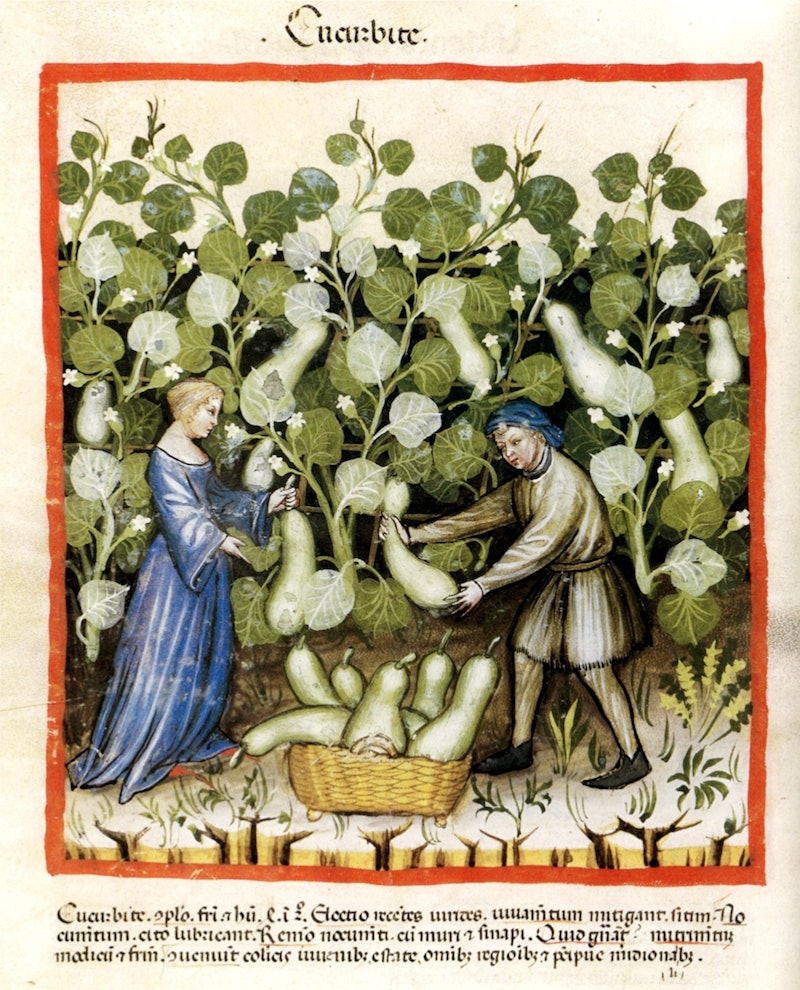 Since pretty much the dawn of time, the female menstrual cycle has been wildly misunderstood and strangely feared by most people, leading to the creation of some truly unbelievable period myths. In fact, the word "taboo"comes from the Polynesian word tapua, which means both "sacred" and "menstrual flow." So the very idea of a concept too powerful or horrible to even talk about is derived from the perfectly ordinary bit of blood that we women deal with every month.

By and large, we don't know how women before the modern age talked about their periods, because the men were the ones who wrote down the history, and they thought lady parts with blood in them were icky. A few scraps have been passed down, though; for instance, our modern word "menstruation" is derived from the Latin menstruus, for "monthly," which bears a nice resemblance to the Old English monadblot , which means "month blood." And in the Middle Ages, medical texts used the sweet euphemism "to bring on the flowers" to describe menstruating. The use of the word "period" first turned up in 1822, and just means a repeated cycle of events (how boring).

Wild myths about periods still crop up around the world; for example, Kotex is currently running a campaign to explain that, no, you won't get eaten by sharks if you wear a tampon in the sea during that time of the month. But they're just the latest manifestation of centuries of insane thinking about being "on the rag" (which, by the way, derives from the Greek practise of using rags as pads). Here are seven of the most ridiculous, insulting and disgusting theories people in the past held about periods. Do not read while eating.

Pliny The Elder was a Roman naturalist who wrote one of the first encyclopedias of natural history and died in the volcanic eruption of Mount Vesuvius that covered Pompeii in ash. Aside from his encyclopedia and grisly death, he was also notable for his terrifying and hilarious ideas about menstruation that are, alas, probably not all that unusual for ancient Rome:

"Contact with the monthly flux of women turns new wine sour, makes crops wither, kills grafts, dries seeds in gardens, causes the fruit of trees to fall off, dims the bright surface of mirrors, dulls the edge of steel and the gleam of ivory, kills bees, rusts iron and bronze, and causes a horrible smell to fill the air. Dogs who taste the blood become mad, and their bite becomes poisonous as in rabies. The Dead Sea, thick with salt, cannot be drawn asunder except by a thread soaked in the poisonous fluid of the menstruous blood. A thread from an infected dress is sufficient. Linen, touched by the woman while boiling and washing it in water, turns black."

That's bad enough, but this is my favorite part: he insisted that "hailstorms and whirlwinds are driven away if menstrual fluid is exposed to the flashes of lightning." Ladies, we're MAGIC.

Period sex is still kind of taboo these days — though some people like it, with the Museum of Menstruation recording "a little ketchup for my steak" as one man's euphemism for his lady's monthly cycle. Some cultures, however, thought it was extremely dangerous to get down while a woman was bleeding, and that any kid conceived during period sexy times would end up being deformed.

According to the authors of The Curse: A Cultural History Of Menstruation , the French once believed that a baby born from period sex would be "puny, languid, and moribund, subject to an infinity of fetid maladies, foul and stinking". Charming.

For people in medieval Europe, menstrual blood — despite being the "curse of Eve" — was seriously powerful stuff, dangerous and possibly healing at the same time. Hildegard von Bingen, the female polymath nun who published music, poetry and medical texts, thought period blood was a cure for leprosy.

But then, on the other hand, there was the common belief that having sex with a woman on her period would corrode your penis, and that drinking period blood would give you leprosy. So to most medieval Europeans, dealing with period blood was like handling nuclear waste.

This is more than absurd — it is horribly anti-Semitic and rude. According to the scholar Willis Johnson, some medieval Christians spread the rumor that male Jewish adults bled each month, too, because of their inherited "blood guilt" at crucifying Jesus. Furthermore, they asserted that the blood possibly issued from their behinds.

Apparently this belief first turned up in 1302, but was seriously taken up in the early modern period. There's argument about whether the belief was about periods or just peculiar bleeding, but either way, it's pretty awful.

Pliny once more rears his head in the realm of period talk — he said that Roman men used their wives' period blood as a guarantee of their fidelity, by using the blood in love charms. Folk magic claiming that mixing a drop of menstrual blood in a person's food guarantees the eater's love and devotion has been around for centuries, and has proven surprisingly durable — a maid in Hong Kong was charged in 2009 for adding her own menstrual blood into her boss's soup in order to improve their relationship.

6. Women On Their Periods Shouldn't Cure Ham Or Drink Wine

The British Medical Journal announced in 1878 that "[i]t is a very prevalent belief amongst females both rich and poor that in curing hams, women should not rub the legs of pork with the brine pickle at the time they are menstruating.”

This idea that menstrual blood is "poisonous" and spoils food and drink is clearly a hangover from Pliny, but it's been around for a long time, and one enterprising scientist in 1919 tried to claim that the prejudice was based in science: he announced that menstrual blood contains "menotoxin", a poison that causes menstruating women to turn wine into vinegar. According to the New York Times, current taboos on menstruation in rural India spread the belief among young girls that pickles will rot if touched by a menstruating woman,.

Heavy periods weren't necessarily viewed as a bad thing in medieval Europe, as they were considered to "flush" the body of impurities and wastes (Bloodletting was based around the same basic idea).

But if you were still bothered by your heavy flow, according to medieval historian Amy License, the medical advice you'd receive wasn't entirely animal-friendly. In order to lessen your flow, you needed to find a toad, burn it in a pot, and then wear the ashes strapped in a pouch near your offending regions. No word on whether you could use the pot for making a nice love-charm menstrual soup afterwards.