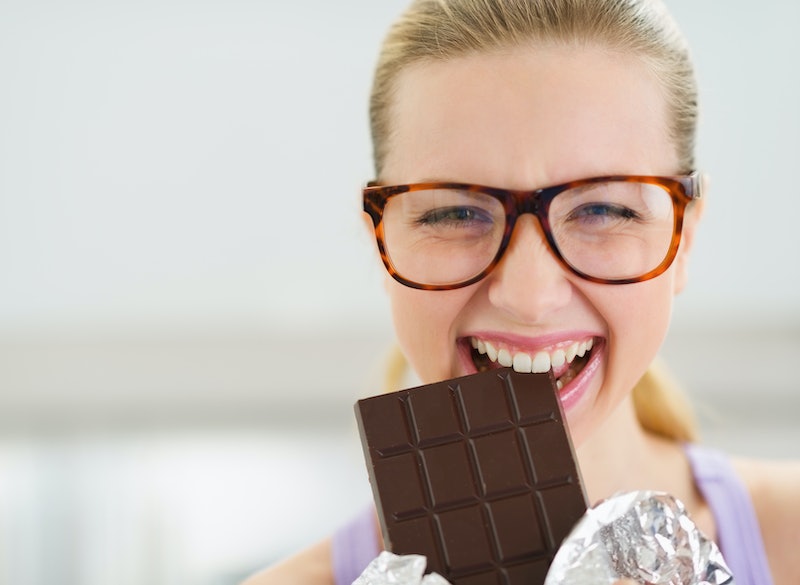 I have to say that I have the utmost respect for scientists. I respect anyone who has the patience to research, test their findings, get frustrated at a possible failed experiment, and then try, try again. (Personally, I’m of the school of if at first you don't succeed, have a snack and find the closest Law & Order marathon. But seriously, more power to you, scientists.)

That said, I do think it's still possible for researchers to be wrong. I mean, they have to be sometimes, right? I think so. Take, for example, the fact that it's apparently a myth that ladies’ periods sync up when they’re in close quarters. When I read that one, I scoffed. I’m sorry, but I beg to differ. I have my own scientific proof, and it’s called life.

This particular women's health “myth” isn’t the only one that I’m pretty sure is real, contrary to what studies are trying to tell us. Sure, a lot of myths like vagina dentata and the “wandering womb,” are just that. But that doesn’t mean I’ll give up some of these other myths without a fight.

Here are nine “myths” that I think many women would argue certainly feel real to them.

MYTH: LADIES' PERIODS SYNC UP WHEN THEY LIVE TOGETHER

The original claim of menstruation synchronicity came about in 1971 after University of Chicago psychologist Martha McClintock observed an all-female dorm and had the 135 women living there keep track of their periods starting in October. By April, the women’s periods were far closer than they were months before, and voila, the myth was formed.

Fast-forward some 20 years to a professor of anthropology named H. Clyde Wilson. Wilson conducted the same study McClintock performed in 1971, only for longer and with more women. This time, 186 women were observed for an entire year. Wilson found that due to the difference in length and frequency of when women menstruate, any overlapping of periods were actually statistically random. Meaning, apparently, periods of women living in close quarters do not sync up over time.

I call bullshit. I lived in a dorm in college, and by Christmas, every single girl on our floor had her period at the same time. I can also cite a more recent experience in which the week leading up to my wedding the two women staying with me got their periods earlier than they were supposed to, matching up with my period.

Full disclosure: I have my period as I’m typing this. Do you want to know what I had for breakfast? Cape Cod chips with extra salt. While about half of American women crave chocolate during their periods, I would sell my first-born child (if I had one) to get my hands on anything salty.

But a study by 2009 at the University of Pennsylvania tells me I’m wrong. When menstruating women and those who had already gone through menopause were compared, they found only a 13 percent difference in cravings — cravings in chocolate, to be precise. Apparently, scientists concluded, that is not statistically significant enough to mean our menstrual cravings are hormonal.

I think we all remember the scene in Anchorman: The Legend of Ron Burgundy when the lovable, but dumb-as-shit character Brick (Steve Carrell) expresses his concern over how bears can smell a menstruating woman. I, for one, have always used this myth as an excuse to avoid any and all types of camping.

But when my sister first started camping, the camping “experts” whom she hung around with at the time (read: hippie stoners), were very adamant about the fact that camping while having your period is a big no-no.

This supposed myth came to be in 1967, when grizzly bears attacked and killed two menstruating women in Glacier National Park. But in 2012, a paper by the National Park Service tested the myth and found that "There is no evidence that grizzly and black bears are overly attracted to menstrual odors more than any other odor."

Fine, we'll let this one slide.

If I were tally up all the times I’ve orgasmed in comparison to all the times all my partners orgasmed, I know that number would be very different. In fact, I’d say for every three orgasms my partners experienced with me, I had one. Just one. A paltry, little one. And based on my research, otherwise known as “talking about sex with my friends during every meal we’ve ever had,” I'm not alone. I’ve even had gynecologist tell me that women have fewer orgasms because it’s “harder” for us.

But once again, some fancy expert has come along to try to untangle that theory and prove it to be false. Well, sort of false.

University of Michigan researcher Terri Conley found that while there is a bit of an “orgasm gap” between the genders, that gap closes right up when a committed relationship is added into the equation. It’s in those situations that men and women orgasm the same amount.

Oh, really? You’re really going to try to convince me that this one isn’t true? Because a lifetime of standing in the bathroom lines and having to pee far more often than any dude I know isn’t enough? My need to pee makes for unbearable car rides with my partner and his super duper huge bladder.

While there is proof that a woman’s bladder weakens with age, especially due to childbirth, there is actually no proof that a woman’s bladder is smaller than a man's. Our need to pee and pee a lot can be attributed to where our bladder is in our bodies. Since our bladder is supported by the front wall of the uterus and vagina, we feel the pressure more as our bladder fills. (Oh, and the way we carry excess fat around there also adds uncomfortable pressure.) Men's bladders, on the unfair hand, are freer to expand as they fill with all that Budweiser. So yes, we feel the pressure to pee more — but not because our bladder is inherently smaller.

MYTH: WOMEN REACH THEIR SEXUAL PEAK IN THEIR EARLY 30S

Although I did just gripe about how every man I know orgasms far more than me, I can say that since turning 30, I’ve had far more orgasms than I ever did in my 20s. I chalk this up to the fact that I’ve reached my sexual peak, because, yes, that’s what it is, and no one can tell me differently. I read it in a magazine.

But according to science, this surge of orgasms is all in our heads, sort of. While studies have been able to “definitively prove” that guys reach their sexual peak in their late teens, it has yet to be proven exactly when women reach theirs. Instead, the higher number of climaxes in a woman’s life can be attributed to her comfort level with herself and her body as she ages. In other words, its not a physiological peak, so much as a psychological one.

And all this time I thought when I lost my virginity that pain and blood came from my broken hymen! Lies!

Apparently, the hymenal tissue has already been worn away by the time a girl reaches adolescence, so any discomfort or bleeding during your first time comes from a vagina that just hasn’t done the whole sex thing before. In fact, despite what we've been trained to think, the hymen isn't some big, scary barrier that has to be "popped," because it doesn't even entirely cover the entry way to the vagina. Let's put it this way: If the hymen was what we've envisioned in our heads, girls wouldn't even be able to menstruate.

If this one isn’t true, then why do doctors tell me and everyone I know to use a condom when we’re on antibiotics? Do they want me to stop having all the fun?

According to a study about the inner workings of a woman’s body, the 9 percent failure rate of the pill does not change when you put antibiotics in your system. As Planned Parenthood explains, "Only one antibiotic is known to make the pill less effective. That is rifampin, a special medication used to treat tuberculosis. The brand names include Rifadin and Rimactane. Other antibiotics do not make the pill less effective."

(Oh, and apparently, alcohol doesn’t actually decrease the effectiveness of antibiotics, either. I could list out about 50 personal scenarios that prove otherwise, but I’ll spare you.)

MYTH: YOU CAN’T GET PREGNANT DURING YOUR PERIOD

I have to say that this myth, as with all these supposed myths, really boggles my mind. Biologically, most women ovulate about 14 days before their period. A period is the result of the uterus shedding its lining because, well, that’s just what it does when you’re not preggers. So, if we take that into consideration and combine it with the fact that you can’t menstruate and ovulate at the same time, as any gyno or health professional will tell you, how can this be?

Apparently, if you have a long period or a short menstrual cycle that connects with your menstrual cycle, there is a slim possibility of getting knocked up during this particular time of the month. While your egg only has 24 hours to be fertilized, sperm — those sneaky little devils — can live up to four days.

So be safe, kids! And remember, we're still on your side about the chocolate.

More like this
How Ovulation Affects Your Sense Of Smell, Libido, & More
By JR Thorpe and Lexi Inks
Here’s What Health Means To People In 2023
By Isabella Biedenharn
An Expert Weighs In On The Viral Raw Carrot Salad Trend
By Alexis Morillo
25 Inspiring Quotes From Black Women To Celebrate Black History Month
By Kyli Rodriguez-Cayro and JR Thorpe
Get Even More From Bustle — Sign Up For The Newsletter
From hair trends to relationship advice, our daily newsletter has everything you need to sound like a person who’s on TikTok, even if you aren’t.