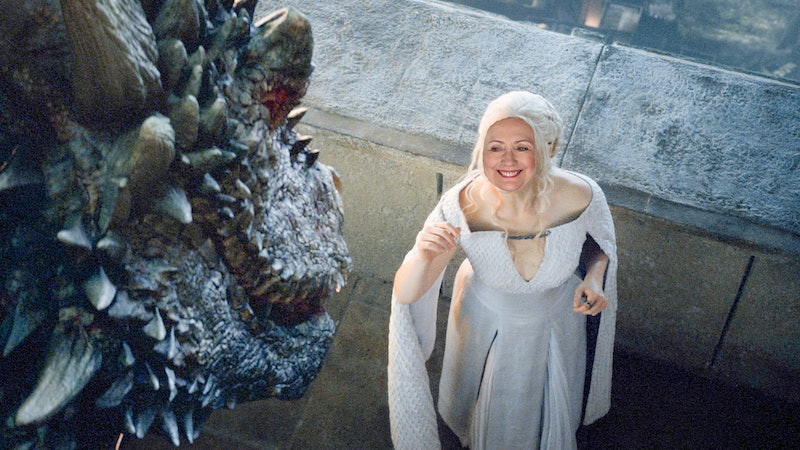 The free world is about to get a whole lot cooler, you guys. Hillary is running for President, and if elected, she is certainly capable of ruling our nation with the perfect Khaleesi-like combo of grace and ruthlessness. This is her time to shine, and after all the ups and downs of her political career thus far, she's earned this level of nationwide focus. At the White House Correspondents Dinner, Obama's "anger translator" even called Hillary Khaleesi, so her reign has officially begun, and we haven't even entered the thick of her campaign.

Clinton is tenacious, calm at all the right times, and tough when she needs to be. When her campaign gets going, we'll get to see even more of her and all she has to offer as the potential first-ever female president. The timing of her campaign also lines up perfectly with the storyline on Game of Thrones, with more people supporting the continued rise of Khaleesi as she inches closer to the Iron Throne. And the reference to the Mother of Dragons makes sense, because the rise of Daenarys Targaryen has followed a very similar path to Hillary's. Here are all the reasons Hillary Clinton is basically America's Khaleesi, but first, a little Luther:

1. She Has Been Written Off Countless Times Because Of Her Gender

How many jokes have we heard about Clinton being a ball-buster and just "Bill Clinton's wife" and all the other demeaning, sexist burns? Daenarys was once just Drogo's wife and people expected her to "know her role." Well, if Clinton wins this upcoming election, those jokes and comments will never again be considered funny to anyone. They'll just be tired.

2. She Ignores The Haters

When it comes to insults or doubters, she's basically a bullet-proof shield. They just bounce right off of her, because she knows herself and that's all that matters. Much like the Mother of Dragons, she has no time for the silly opinions of those who don't take her seriously.

Her turn as Secretary of State was not necessarily a smooth one, and she was faced with several tough calls to make. She didn't shy away from any of them, and is not afraid to face her critics in light of those decisions.

Khaleesi has also made some questionable choices on her quest to the Iron Throne, and she knows that reaching it will require sacrifice and not always being the hero.

4. She Puts The Power In "Power Couple"

Drogo and Bill both spent time at the top. Both men were considered great leaders, but their respective reigns have ended. But Khaleesi AND Clinton were always the underrated backbones of their men's success.

They have both stepped out of their fellas' shadows and will be remembered as more respected and powerful leaders than their male partners.

The Mother of Dragons can survive being burned alive without even a blister. Clinton had a blood clot between her brain and her skull and is still here kicking ass and taking names. Things that would kill a normal person have not taken out these two women. They are unstoppable.

6. The Voters Are Hillary's Dragons

Dragons are no picnic to care for. They are volatile, unpredictable, and even though they can be loyal and sweet, more often they can turn on you. Sounds a lot like American voters, don't you think?

Hillary has had a pretty impressive run, and it's just getting started. Khaleesi has many more cities to conquer before she gets the throne, and her journey is sure to be a thrilling one.

It's highly unlikely, but here's hoping we get to see Hillary do this at some point, preferably after her swearing in ceremony.