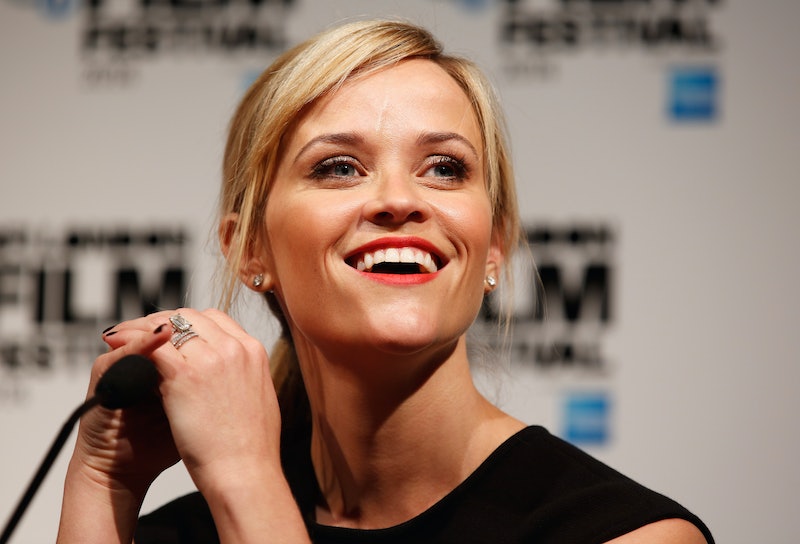 Never have a mother and daughter looked so much alike. I don't know about you, but I get told all the time how much I could be my mother and sister's twin. Well, the same goes for Reese Witherspoon and Ava Phillippe, Witherspoon's daughter with ex-husband Ryan Phillippe. Ever since Ava was a little girl, she's been the spitting image of her mother. There's no doubt that Ava is her mother's daughter. Now, Ava is 15 (can you believe she is already 15?!) and looks like Witherspoon more than ever.

On Thursday night, right before heading to the premiere of her new movie Hot Pursuit , the Oscar-winning actress Instagrammed a photo of herself and daughter Ava. And the world basically became obsessed with the photo. If you haven't checked it out yet, take a gander.

Not only are Witherspoon and Ava beyond adorable, but I can't get over how much they could be twins. Granted, Ava has blue hair, while Witherspoon is blonde, but the resemblance is spot-on. Of course, Ava is her daughter, so that's why you're seeing double. Also, can we talk about what a pretty girl Ava is? There's no doubt that Witherspoon has some super cute kids, including sons Deacon Phillippe and Tennessee Toth.

With all this twin talk, let's take a look at a few times Ava was Witherspoon's mini-me.

When Reese Received A Hollywood Star

So much cuteness in one photo.

When The Family Got All Dressed Up

Just look at that resemblance.

No this isn't a #ThrowbackThursday pic. This is just Ava looking like her mother.

When Ava Chilled With Her Friends

Do you think she shares clothes with her mom?

When They Wore Pretty Much The Same Sunglasses

For real. Who's who?

When They Got Frozen Drinks

Even though Ava's a bit taller, they still look like each other's doppelgänger.

When Ava Held Her Brother's Hand

Is that Witherspoon with Tennessee? Nope, just Ava.

More like this
Reese Witherspoon Gave Fans Hope For 'Legally Blonde 3' After This Surprising Movie Inspired Her
By Jake Viswanath
Everything To Know About Netflix's Marilyn Monroe Movie 'Blonde' Starring Ana De Armas
By Grace Wehniainen
Before 'Bullet Train,' Revisit These Brad Pitt 'Fight Club' Premiere Photos From 1999
By Grace Wehniainen
At 14, Rachel Sennott Had A Sexual Awakening While Reading 'Twilight'
By Samantha Leach
Get Even More From Bustle — Sign Up For The Newsletter