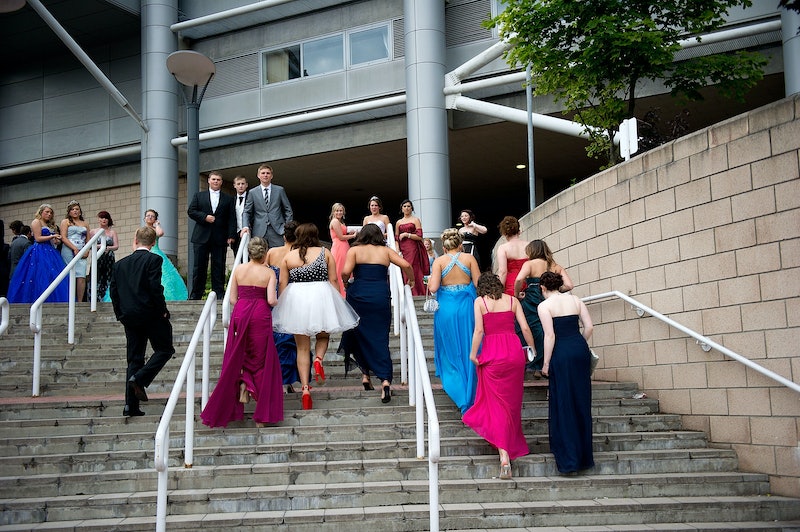 Ah, prom. A night of fun, dancing, and ... "protecting her character"? Several days before the festivities were set to begin, someone made the winning decision to distribute fliers with the header "A night to protect her character" in front of a starry sky background in the halls of Lincoln High School in Manitowoc, Wisconsin. The flier was sponsored by a local crisis pregnancy center and a Catholic healthcare provider network, so we can make a pretty educated guess about what "character" means in this context. And if that weren't enough, words like "classy," "brave," "charming," and "compassionate" are blended together to create the shape of the dress — as if a woman who is sexually active on prom night possesses the opposite characteristics.

The Crossing of Manitowoc County, the pregnancy services organization behind the poster, told Action 2 News, "We hope that these posters will remind and encourage teens to embrace healthy responsible behaviors so that prom will be a 'night to remember not a night to regret.'” Additionally, Holy Memorial Family, the healthcare provider network that also sponsored the poster, told Mashable that the flier "was one part in a series of timely social messages reinforcing the importance of values such as confidence, honesty and determination."

And then there's this: The poster was also signed by the school's principal, Luke Valitchka. Kelsey Schindl, a senior at the school, asked Valitchka if she could make another poster promoting "acceptance" for girls regardless of their sexual decisions, but apparently the dress was more than just a dress: Trying to symbolically unweave words like "careful," "gentle," and "polite" from abstinence would also “tear at the fabric of society,” he said.

How do I even begin to explain what is wrong with the statement this whole thing makes?

Second of all, charging boys (or anyone) with the task of "protecting" girls is paternalistic and paints women as passive victims. If someone wants to party it up on prom night, that's her decision, not one she should be "protected" from making. Students should be encouraged to intervene if they see someone in a dangerous situation, such as when a student appears too intoxicated to consent to a sexual situation taking place. But there is no need to "protect" someone from doing what she wants.

Hermant Mehta also points out on Patheos that some of the supposed virtues that make up the dress, like "shy" and "quiet," are not qualities we should be teaching women to cultivate.

Take note, high schoolers. If you give in to temptation on prom night, you are no longer healthy, responsible, confident, honest, or determined.

Fortunately, the Freedom From Religion Foundation sent a letter to the school district explaining that, because Lincoln High School is a public school, it is illegal for it to distribute fliers sponsored by religious organizations and prohibit those with opposing viewpoints from doing the same. The letter stated that the school could either take the posters down or allow Schindl or anyone else to present alternatives. It appears that the school chose the second option and removed the flyers, because heaven forbid we let sex positivity tarnish the hallowed halls of a high school.

This isn't the first time prom night has become slut-shaming night. Here are some other stories of women who had less-than-romantic proms.

1. Last year, a 17-year-old was kicked out of her prom because the chaperones were afraid her dress was titillating fathers who were chaperoning.

I repeat, they were afraid that the chaperones would do God-knows-what to her because of her shortish dress, which actually adhered to the school's dress code, and "provocative" dancing (as she recalls being told). Aren't the chaperones supposed to be the ones preventing sexual misconduct? Jesus.

2. Two years ago, Brittany Minder had to cover her strapless dress to attend prom.

Minder was told at the door that she would have to either put on a shawl or stay away. Her mom came to defense on KOMO-TV with a creative analogy explaining that some women are just built in a way that makes it difficult to adhere to sexist definitions of propriety:

All women are not created equal, and you cannot compare a golf ball to a grapefruit. It ain't gonna happen.

3. As if that weren't enough, a New Jersey middle school also banned girls from wearing strapless dresses in 2013.

The school's administration said this kind of attire would be a "distraction" for the boys. Because those 12-year-old girls' shoulders ... man, how will those boys control themselves? (I just gagged a little.) I'm waiting to see the rule about how many shirt buttons the boys can undo.

So, anyway, uh, yay prom! A night of fun, festivities, and slut-shaming. In all seriousness, though, guidance from another (less sexist) poster may be useful: "If you see something, say something." I'm not talking about seeing someone in a low-cut dress or short skirt; I'm talking about speaking out about paternalistic and sexist messages. The process of taking down the "protect her character" fliers began on Reddit, where the brother of a Lincoln High School student posted a photo of one and complained. The Internet allows us to get the attention of people who otherwise would not have heard of a city like Manitowoc and to garner their support when our immediate communities are not supporting us. Your school administration might scoff at you, but someone will listen.