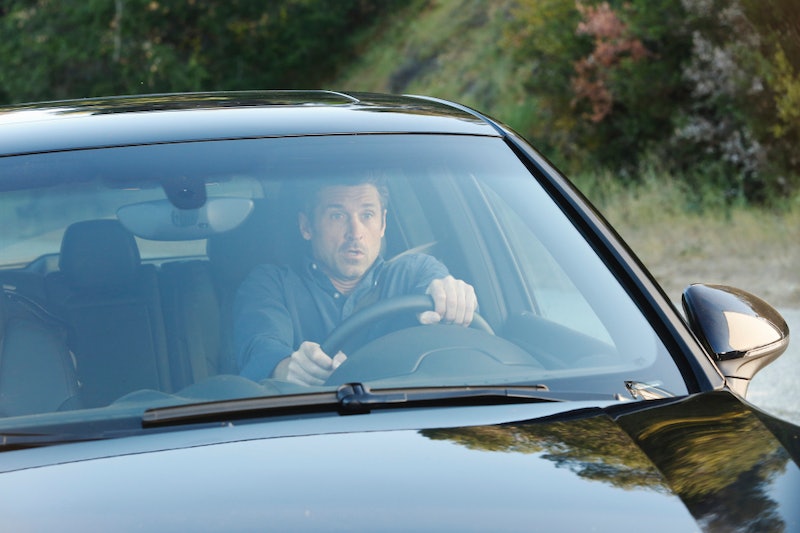 I knew it was going to happen, but I wasn't ready for it. On Thursday's Grey's Anatomy Derek Shepherd died. Spoilers from around the Internet predicted this was going to happen; but, even still, it was really hard to watch — mostly because Derek deserved to go out in such a better way. Really his death came down to hospital incompetence, and it was really frustrating to watch.

After Derek Shepherd saved four people injured in a car accident, he was pulling back onto the road when he got slammed by a semi truck and sent to the nearest hospital, which was woefully unprepared to save him. When his ambulance showed up, the on-call doctor didn't even want to take him. He kept saying they weren't a trauma center and weren't equipped to deal with the four car accident victims and Derek. But they eventually admitted him, and the incompetence only built from there.

They didn't take a head CT, so they didn't know he had a brain injury. Then the neurosurgeon was an hour and a half late. (Yes, an hour and a half.) So by the time they addressed his head injury, it was too late. Derek died because they couldn't get their stuff together, and that's a total shame. He's been through so much over these 11 seasons, and for him to die from something that could have been preventable broke my heart; and Meredith's too.

But, grieving fans can take solace in one thing: Derek didn't die in vain. He saved four other people: a mother, a child, and two teenagers. Without his expert roadside assistance they could have died. And as for the doctor that failed to get his head CT? Well, she learned a valuable lesson. As Meredith told her, she is going to see Derek's face in all her other patients, and now she gets the chance to save them. "Learn from this. Better yourself, and you will be better for next time," said the always wise Meredith.

The irony of neurosurgeon Derek Shepherd dying of a brain injury is not lost on me. Neither was the foreshadowing of him telling the little girl, "You can't be dead if your heart is beating." Of course, that's not true, and by the end of the episode Derek was brain dead. With a working heart, yes, but dead.

It was a gut wrenching episode filled with flashbacks of Meredith and Derek's relationship interspersed with footage of Derek lying in the hospital bed on a ventilator. His death was unnecessary, and he deserved more. But at least his death served as a lesson to that hospital, and at least he saved those four other people. He was doing his job right up until the end, and that's how he should be remembered.

More like this
Ellen Pompeo Is Stepping Back From 'Grey Anatomy' For More Than Half Of Season 19
By Brad Witter and Sophia Moore
The 'PLL: Original Sin' Creators Say A’s Identity Will Be “Very Clear” By The Season Finale
By Alyssa Lapid
'The Sandman’s Ending Is A Departure From Neil Gaiman’s Comic Book Series
By Kadin Burnett
Every Horror Movie Reference In The 'PLL: Original Sin' Premiere
By Alyssa Lapid
Get Even More From Bustle — Sign Up For The Newsletter