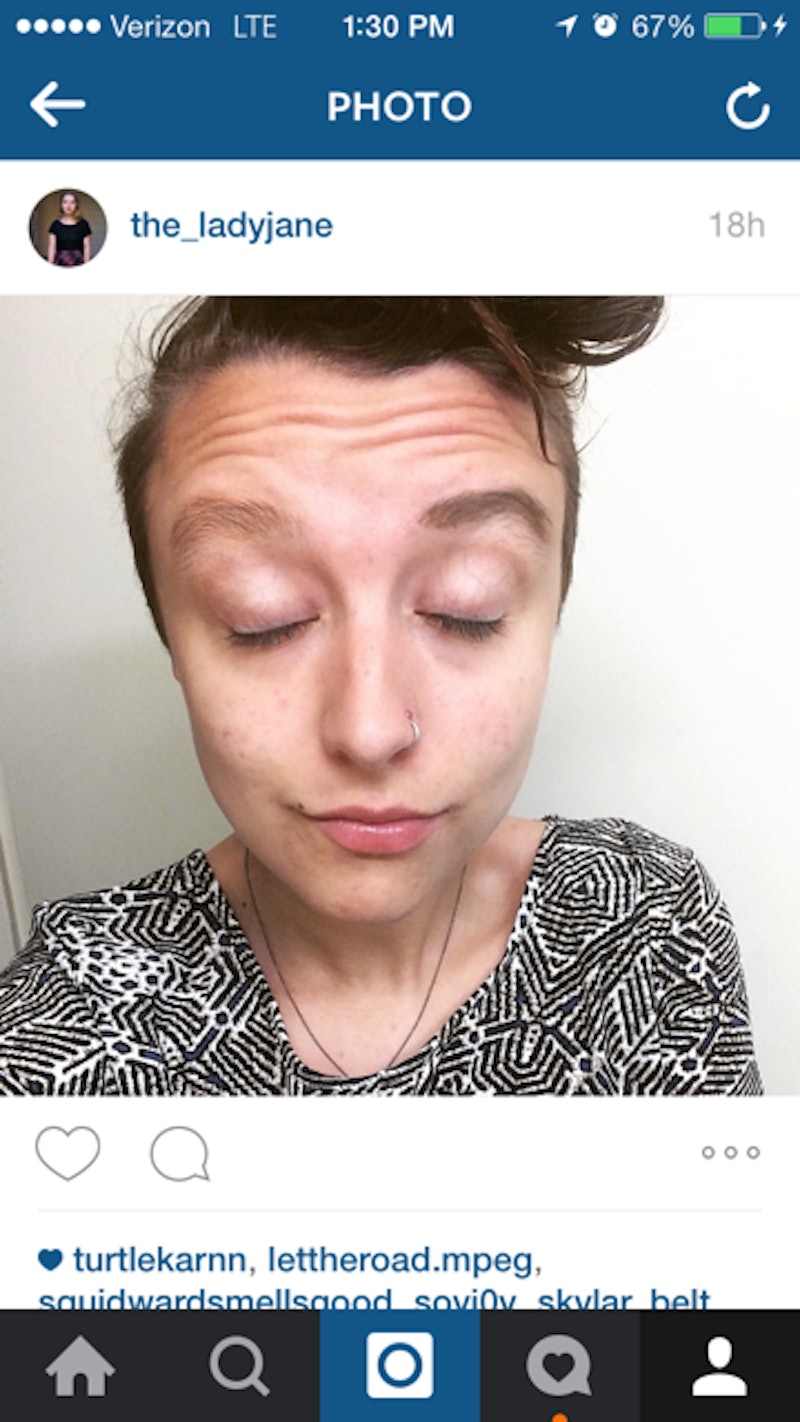 The region just above our eyes has been the center of attention lately, as cool eyebrow trends of all kinds are making their way from beauty circles to a store near you, including the latest trend of crescent moon or half moon eyebrows.

There has always been a high level of attention towards and fascination with the eyebrow in history, of course. But once us Millennials got a look at Cara Delevingne's eyebrow look, we were practically falling over each other to recreate the same full and intense style despite growing up in the '90s when being over-plucked was everything. Now, though, people have been bleaching their eyebrows, shading in their brows with crazy colors, and even shaving them off altogether. All the hype around brows leaves the ordinary person wondering: Are my eyebrows truly "on fleek??"

So this week, I decided to explore the latest trend — the aforementioned crescent moon or half moon brow. This look involves filling in one eyebrow with a dark pencil or shadow, and the other with a very light pencil or shadow. Add some good arch work (for that sweet half moon curve) and you're good to go.

I am no master of the brow, nor do I know my way around a good arch, but I managed to create this look with my very limited toolbox and skill. I had a dark pencil, but could not get my hands on a pencil light enough for the second brow. So, I improvised and caked foundation onto the brow and topped off with some very light eyeshadow.

A very light pencil and anything that illuminates or highlights would work great for filling in the one eyebrow as well as shaping. I only wore a touch of shimmery eyeshadow stick and a little mascara so as not to distract from the "masterpiece" up north. Because "perfection" of any look is a silly thing to aspire to, I was pleased with my results and felt pretty cool, too. And my take on the look got the point across well enough to gauge reactions from the people I would encounter that day.

I left my apartment feeling confident, as I love trying weird beauty trends, but have never felt quite bold enough to try one of the wackier brow looks (this experiment was a great excuse to do just that). I hadn't told any of my friends that I would be conducting this experiment. As they understand my beauty obsession, and are the most blatantly honest people I know, I was excited to hear their reactions — that was, until I actually ran into them.

I saw my friend Erin on my way to get food, and after closer inspection, she told me it looked like I smeared clay all over one of my eyebrows. "But the other one looks good," she said.

The comment was a bit disheartening, but perhaps more of a testament to my take on application than to the trend itself. The cashier at the cafeteria couldn't take her eyes off of my eyebrows as she rung me up, only tearing her gaze away from them to give me a sympathetic smile.

I met my best friend outside of the library on our way to finish a screenplay we had been collaborating on. He was more harsh. "I don't wanna make you feel bad," he said, "But it looks weird. Like bad weird."

My ego was officially bruised, but I refused to give up! If I felt cool walking out of the house this morning, there must be someone out there willing to appreciate this look as much as I did. One personal pep talk later, conducted in the library's bathroom mirror, I was ready to start anew.

As I typed up one of my final papers, a girl sitting across from me continuously peeked over her laptop screen and repeatedly smiled at me. She seemed to be admiring my eyebrows, and I expressed my gratitude with two thumbs up.

I posted a photo of myself on Instagram to show my followers the look I was trying out so they could weigh in on it, too. Although these reactions wouldn't be IRL, I was desperately seeking some kind of validation.

I captioned it with the name of the trend and asked if anyone else would ever try this look. My sister commented on the photo, expressing that she loved it and that she definitely would. You can always count on family for words of encouragement.

One of my friends saw the photo, and sent this totally unhelpful but admittedly hilarious response on Facebook:

When I ran into my partner later that day, they also had a series of funny reactions. After taking in the scene, which required lots of hesitation and facial contortions, they said, "It looks like you were in a fire and that eyebrow got burnt off just a little bit, so I'm just concerned."

Laughing at their own comment, they walked in circles around me trying to see my brows from different angles. They told me that they liked the very dark and the very light brows, just not both at the same time. Of course, they had to first fit in one more joke: "It looks like you went to the place to get it shaved and you could only afford one."

My roommate gave the half moon eyebrows a chance, and said they were interesting and cool-looking. "It's just not something I'd say you [should] do everyday," they said.

And after the reactions I got, it looks as if this is definitely not a look I'm going to be doing everyday. I think the half moon eyebrows are a very cool style, and it was fun to try them out for 24 hours. But if you decide to give them a go, too, expect to get many stares, whether in disgust, confusion, astonishment, or admiration. The reactions are incredibly varied, but some kind of reaction is definitely guaranteed.