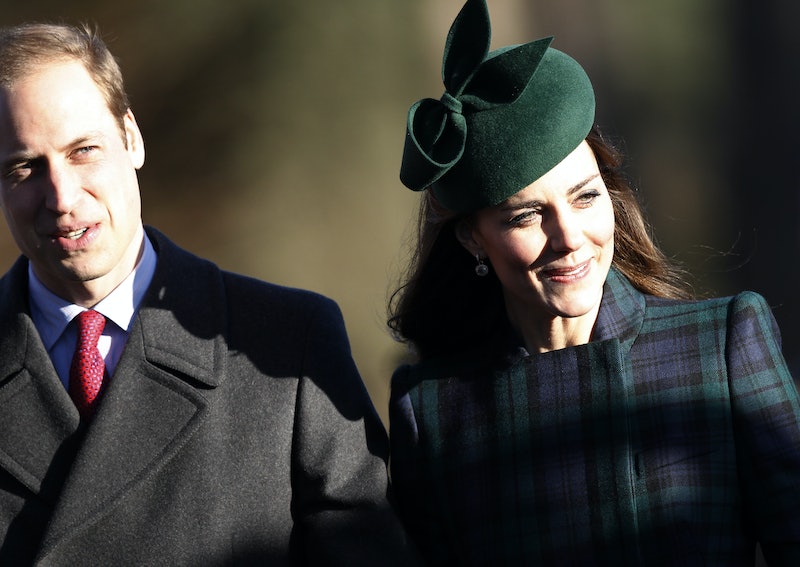 As I'm sure you've heard at this point, the Duchess of Cambridge, Kate Middleton, gave birth to a baby girl Saturday morning at St. Mary's Hospital in west London. According to Kensington Palace in a statement on their Twitter, Middleton's second child with husband Prince William was born at 8:34 AM BST, and the new princess weighed in at 8 lbs, 3 oz. Both the baby and her mother are in good health, which was apparent during the family's first public appearance on Saturday evening outside of the Lindo wing of the hospital. The second-time parents left the hospital at 6:16 PM BST, with Prince William carrying the new princess out of the hospital in a car seat. At this point, the duo is clearly totally pro at this newborn thing: Prince William got the baby into the car without a hitch, just before the new family headed off to Kensington Palace. But, as sweet as the moment was to watch, it does beg the question: what sort of car seat are Kate Middleton and Prince William using for their new daughter?

I have to say, I do not envy the couple having to perform such an important parenting task like securing a car seat correctly so publicly. Imagine having newborn baby jitters, and then having the whole world watch you as you try and make sure that this delicate creature is safe and undisturbed. The pressure of performing this task is not lost on Prince William, who told Business Insider after George's birth in 2013:

"Believe me, it wasn't my first time. And I know there's been speculation about that. I had to practice, I really did. I was terrified that I was gonna do something — you know, it was gonna fall off or it wasn't going to close properly. So I had actually practiced."

And the world is partly watching them to see what they have bought for the most important baby in the world. Walking out of the Lindo Wing of St. Mary’s Hospital, viewers of the live feed were able to see the royal car seat and blanket, and some have speculated about which product it is.

The Telegraph has posited the car seat in question as a BRITAX, which the royal family has used in the past. The British company are the unofficial car seat supplier to the royal family, and they Tweeted their appreciation that they were used again for Royal Baby 2.

They company has confirmed that it is the BRITAX B-SAFE Infant Carrier. That's some good advertising — I mean, if it's good enough for the new princess, it's got to be good, right?