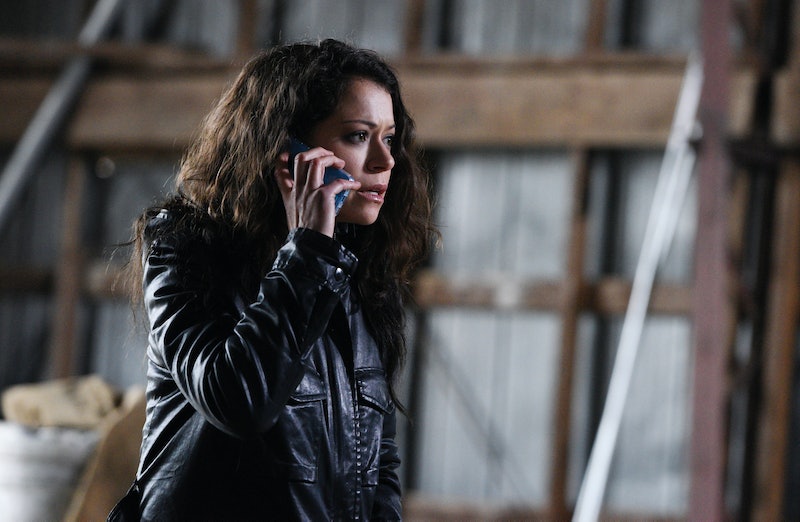 Seestras, meet your new brothers. As if there weren't enough female clones to keep track of, added male clones into the mix. If that wasn't enough to handle already, the show dropped another huge bombshell on us during "Formalized, Complex, and Costly" — the female and male clones are related. They're biological brother and sisters, and if your head feels like it's about to explode, don't worry, you're in good company. This new information is a hard fact for Sarah Manning to swallow, too.

So here's what we know about the male clones: they're glitching, and it's bad. The male clone who's not glitching, Rudy, finds himself back at the Project Castor base with "mom" Dr. Coady. The male clone who is (or, was) glitching, Seth, finds himself at the other end of Cosima and Scott's latest science experiment. Remember, Rudy shot and killed Seth at the end of "Transitory Sacrifices of Crisis" because he went "stage five" and basically short-circuted. He needed to be "put down" military style, and that meant execution.

Rudy left Seth's body behind. Not wanting to pass up a perfectly good clone body to study, Cosima takes this opportunity to cut him wide open and remove his brain. She might not have the original human geno for cloning, but this is practically the next best thing. Maybe Seth's brain will hold the answers as to why the males are glitching, and why the female clones are sick and dying. I'll be the first to admit I don't know a thing about the biology of most things, so anytime Orphan Black talks science, most of it goes right over my head. Sarah's the same way, thankfully. So when Cosima calls to tel her about what she found inside Seth, she has to break it down in simple terms for her sister. The long and the short of it is that the male Project Castor clones have enough DNA in common with the Leda female clones that they are, scientifically speaking, brother and sister.

Will anything now change between the male and female clones? I don't know. Sarah admits to clone Mark that they're related, and he's completely freaked out by that idea. "Think about it," Sarah yells at him, "Castor and Leda. Two donors. Two originals. Siblings" It makes perfect sense, though. Why create two whole new human beings, when one can just be copied and pasted with a few new chromosomes? (I think that's how science works, anyway)

But will we actually see these siblings come together to figure this whole thing out? Both sides are after the original human geno, which is supposedly gone. The sooner they realize they're both fighting the same fight, it might make that task a little bit easier. The males are just trying to save their brothers, and the females are trying to save their sisters. They should really be trying to save everyone. Doubtful we'll see Castor and Leda trust each other anytime soon, though. Bonding together as this family might be harder than it looks. It will, however, make for amazing family drama.

More like this
Lydia Leonard Is Setting The Record Straight
By Olivia-Anne Cleary
Sandra Bullock, Girlboss Extraordinaire
By Matt Harkins & Viviana Olen
Spice Girls’ Net Worth: The Richest Member Is Wealthier Than The Rest Combined
By Hugh McIntyre
'Bridgerton' Season 4 Will Likely Focus On This Brother's Divided Heart
By Grace Wehniainen and Alyssa Lapid
Get Even More From Bustle — Sign Up For The Newsletter