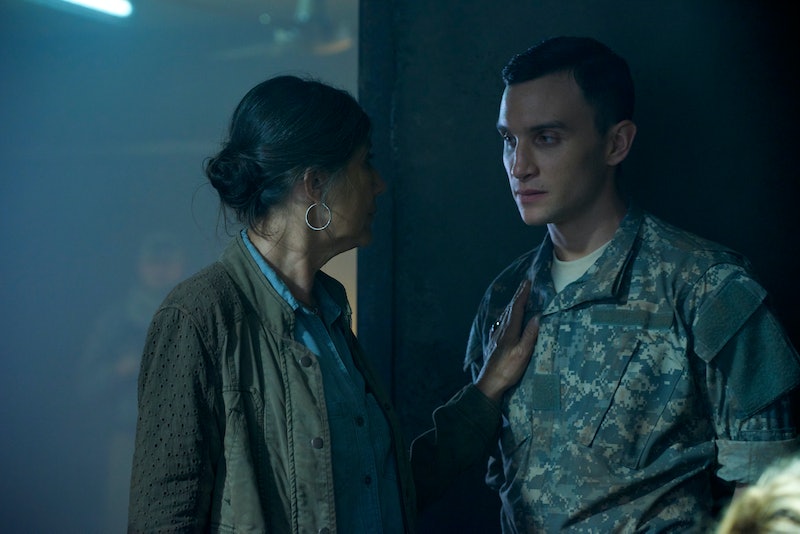 Where in the world is Helena? That's a big Orphan Black question right now, and all we know for certain is that she's been taken by Project Castor, the shady government offshoot that's in charge of the male clones. We don't know what they want, what they want with Helena, or even where they're located. Saturday's episode, "Transitory Sacrifices of Crisis," we at least learn one thing — the woman in charge (apparently) is named Dr. Coady, and she's the male clone's mother. It's not like Dr. Coady gave birth to them, as she quickly explains, but she considers the clones her children. Big question now, what does this mean for Helena, let alone the rest of the clones — both male and female?

Dr. Coady was introduced at the very end of the Season 3 premiere, when she ordered Helena out of the "box." In this episode, she saves Helena once again, as she's the woman who steps in and stops Helena from being water-boarded (YES, Orphan Black went there). Supposedly Project Castor is conducting this form of torture as a stress exercise for her, but Helena is pregnant, and Dr. Coady shuts the test down. She appears to be a caring woman — torture aside — and takes Helena to get some food. But how and why is she wrapped up with Project Castor and these clones to begin with?

Two of the male clones, Seth (with the mustache) and Rudy (with the scar) discuss a "mother" at one point during the episode. After Major Paul (remember him?) comes to see them to hand out new orders, Rudy asks, "is this from mother, or from you?" The way he talks, it sounds like this "mother" is the one in charge of the whole operations, and she's now decided these two clones are going back to base.

Elsewhere, Dr. Coady tells Helena about her children, and we're left to infer that she's this "mother," the matriarch of Castor in more ways than one. She tells Helena that she's got more children than she can count — wait a second. How many male clones are there?

Lets forget about that for a second. This Project Castor camp is somewhere very hot and arid, and the men on the base have very large guns. I mean, it's hard not to assume they're somewhere in the Middle East judging from the building structures alone. And considering twists on Scandal have ruined me, I then immediately assumed that they're probably in like Vermont, and this is all a giant false facade to give Helena the appearance that she can never escape, ever. Is this whole operation even sponsored by the government? What is Castor trying to do? Why are they one second torturing Helena, and the next feeding their own food?

Dr. Coady tells Helena that she's very excited to have her there, even though it doesn't appear that way (the whole, water-boarding thing doesn't really go over to well). Now that Helena's out of her box... now what? Orphan Black isn't big on letting us in on all its secrets till it's the perfect time to explain them all. I have a feeling that whatever Dr. Coady wants, we'll find out the same time our clones do, too.

More like this
Theo James Revealed The Truth About His 'White Lotus' Nude Scene & Fans Can't Cope
By Stephanie Topacio Long
The 'Kenan & Kel' Reunion On 'SNL' Took A Dramatic Turn, Thanks To Keke Palmer
By Brad Witter
Keke Palmer Just Announced She's "Going To Be A Mom" On 'SNL'
By Brad Witter
This 'White Lotus' Symbol Could Hint At A Major Character's Death
By Grace Wehniainen
Get Even More From Bustle — Sign Up For The Newsletter