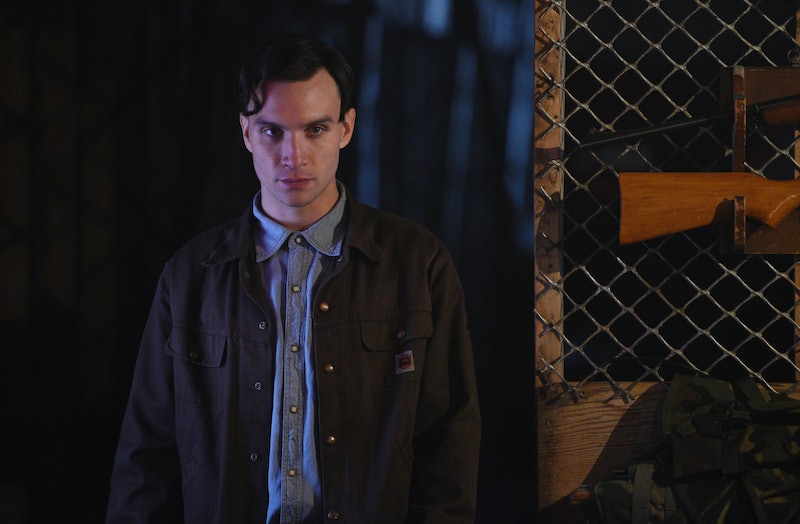 There might be one less male clone for us to worry about. During Saturday's episode of Orphan Black , Mark is killed — or so we think. Is he really dead? It'd be shocking for Orphan Black to off another male clone, considering that Seth was killed in last week's episode. It's not like these clones are a dime a dozen, you guys.

"Formalized, Complex, and Costly" gives us a taste of Mark and Gracie's married life. They're still on the run (following the death of Gracie's father, Henrik Johanssen), but while Gracie thinks they're just getting ready to start playing house, Mark is really looking for answers. Mark thinks some of these answers, including a stash of Johanssen's stolen scientific material and maybe more, can be found with Willard Finch. Mark accidentally kills Finch trying to get information out of him, but that's neither here nor there. Who really matters here is Gracie. Gracie is happy to be married to Mark, and she's OK with the idea of being pregnant, as long as Mark's there for here. However, after a chance encounter with Sarah (while Mark is off accidentally killing Finch), everything changes. Sarah informs Gracie that Mark is a clone, too, and Gracie's little world comes crumbling down around here. And after you've just learned that you're married to a clone (let alone, pregnant with the baby of your father and another clone combined) there's only one person to run to: mom. Gracie returns home, and tells her mother everything. Momma Johanssen is not. having. it.So, she grabs a shotgun and heads off to find Mark. She finds him at Finch's barn, where Sarah happens to be, too. Sarah has just finished telling Mark that 1) Gracie knows everything about him being a clone and 2) the male clones and the female clones are siblings, Mark runs outside, only to be quickly shot by Momma Johanssen. He makes it a ways into the neighboring cornfield, before Momma Johanssen turns the shotgun on him, and that's all we see of Mark. Birds fly away, Sarah freaks out, and we're left to assume that we're now one male clone down.

I'm going to assume he's dead, considering that it's unlikely that Momma Johanssen would miss a shot (because she's terrifying), so now the four known male clones have dwindled down to two. Seth's dead. Mark is probably dead. That just leaves Rudy, and the fourth clone, Miller, who we really haven't seen that much of, but he's on same base with Helena and Dr. Coady. I thought the idea was to keep adding more clones to Orphan Black, not slowly kill them off, no?

If he is alive, though, this would be a great opportunity for him to join up with the female clones. Considering the new revelation that everyone is related, these two sides need to join forces eventually, to figure out what the heck is going on with them in regards their genetic defects. According to Dr. Coady and Paul (REMEMBER PAUL?) Mark has gone 'rogue' as it is, and needs to be brought back to the base. He's already on the run, so why not now run with the females? Sarah could probably use someone else who's willing to do whatever it takes to get to the bottom of this. Cosima can't do it, Helena is physically unable to do it, and Allison is real busy becoming a drug lord. Sarah needs a new clone partner in crime. Maybe it could be Mark?

In the end, all we hear is the shotgun fire. We don't actually see Mark's body to learn if he's alive or dead. My gut tells me he's dead, but I hope he somehow pulls through. Otherwise, Orphan Black is going to need to add 15 more male clones into the mix, and I kinda liked the ones we had already.

More like this
What Does Michael Peterson’s Family Think Of 'The Staircase'?
By Arya Roshanian
The 'Grey’s Anatomy' Season 18 Finale Might Have Had A Sneaky April Easter Egg
By Grace Wehniainen
Everything To Know About ‘The Handmaid’s Tale’ Season 5
By Amanda Whiting
Jennifer Aniston Joked About Ending 'Friends' With Therapy & Divorce
By Grace Wehniainen
Get Even More From Bustle — Sign Up For The Newsletter