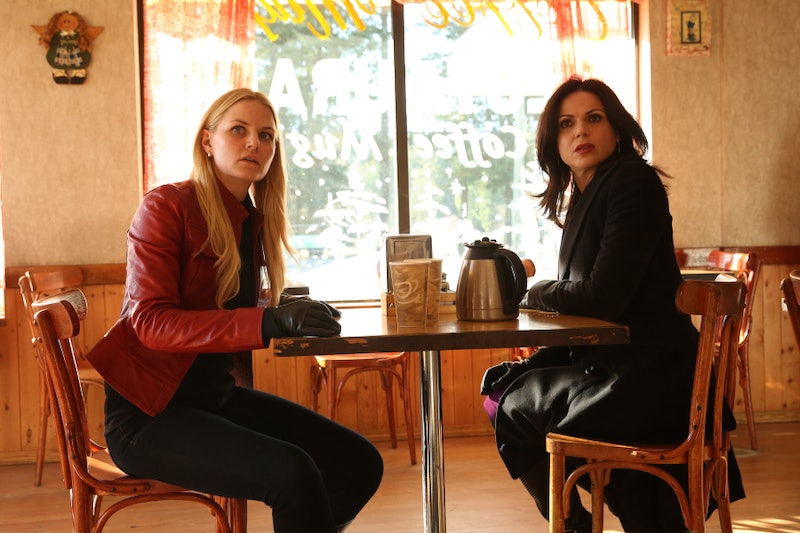 For most of Once Upon A Time's first three seasons, the former Evil Queen Regina and Savior Emma Swan were pretty much sworn enemies. While they shared one important element in common — their son Henry, of course — their relationship was strained at best and downright nasty at worst. Eventually, Regina chose to return to goodness in an effort not only to preserve and deepen her relationship with Henry, but also to give herself a chance to discover forgiveness and true happiness in her life. This change of heart has been a great development for Regina, and has allowed her and Emma to find a new rapport. Now, they join forces for good, not evil — though given how things are going in Storybrooke and beyond lately, that might not last for long.

We already know that Gold plans to turn Emma evil, and in recent weeks, she's shown that darker side she's always had the potential for. As for Regina, she's tried to remain the positive influence that keeps Emma on the right track, but given her own recent trials and tribulations, that might not last for much longer. With only one week left in Season 4, it's anyone's guess as to what lies ahead for two of OUAT's biggest characters, but I wouldn't be surprised if they went down a dark path. After all, both Emma and Regina have plenty of reason to turn to evil, don't you think?

Robin Hood was Regina's soulmate all along, but they only recently found each other... only to face the return of Miriam, who actually turned out to be Regina's evil sister Zelena, who's now ruined Regina and Robin's chances at happiness by becoming pregnant with Robin's baby. Scorned again?

Emma SHOULD have been evil, and what Snow and Charming did in order to prevent that from happening was not only wrong, but as we know, all magic comes at a price...

Regina's constantly fighting against her dark side, anyway

I know, I know, Regina has earned her redemption story, but as she constantly reminds everyone, turning away from darkness is not always easy. What is easy is falling back into old habits, and it could very well happen to our Evil Queen.

Emma has already killed one person, even though it was an accident

I'm not saying that once you kill one person, it becomes easier to kill another, but, well... I guess that is what I'm saying when it comes to Once Upon A Time. Emma has justified killing Cruella because she was protecting Henry, so will she justify everything else she does that's wrong if it means that she's doing it for the "right reasons"?

Gold might force the Author to write Emma & Regina a new, much more evil story

If Gold get his own way and his own happy ending, that likely spells disaster for Emma for sure, and probably Regina, too. If the Author writes it, that's what'll happen and there won't be any way to stop it.

Emma has brought Lily back, and she's always been a bad influence

Lily and Emma have known each other since they were kids but only just learned why they were brought together. While Emma escaped the darkness she should have been born with (or so we think), Lily hasn't, and now that they're reunited again, this could spell bad news.

It will make things much more exciting for Season 5

You know I'm right. An Evil Emma/Regina combo? Now that, I can't wait to see.