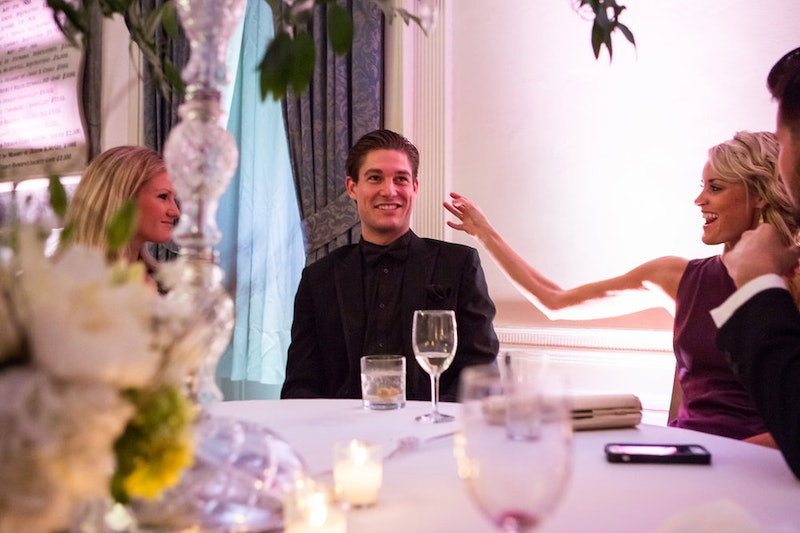 The women of Southern Charm can be hot messes where drama's involved, it's true. However, the men? They're even worse, especially Craig Conover. This season, he's not doing so hot. He might be good looking, but he really doesn't understand what it means to hold down a career — probably because that's something he's never had to do before. Between the fact that he seemed to really piss off his boss and the fact that he doesn't seem to enjoy working in law as much as he thought he would, the show's making the future of his career seem iffy. So what's Craig's deal? Did he ever get his life together, or is he still "working" in the middle of the night and showing up late to work if at all? Apparently, something must have changed about his work ethic, because it appears Craig is still working for the same law firm from Southern Charm .

According to his LinkedIn, anyway. It says that he's been working at the same firm he's been with since 2013 — more specifically, the pharmaceutical division of Charleston's Anastopoulo Law Firm. I'd almost say that's old information since the show made it look like he got fired, but from the looks of things, I think it's still accurate. Especially since he posted this work photo on Instagram just three weeks ago:

Unsurprisingly, he is whining about being at work in the caption, a move that is so quintessentially Craig. Also a typical Craig move: The fact that he keeps an entire wardrobe's worth of shoes under his desk at work. For, you know, shoe emergencies. Or something.

In recent months, Craig's also been cracking into the modeling world, which seems to far better fit his personality. Craig could totally pull off a modeling career and I'd think he'd be way happier that way. After all, he's naturally suited for that lifestyle. He has expensive taste, he's super good looking, and he's excellent at schmoozing — a skill that is a must have if you're going to work in the entertainment world. And now with Southern Charm on his resume, he's basically unstoppable. Ditch the 9-5, Craig! He could make a career out of strutting down the runway, and I'm not just saying that so he'll give us more opportunities to bask in your chiseled jaw, please.

And regardless of where he's working, one thing's for sure: The place he'd rather be is the same as mine.

More like this
'Selling Sunset's Christine Has Finally Addressed Her Oppenheim Group Exit
By Brad Witter
50 Years After Creating Her Alter Ego, Angelyne Is Still Driving That Pink Convertible
By Gretchen Smail
Twitter Has Very Mixed Feelings About The New 'American Idol' Winner
By Jake Viswanath
Kourtney Kardashian & Travis Barker’s Italian Wedding Photos Are Finally Here
By Grace Wehniainen
Get Even More From Bustle — Sign Up For The Newsletter